An Arabian Dhow for 28mm Figures

Recently, I saw a blog post online about a card model of a dhow that was suitable for 28mm figures I'm very annoyed with myself that I cannot remember whose blog this was; my sincere apologies to the author.  However, this is something that I had been considering for myself as a useful adjunct for my Arab slavers (for the Congo game) or possibly for Pulp Alley games set in East Africa. 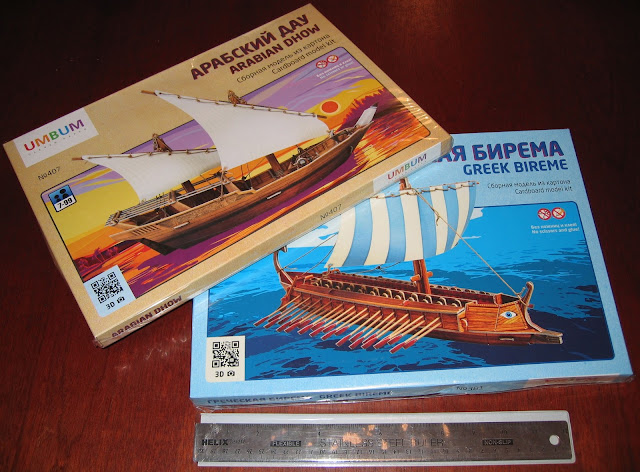 Once the idea was there, it didn't take much effort to find the source of this kit: it was made by a Russian outfit called "Umbum" and sold through the "Russia Best" website.

Interestingly, this website is in English [at least when I view it] and so it's quite easy to navigate.  Even more interestingly, their catalogue lists a number of other ship models which might be suitable for wargames:


There's no scale given for these kits, but the dimensions of the finished models are usually available on the web page.  I thought that I'd take a chance and so I ordered a dhow and a bireme [for my Greek Argonauts].  This article is about the dhow; more on the bireme another time.

I was a little bit nervous ordering anything from Russia, as their postal system doesn't have the best reputation in the world.  However, I figured that at $8 (USD) for each kit plus about the same again for postage it wasn't too expensive to take a chance.

I ordered these models some time before Christmas and in due course, 6 or 7 weeks later, I received my package with various customs seals and labels attached to it.  It's not clear to me whether this timescale is normal when ordering goods from small Russian companies, or whether the Christmas holidays [and their associated effects on postal services] contributed significantly to the delay.  Anyway, I now had my kits... 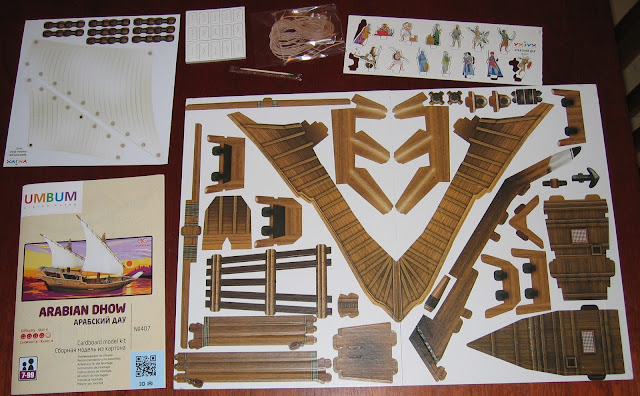 The Dhow kit came in a very large, very flat box.  On opening it, I found the following: 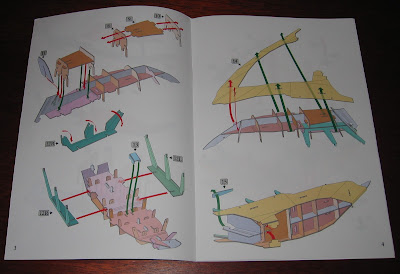 I was very impressed by the instruction manual for this model.  It's easy to follow [it uses colour and simple diagrams very effectively] and it is language-neutral throughout.  Quite a delight!

When I bought it, I took a chance that this model would work with my 28mm figures.  In the picture above, you can see the 15 (!) standees alongside a few of my Foundry Arab slavers.  Allowing for stylistic differences and the unusually thick foam bases, I'd say that the kit's card and my metal models are extremely compatible in size. 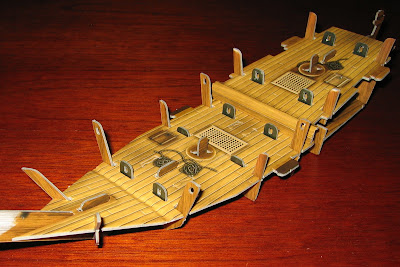 Construction of the dhow was extremely straightforward.  The parts fitted well and were designed to be simply pushed together.

If I had done a "dry" build, I don't think the kit would have taken long to complete.  However, I intended to make this a very permanent model and so I used a paintbrush to apply white glue along the seams at various stages in the construction.  This meant that I had to leave it to dry quite often, thus slowing down the build quite a lot.

One other issue that I wished to address was the presence of tabs.  Due to the push-fit nature of the  model, there were occasional tongues of cardboard intruding onto the deck or the sides of the hull [Note that these should NOT be confused with the protruding rigging points or the supports for the bases of the masts!].

Once the glue was dry, I cut these tongues/tabs flush with the surfaces from which they protruded.  I then applied some paint to the exposed edges of the cardboard to hide them.

After tackling the tabs on the deck, I assembled the hull.  More construction tabs stick out of the sides; these were also cut flush and the raw ends were painted to match their surroundings.

When the assembly was done, I painted all the remaining exposed edges of cardboard with a colour to match the surroundings.  Mostly this was one of two shades of brown, though the decorated prow of the ship, rigging points and some parts of the waterline needed a dark grey.


There's a lot of ropework on this ship!  It may look complex, but the instructions were very clear and easy to follow.  Two things are probably worth mentioning, though:
In hindsight, the rigging took rather longer than the rest of the construction [and wasn't as much fun, either].  However, it does add greatly to the appearance. 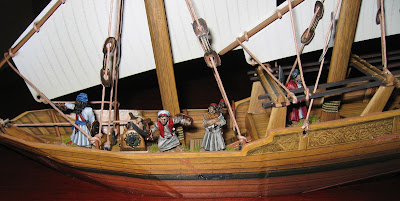 I bought this model to assess its suitability for wargaming.  I'd say that in many ways it has surpassed my hopes in this respect:
Of course, I have to balance this with a disadvantage or two:
So, if you want a dhow, or a whole fleet of them, for gaming then I'd certainly recommend this Russian kit.  I might replace the string provided for rigging with something a bit thinner and softer, though.

Now all I need to do is find somewhere to store the model...