In case you hadn't noticed, "small unit" skirmish wargames are very popular these days.  For myself, I play (or at least, collect models for) both Saga and Congo, though there are plenty of other games which use similar numbers of models.

The common factor in all these cases is that they use a squad (for want of a better term) as the basic group for movement, combat and so on.  In Saga this will be sized from 3 to 12 models and models within a squad must remain within a certain, proscribed distance of each other.  For Congo units are from 3 to 6 models (but may have one or two characters, auxiliaries or other supernumeraries attached permanently to them) and each figure must touch at least one other model from the same squad.  These groupings are fairly typical of many modern wargames.

Where am I going with this?  Well, it's a bit of a pain to have to move every model individually, so some people buy or build "movement trays" to allow the entire group to me moved at once.  The remainder of this article will examine a couple of types of movement frame. 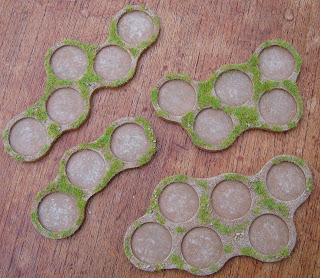 There are a number of different companies who supply movement trays made from MDF; these are from the excellent Warbases.  Such trays are always made from 2 sheets of MDF stuck together; the top one has holes to suit the desired figure bases and the lower one is solid. 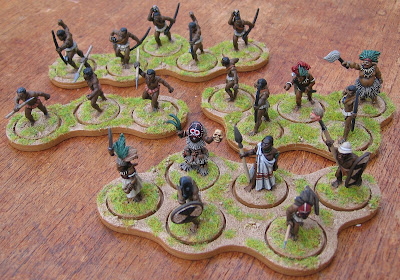 MDF bases are relatively cheap, extremely flexible (the number, size, shape and layout of slots can be customised extensively), but here are two things to consider: 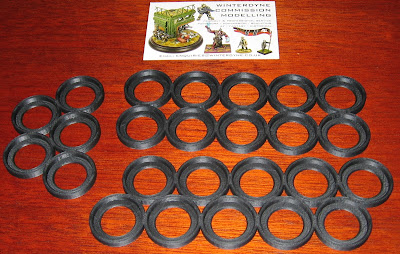 There is an alternative to MDF.  A recent browsing session brought Winterdyne Commision Modelling to my attention.  They make a number of 3D-printed "no effort" movement frames.  I thought that I'd dip my toe in this water as well, so I ordered a few of these recently.

First thoughts: Winterdyne don't produce anything like the variety that is available in MDF trays.  That's OK; it looks to me as if this is a starting venture and I imagine the range of products could increase if there was enough demand.

For now, you can buy trays with: 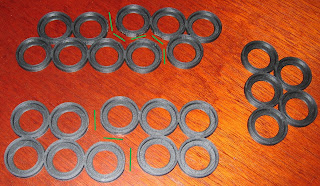 For Congo in particular, I really wanted frames with 4, 5 or 6 slots.  It turns out that the 10-slot frames can be cut apart with a sharp knife and a bit of care, as shown above.  This would allow creation of frames with any number of slots from 2 to 10, though at some effort.

I don't think it would be at all easy to glue bits together (for example, to produce a 12-slot frame); this would probably be better handled by petitioning the manufacturer for different products instead.

How do they look?  Very well, I think.  These frames hold the 28mm figures almost as close together as they would be if no frame were used; there aren't any large, open gaps between them.

However, another thought has occurred to me: perhaps the frames should be coloured according to the faction to which their troops belong.  In genres where many warriors from opposing forces look similar (for example, Dark Ages Europe or tribal Africa or any civil war), painting the frames red and blue would enable friend and foe to be distinguished quite easily.  Of course, this could be applied to the MDF bases as well.

Note: Winterdyne also produces a flexible movement frame where each slot is something like a link in a chain.  With one of these frames, a unit could vary its layout from (say) a line to a compact cluster at different times in a game.  I'm not totally convinced by this concept: on the one hand it's a very clever piece of engineering, but on the other it seems to be an over-complex solution to a fairly simple problem.  Others can make their own minds up...

I'm torn between both these forms of movement accessory.  At the moment, the MDF versions have overwhelming flexibility in shape, size and so on.  However, because of the way they are manufactured a squad based in one of these will always occupy significantly more area than the individual figures.  That's fine (even desirable) for skirmishers, but less suitable for those troops who wish to be nearer to each other.  Of course, "close ranked" MDF trays are also available; these tend to be hollow, rectangular frames which work well enough for drilled troops but which look a bit odd in a skirmish game (or so I think).

I could see the 3D-printed movement frames catching on quite quickly.  If so, then the range of different types might expand quite rapidly and this would make them much more attractive.  Even without this, they are less effort to prepare for the table - indeed, no effort at all if you accept the black colour and the default 5- or 10-slot layouts.

Alternatively, I could just continue to move each model individually, for the ultimate in flexible formations (cheaper, too!).  Ah, what to do... ?
Posted by Colgar6 at 11:36