For some time now, I've wanted to have models of an African village for my games of Congo or Tarzan-based Pulp Alley.  Well, just before Christmas I ordered a few pieces from Grand Manner and they arrived in almost the last delivery before the festive period shutdown.  Here they are, in their finished glory! 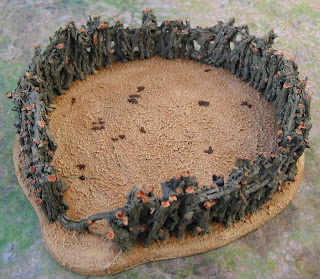 This is the "Large timber circular animal corral" (TA02), retailing at £15.  It's a fairly hefty lump of resin, quite jagged around the top.  I'm amazed at how the manufacturer has managed to cast such a piece at all, as there are so many nooks and crannies which must make it tricky!

Now that's out of the way, here are the good points:
After I had painted the main part of the enclosure, I felt that the interior was a bit barren and lifeless.  To soften this, I painted some of the slightly more raised "lumps" in a dark brown to represent piles of animal dung.  I also gave the "bristles" a light coat of pale green, so that the might stand in for grass stalks or some similar vegetable matter.

Grand Manner make five different patterns of "Mangbettu" huts, but I have only bought three of them (mainly to keep the cost down; each of these models cost £13).  The Mangbetu (spelling varies) come from central Africa; more precisely modern day Zaire.  As such, their huts are very suitable for games of Congo - especially for Forest Tribes.

The three huts shown here are all good models, representing several variations on an obvious common theme.  I particularly like the addition of pots or shields just outside the doors; this gives them a more "lived in" feel.

Two of the huts have painted, patterned plaster on the walls.  This makes them nicely decorative and is completely suitable for the region and pattern of dwelling.  I felt that the sculpting of the decoration was a bit crude, though it's not too noticeable once painted.

Also note that the door curtains of the huts appear to have been modelled from cloth bandage or some similar material.  This is fine, except that on one of the huts (TA10?) a stray thread has escaped and has then been moulded onto the surface of the curtain.  Again, it's not something that you'd really notice unless you know where to look. 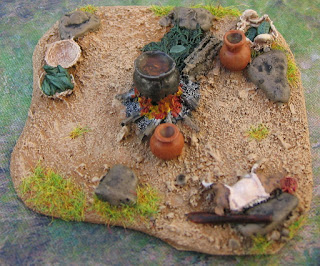 The smallest piece in this collection from Grand Manner is the fireplace, yet it probably took the longest time to paint.  That's because it has a lot of different items on it, each of which required different colours.  Here's a list: 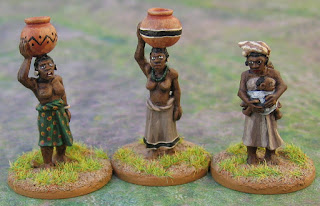 I have some models of African villagers already, but I finished these remaining figures at the same time as the village.  They's probably models from Foundry Miniatures, though I haven't verified that.  Anyway, they're easy to paint and will help to add some life to the village.

Could I have scratch-built the village?  Well, yes of course I could - but it wouldn't have had so much detail and would have taken a lot longer (probably forever, to be honest).  These models are somewhat expensive, though not really that much when compared with a week's commuting, a meal out, or a large Games Workshop figure.  From my perspective, I'm very glad to trade off the money against the time it would have taken; I've ended up with some lovely terrain pieces!

So, what else is needed for the village?  I'm really not sure, though examination of old photos suggests that having chickens running all over the place might be appropriate.  Also, some pictures seem to show racks (for curing skins or to dry leafy crops?) in villages like this.  There's so much more that I could do...
Posted by Colgar6 at 13:53