Today I've not got anything special to talk about, so I'll just show some recently-finished models instead.  These are all for Congo (or could be used for any other game set in Darkest Africa, I suppose). 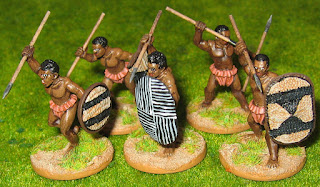 I finished another five warriors for my Forest Tribe about a month ago.  For the purists, they probably belong to at least 2 different tribes; the combination of hide and wicker shields would probably not occur within a single group.  I'm not too bothered by this, though in a game I'll probably try to put them in different squads (perhaps they're allies from a neighbouring tribe?)

These models are from North Star; they're well sculpted and cast.  Natives like this are really easy to paint as there is very little in the way of clothing or equipment to detail!

The Ruga Ruga are mercenaries with a reputation for being flamboyant, though somewhat shabby in appearance (and possibly drug-takers as well).  These six Foundry models will be used by my Arab Slavers, though they could be hired by white men or natives as well. 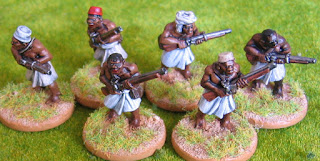 Above are some more armed followers for my White Men column.  They're Foundry models, but very compatible with the North Star or Copplestone "Darkest Africa" figures.  I think these are some of the more useful poses for skirmish games; I'm not a big fan of the "every man in every squad is shooting" look. 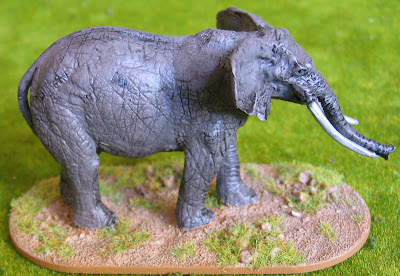 This is the North Star African Elephant.  It's a 3-part model: there are 2 body halves and a separate head.  The body parts fitted together very well, but the head was an exceptionally poor fit.  Still, plenty of filler seems to have worked well in hiding the join (and it's somewhat hidden behind the ears anyway).

Personally, I think this is one of the nicest-looking 28mm African Elephant models out there.  It's also priced quite reasonably. 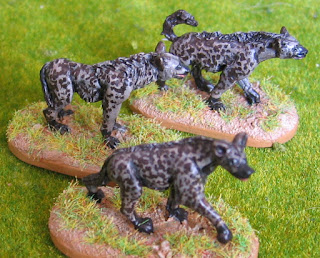 As part of the same package from North Star, I obtained 3 hyenas.  Now I've seen a number of 28mm hyena models and most of them are somewhat...disappointing.  In particular, a lot of sculptors seem to have difficulties with the hyena's classic "sloped" profile, with long forelegs and much shorter rear legs.  These models, on the other hand, are excellent!  They really do look like the animals they represent (though I've possibly gone a bit dark with my painting).

Note that I've based my hyenas on smallish 40mm x 20mm bases, rather than the more common 50mm x 25mm cavalry bases.  They're quite large models (for hyenas), but they're not as big as horses! 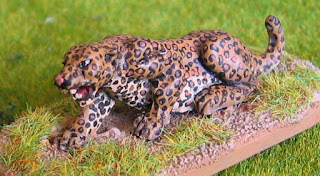 Finally, here's a leopard - also from North Star.  It's a nicely-posed model, though perhaps there's something not quite right about the tail.  Anyway, I'm just glad that I don't have to paint more than one of these beasts!

More forces for Congo - can't be bad, right?  Also, this is a very useful expansion to my collection of African wildlife (currently one lion and a crocodile, I think).

Mind you, I still need some hippos.  I like the Foundry models (waterline and otherwise), but they're very expensive.  Hmm, we'll see...