I've been playing a few games of Dreadball recently.  Dreadball 2 came out at the start of the year and we're finding it to be a distinct improvement; games are fun!

With that in mind, my model-making has been directed towards reducing some of the pile of unpainted miniatures that I have for this game.  At the last count, I had 4 unbuilt teams and a number of stars ("Most Valuable Players"/MVPs), plus some auxiliaries such as fans and cheerleaders.

The MVPs seemed like a good place to start.  Since each was an individual, any one figure wouldn't take long to paint and I ought to be able to finish a few quite quickly.  Here's the tally so far... 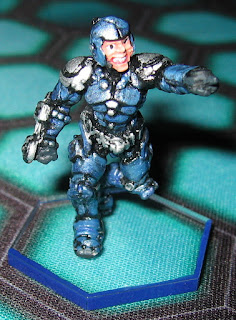 From the manual, Rico is "handsome, well-educated and hugely rich".  He's a show off, loved by the crowd for his showboating style.  Rico also has perfect teeth...

I've painted Rico in the colours for my human corporation team (the "Sky City Slammers"), but of course his armour is rich and glittery compared to their much more modest blue & silver. 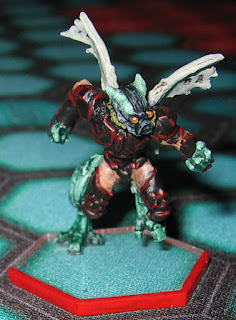 Galdo is a rather foolish Kraaw with massive gambling debts.  Some underworld boss has decided that the best way for him to repay these debts is by starring in Dreadball matches, where he will either earn riches or perish miserably.  Either way, the criminal underworld will have extracted its revenge...

In Dreadball 2, Galdo is listed as captain of the Rebs team.  However, since I don't have that team (and have no real intention to obtain it), I'll use him as a regular MVP who can be hired by anyone. 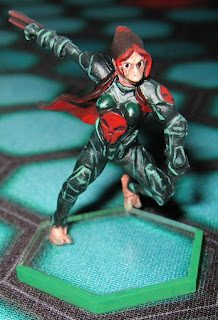 Lyra is an ex-assassin who enjoys the "legitimate" violence of a Dreadball match.  She's fast, nimble and vicious!

It's not clear to me what species Lyra represents.  Her protruding face and the large claws on her feet suggest something alien, but she could just about be a modified human instead.  Like much else about her, this seems to be shrouded in mystery. 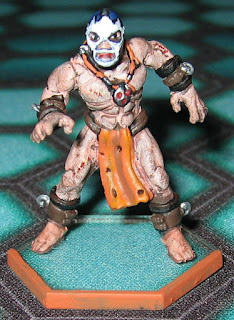 In the past, Asylum has been treated for homicidal, drug-induced rages; he's now allowed back onto the Dreadball pitch.  It seems that remnants of his old personality still exist, though: his style of playing is distinctly aggressive! 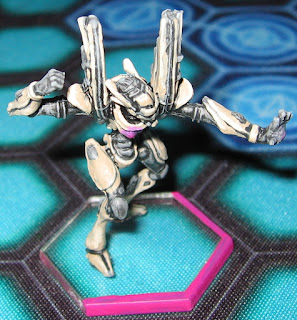 What's an Asterian war robot doing in Corporation space?  Well, its personality banks have been fused with the memories of a Kalyshi rebel and now the authorities look the other way and let it play Dreadball.

It's fast and nimble, but Alo-Khan is still a war machine at heart.  Sometimes it forgets that this is just a game... 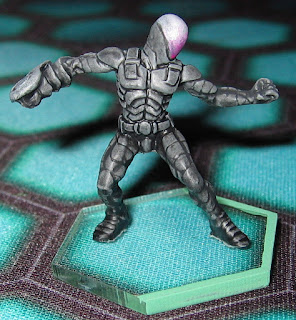 An enigma wrapped up in a mystery and served up as a puzzle?  All that anyone knows about Number 88 is that he/she/it is an incredibly fast and agile striker. 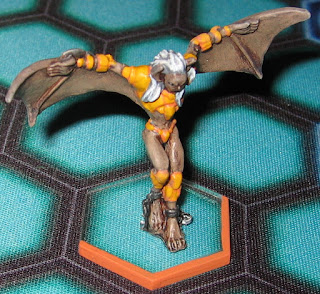 Eko'o is a Yarasa hunter, kidnapped by a Corporation team from his primitive home world and forced to play Dreadball for the amusement and titillation of the masses.  Just don't expect him to be happy about it (and don't turn your back on him, either!) 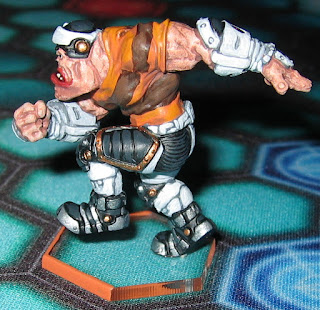 Buzzcut is an ogre, in every sense of the word.  He's huge, savage and sadistic.

I've painted Buzzcut in a vaguely "rugby union" style; he looks a bit like a caricature of a prop forward.  I suppose that I was channelling the rugby players from "Asterix in Britain" at the time... 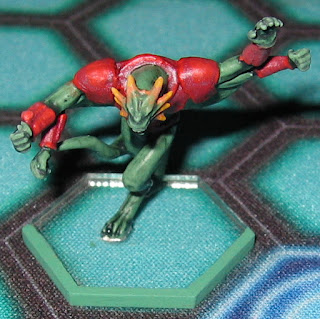 Blitz is a Fyrit; a four-armed, hot-tempered bipedal lizard.  With all those extra limbs, he's especially good at pummeling opponents.

I'm quite pleased to have finished off all these MVPs reasonably quickly.  The individuality of each model meant that I didn't become too bored, as might have happened for a large group of identical figures.

You may have noticed that I've used clear perspex hexes for the bases of these figures.  Obviously, this has required cutting the models from their original bases.  In a few cases I am a bit concerned about the new joints, especially where there are few/small contact points between the model and the pespex.  However, on the whole I consider this to be very successful and I plan to base all my Dreadball teams this way from now onwards, though I probably won't rebase my existing teams.

I expect we'll be playing a few more games in the near future.  If we limit ourselves to one MVP per team per match (seems reasonable) then it will take quite a few games just to try out this lot - let alone the others that I have still to complete!
Posted by Colgar6 at 14:18