One of the things I like about the Hordes of the Things (HotT) wargaming rules is their incredible versatility when it comes to creating an army.  The publication even gives a lot of suggested army lists for a wide range of genres.  This is is just such an example; it's my take on the (good) Kung Fu army, made with 28mm figures.  These are the heroes who defend remote villages from their oppressors, who stand for truth and justice, who fight against corruption and inequality and who kill legions of bad guys with their bare hands.

The army is led by Li Feng, a warrior with enemies at court.  He is a hero general (worth 4AP) and is always closely followed by Mai Ling.  On the surface she's an apprentice hero who wants to see the world, but secretly she has quite a crush on Li Feng.  Figures are from Hasslefree's range of martial artists.
Note that in HotT, heroes have a large movement allowance.  Normally this would reflect the use of a horse or perhaps another type of steed.  However, I think the fast movement still works for these heroes on foot as well.  Firstly, many Chinese heroes can perform superhuman feats, including running faster than arrows or cars (let alone a mere horse).  Secondly, it may just reflect the hero's innate ability to be in the right place at the right time.

The army has another hero (4AP) called Lin Jie.  Jie is a martial arts master who has devoted his life towards perfecting his skill.  He also has a sidekick; in this case the comic relief in the form of Fu Peng.  Despite his bad haircut and his strange antics, Peng is quite a decent fighter in his own right.  These miniatures are also from Hasslefree.

Spiritual support comes from Abbot Chao Kung (cleric: 3AP).  He is, of course, well practiced in protection against the dark arts and other such ethereal issues.  However, if a more physical defence is required then his loyal deacon (known only as "Mountain") will intervene.  Models are from Black Hat Miniatures "Tales of the Dragon Kings" range.

The more mundane elements start with 4 elements of blades (total of 8AP).  These are the better-armed villagers - possibly ex-soldiers or reformed bandits.  The figures are from Redoubt Enterprises "Boxer Rebellion" swordsmen.

A Kung Fu army that fights to defend a small settlement wouldn't be complete without the peasants.  So here are 5 horde elements (5AP) to finish it off.  There's even the village matriarch in the second rank, egging on all the farmers and local tradesmen.  These are from Curteys Miniatures Sung Chinese range - the Rabble and Peasants packs, if I remember correctly. 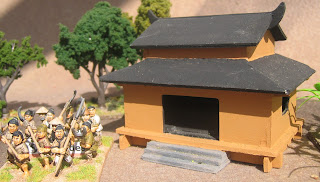 The village is represented by a single outlying house.  It doesn't really look that defensible, but maybe there's a ditch or paddy field just in front of it to make an assault more difficult.  The model is a cheap woodcraft kit that I found through eBay.  It's had some filler applied to cover some of the corner joints.  Although I've painted it, the house really needs a bit more work on it - but I'm clean out of inspiration for such a job.

How does it play?

In theory, the 2 heroes and the blades make up a very powerful strike force.  They do need to be supported by the cleric, else the heroes will be vulnerable to magicians.  The hordes are really there to guard the flanks, although they're more of a speed bump than a significant holding force.  Overall, the army might struggle against a very mobile opponent in open terrain, just like any other mostly-infantry force.

So there we are: 24AP worth of Kung Fu heroes and their sidekicks and allies.  Now all I need is for some black-clad marauders to try to terrorise their village.  No Mexican banditos need apply...