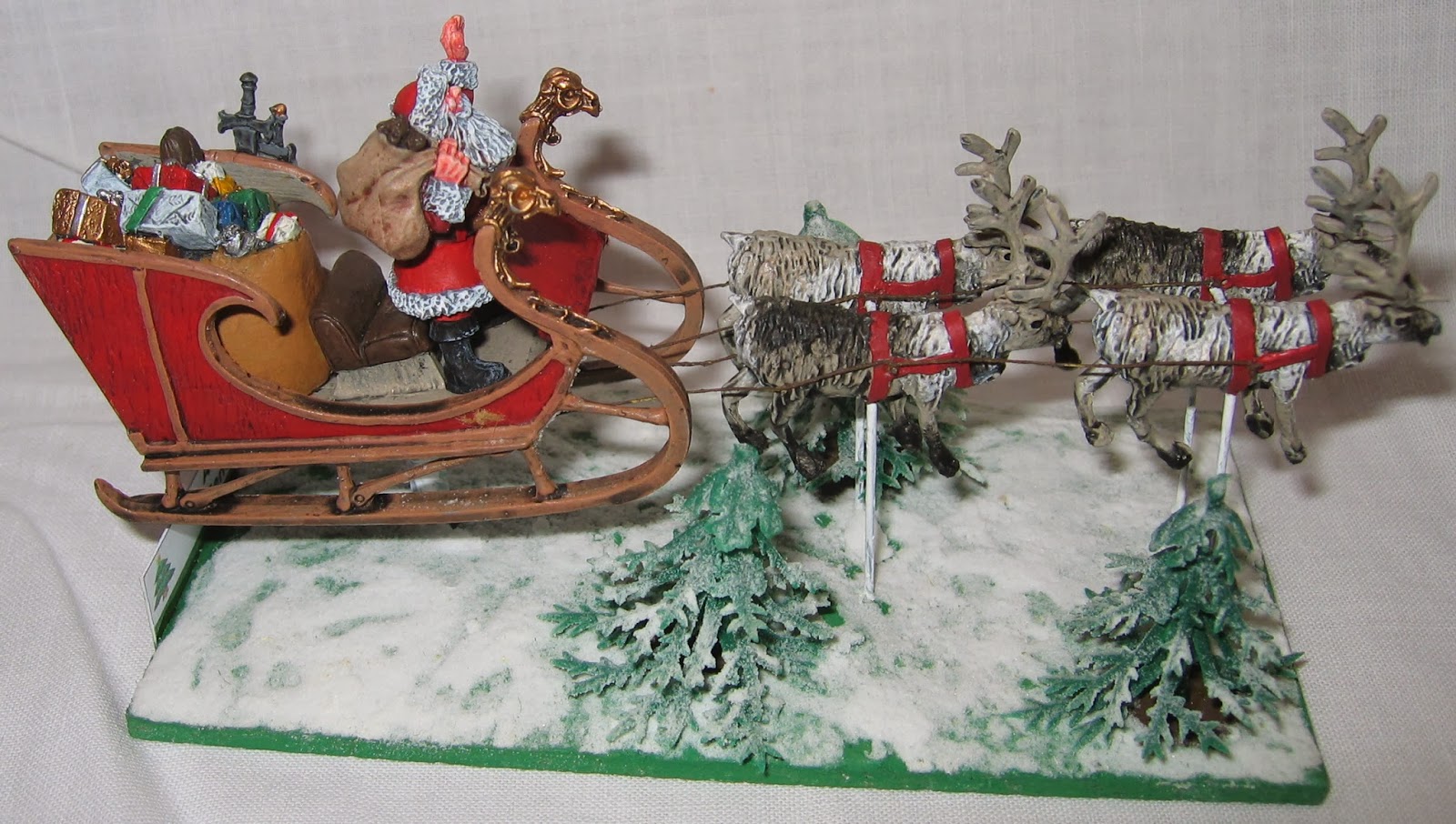 Just over a year ago, I completed my 28mm "Santa" army for Hordes of the Things.  This was something I'd wanted to have for quite a while, but it took me a very long time to find the right figures for it.  Since then, Santa's army is brought out for a special game once a year, just before Christmas. You can read the battle reports for the games so far here:
Since this army has now appeared a couple of times, I thought it was worth devoting an article to its construction. 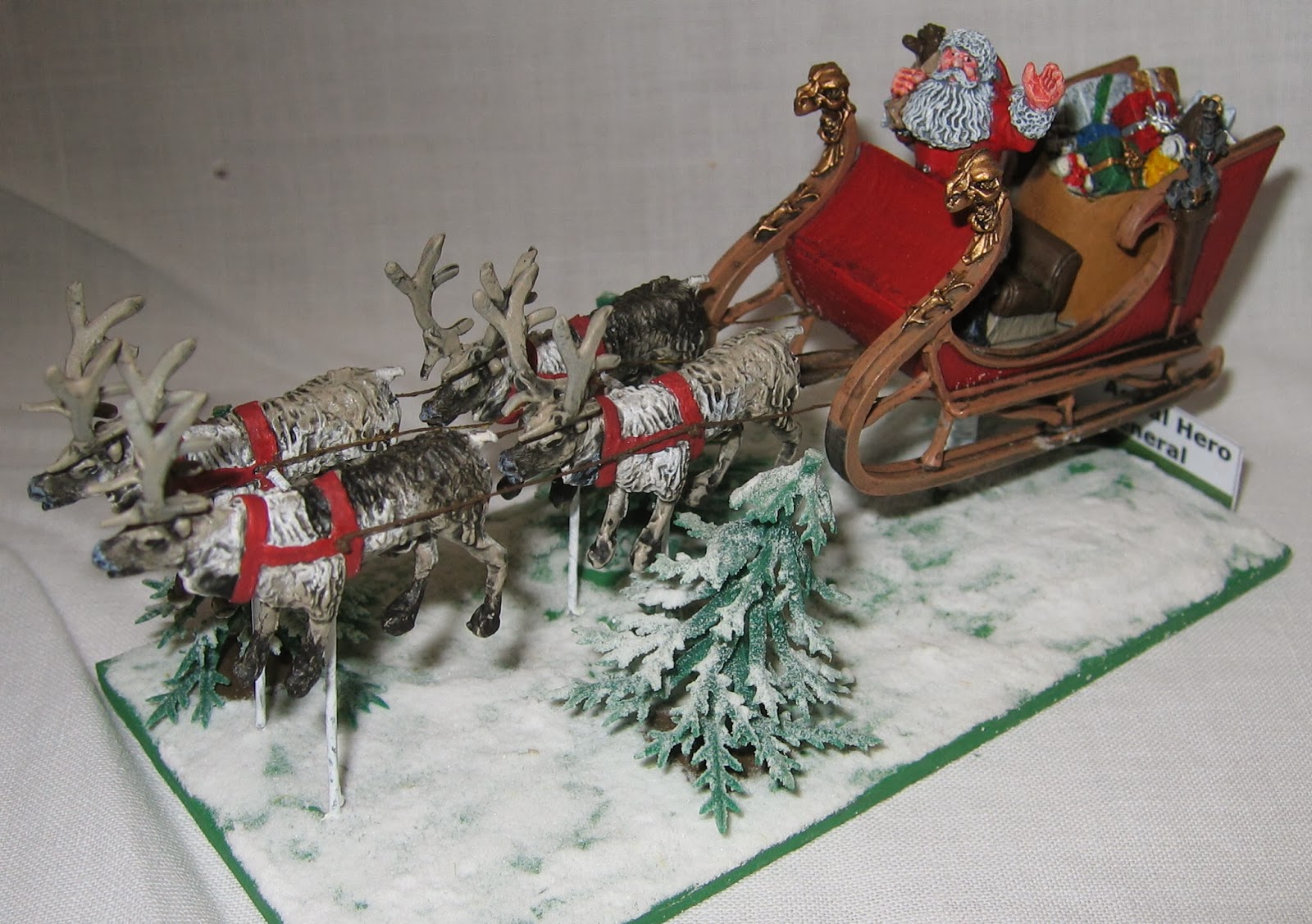 There's no real doubt about how Santa is classified in this army: he cannot be anything other than an Aerial Hero General!

As might be imagined, this was by far the most complex piece in the army to make.  It's made up of parts from several different sources: 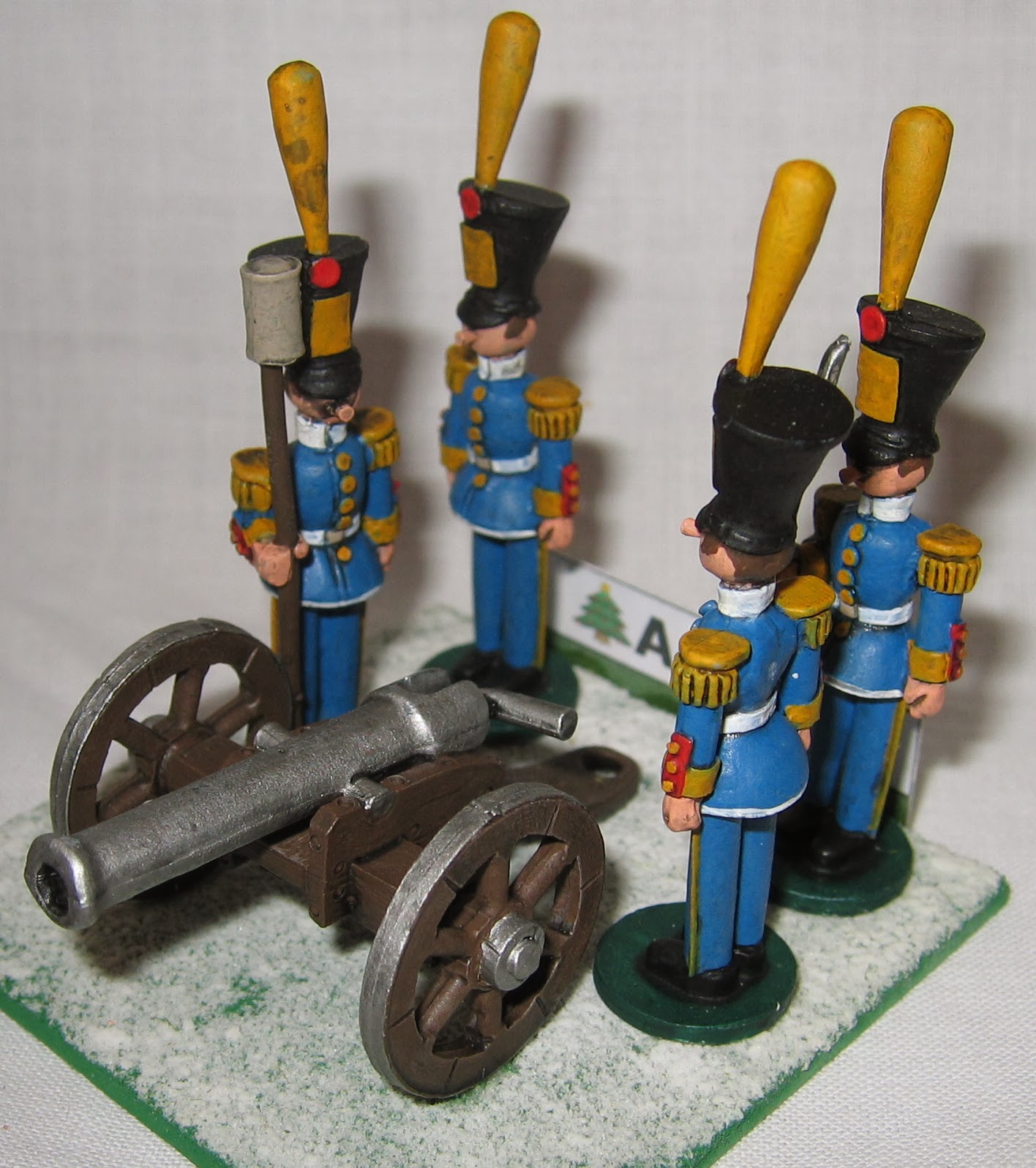 This is a set from Eureka's "Toy Town" range.  I've tried to keep the painting very simple for these models, with only the most limited shading.  The soldiers are rather tall models; they stand well clear of 28mm human figures, but I suppose that's OK since they're just mannequins.  So far, their toy cannon hasn't achieved anything very much in any battle in which they've participated... Santa's elves have formed a militia and have armed themselves with a mixture of rifles, pistols, sten guns and a flame thrower (perfect for dealing with recalcitrant snowmen!)  These models come from Wargames Supply Dump and can be found in the Santa Claus Wars range.  The sculpting is a little crude, but they're very characterful models and an unusual subject matter.

Apart from Santa, what might you find at the North Pole?  With a bit of a stretch of geography, some polar bears could be included; here's my version.  The models are from Wargames Foundry: GPR 19 Bellicose Bears.  Officially these are brown or grizzly bears - polar bears should have a somewhat different shape, especially for the head - but I couldn't find any polar bear models.  They've been given a "polar" colouration anyway; that's good enough for me. 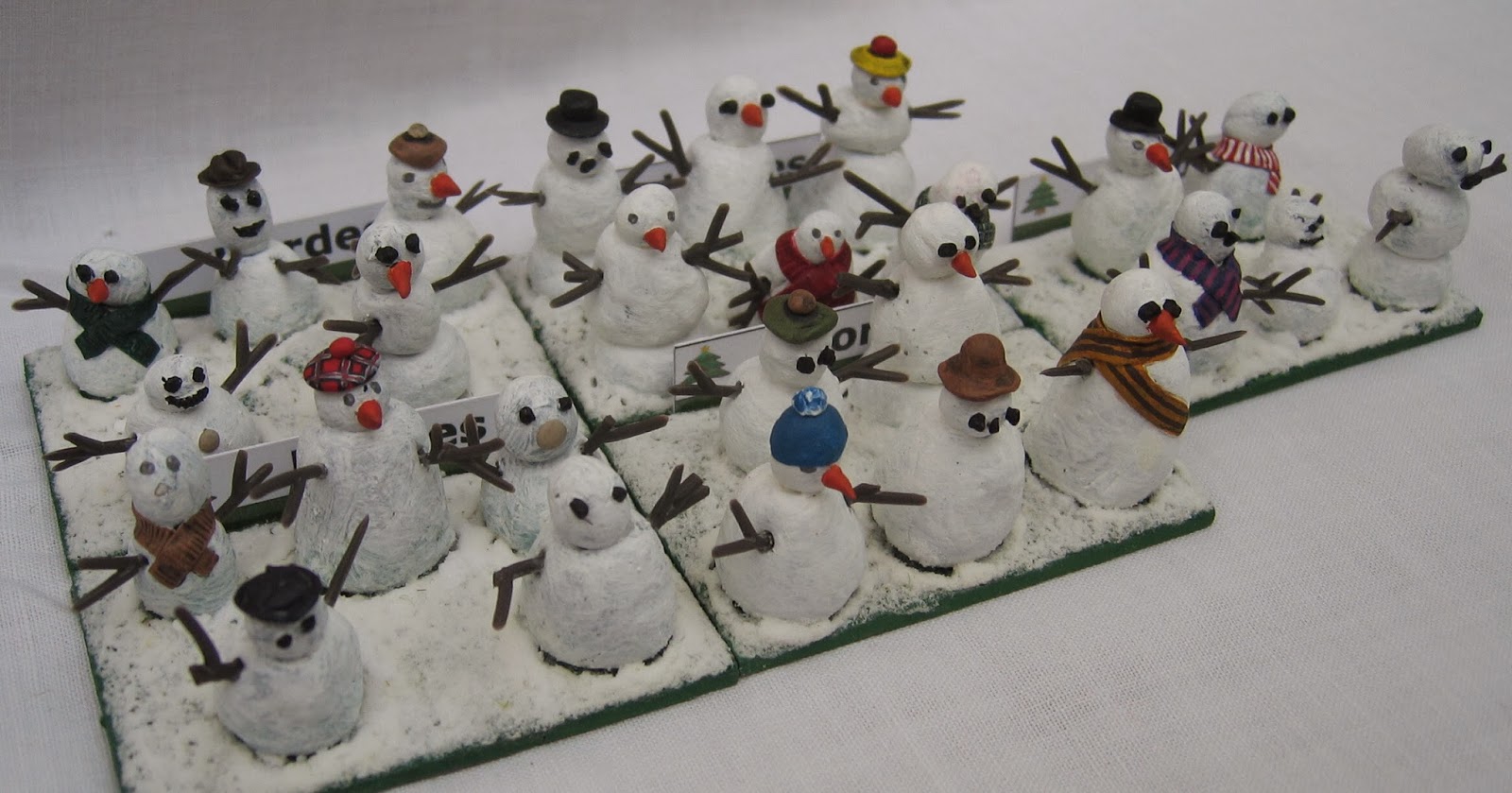 There are actually a few manufacturers who make 28mm models of animated snowmen.  However, I didn't use any of them for 2 reasons.  Firstly, none of the models really appealed to me and secondly, to make a large horde from metal models would have cost a considerable amount.

Instead, I made my own snowmen from modelling clay.  Each figure has either 2 or 3 balls of clay for a body.  Scarves, hats and "carrot" noses were added from green stuff.  The "coal" eyes were small pieces of grit, picked out from one of my tubs of basing material.  The arms are clipped-down branches from plastic tree armatures, made by Woodland Scenics.

The bases on all the models and the bodies of the snowmen were painted in an appropriate undercoat (green for the ground and grey/white for the snowmen).  When they were dry, these areas were covered with white glue and were then sprinkled liberally with Bicarbonate of Soda.  This can be obtained readily from any pharmacy (cleaning product) or supermarket (baking section) and it makes very cheap model snow.

This was a really fun army to plan and build, though it took a very long time to become reality.  I still don't have a really appropriate stronghold for it, though in the past it's been suggested that some of the Lemax products might work.  Sadly for me, these aren't readily available in the UK so I'll just have to keep looking.

However, this army does have its own dedicated dice:

Finally, Merry Christmas to one and all!
Posted by Colgar6 at 14:50