It's the start of the show season, at least for me!  In early May the Carronade show occurs, run by the Falkirk and District Wargames Club (FWDC).

This year, as last year (see here for 2018), it was a fine spring day.  My son A. and I caught an early train from Helensburgh to Falkirk and walked from the destination station to the high school where the show is held.  There we met up with my friend Steve and waited outside with many others until the doors were opened at about 10:00.

As always with my show reports, this article is not an attempt to document everything that was happening, but rather it is a personal account of what we did on the day.  I'll leave it for others to provide a full photo dump.

Here's the bottom line: it's a large show which was very busy in the morning and rather quieter in the afternoon.  We were there from the first opening until packing up time and thoroughly enjoyed the experience.  So, what did we do?  We played some games, did some (well, quite a lot of) shopping and marvelled at some boards, all mixed up throughout the day.

Pretty much the first thing that we encountered was a gigantic fantasy pirate setup.  From memory, the table was 18 feet by 6 feet (!) and it was an incredible display.  There were many, many little details; we kept coming back to see how many more we could spot.  For example, my son noticed a woman taking a bath in the upstairs of one of the buildings; he told me not to look.

It would be impossible to remember everything about this display, but here are some of the things I remember:

Here are a few of the better pictures I took of this display: 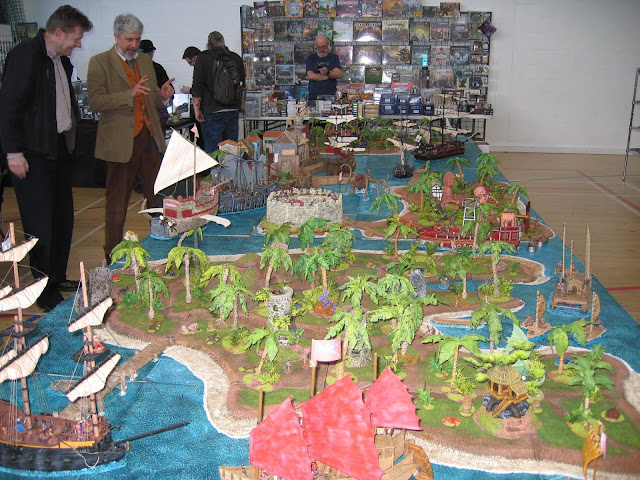 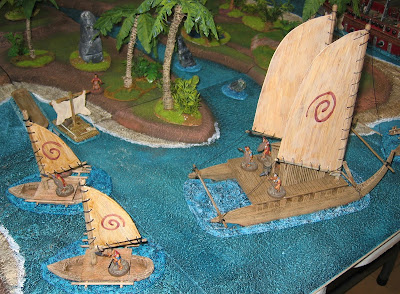 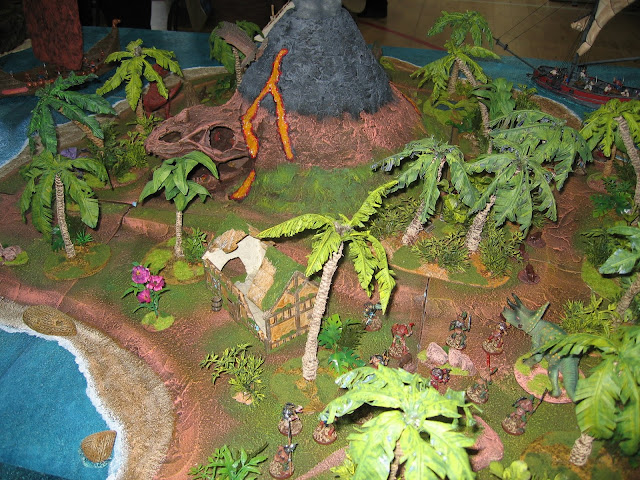 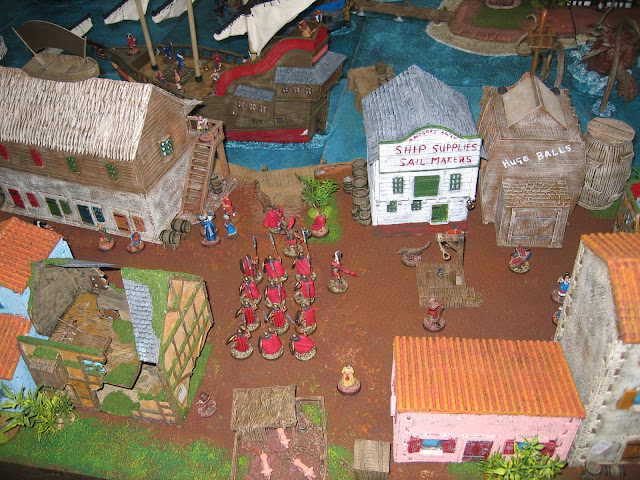 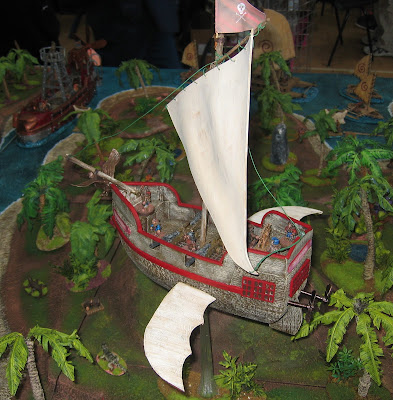 After our encounter with the pirate table, we found ourselves playing a quick-n-simple Monty Python and the Holy Grail game using the range of figures from Studio Miniatures.  There was relatively little to this game - just a series of branching paths which led to different encounters - and the only player choice was to go forwards (in a random direction) or to retreat to a previous junction, but it was fun!  Anyone who knows and loves the film will instantly recognise all of the events. 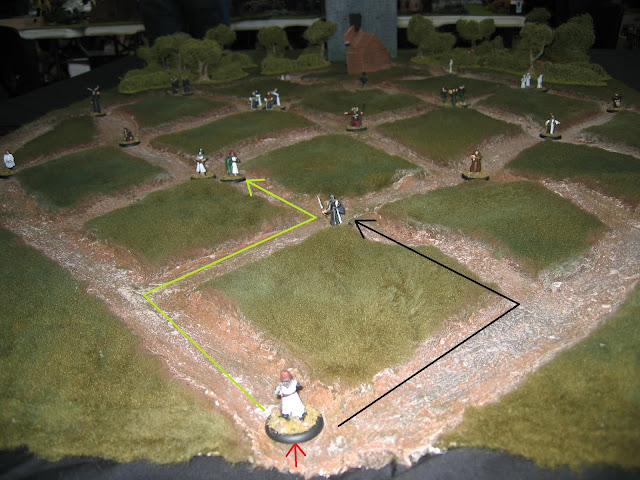 I chose to play the brave Sir Robin, while A. played Sir Lancelot and Steve (who joined in slightly later, having been caught up in a discussion at another table) took Sir Bors (?).  Each of us progressed through various encounters, usually moving forwards but occasionally having to go back to the start. 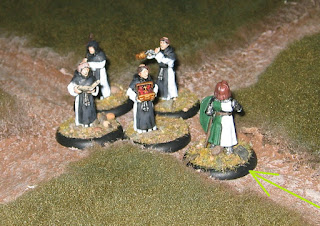 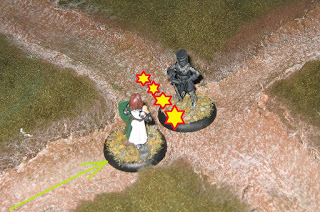 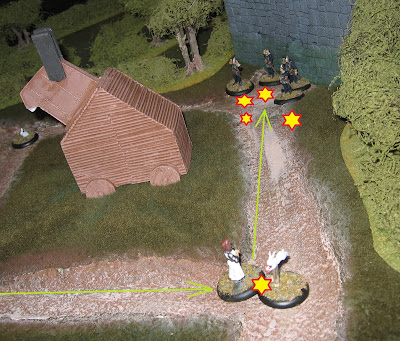 Eventually, Sir Robin met the white rabbit - but this was OK as the monks had previously given me the Holy Hand Grenade of Antioch and I defeated the little bugger.  Following this, Sir Robin drove off the taunting guards and was the first knight to reach the castle... 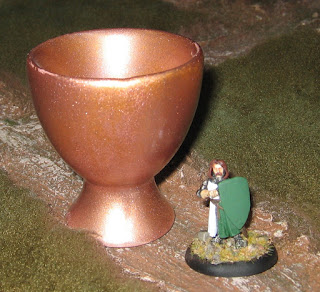 ...where he found the Holy Grail (which I got to keep and take home.  It's very nice).  So, I won my very first game of the day!

Another display caught my attention; this was a 28mm rendition of Stalingrad or some similar WWII battle.  My interest here was in the model-making, as I've been looking for inspiration on how to complete my own ruins (for Frostgrave, mind).  Well, this table certainly did have ruins!  Here are a couple of pictures, for reference: 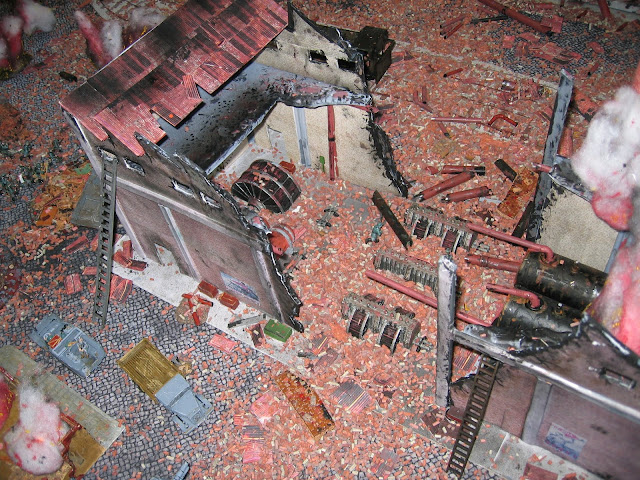 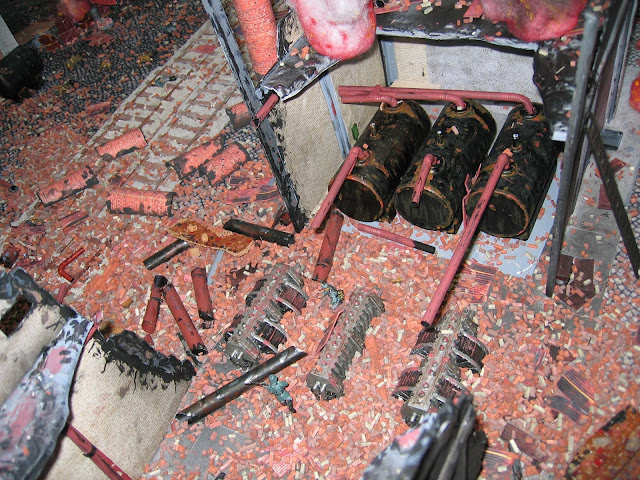 A little while later, we came across a group who were hosting a pod-racing game.  This used the Gaslands rules (from Osprey).  As I understood it, there were no special adaptations for the Star Wars setting, other than the natives who would occasionally shoot at passing racers. 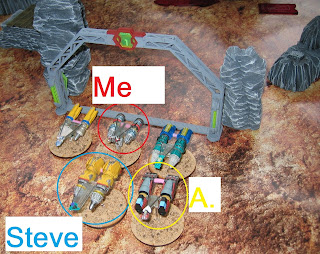 There were 5 players; the three of us and a couple of strangers.  Our hosts explained that the race was a (fairly) simple figure-of-eight, passing through 4 gates to mark our passage.  Oh - we were all armed and could shoot at each other as soon as we had passed the initial gate... 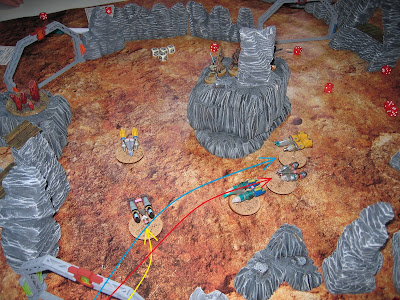 So, we all set off and quickly got the hang of the very nicely-made perspex movement templates.  Some of us chose to go one way around the central rock formation towards gate 2, whilst others chose a different route. 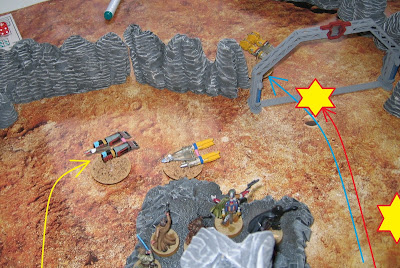 Shooting was generally savagely effective.  By the time the leader (Steve) reached Gate 2, two of us (me and another guy) had succumbed to gunfire.  I did at least reach the second gate, if only just! 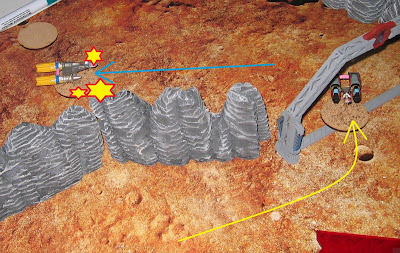 Shortly after that, Steve was wiped out, leaving just the other stranger and A.  Even that didn't last long, as A. managed to swerve through gate 2 and shoot the remaining opponent out of the sky.  Our hosts gave us each a die to take away.  As victor A. got 2 dice and a small packet of Haribo sweets.

Weapons fire in Gaslands does seem enormously powerful; even the best of us barely made it around 1/3 of the track.  We were told that in Gaslands terms, the weapons being used in this particular scenario were actually quite middling in power.  Hmm... 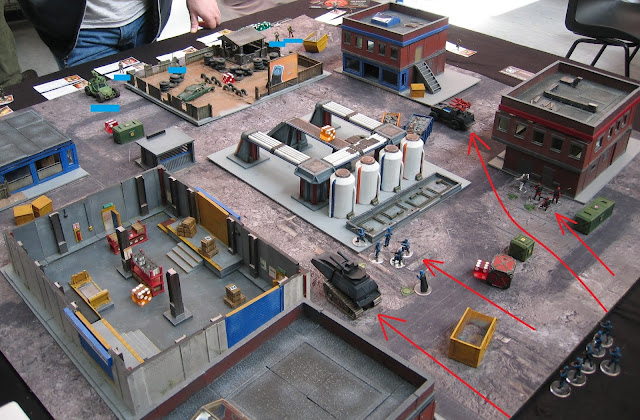 After lunch, we entered our 3rd game of the day.  This was a skirmish with the forces of Cobra versus G.I.Joe and friends, using the Advanced Song of Blades and Heroes rules.

My son and I took the bad guys, at least in part because I wanted to control the tank and the Cobra commander (who, in cloak and helmet, bore a passing resemblance to Darth Vader).  We had 2 vehicles, a few characters and many minions; opposing us were about half a dozen goody-goody heroes and a jeep/dune buggy. 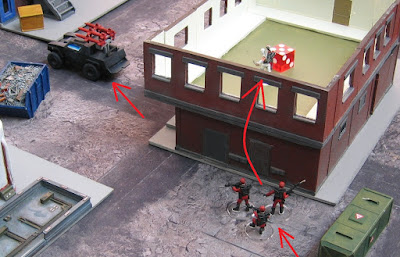 Early on, A.'s white-clad ninja type scaled the walls of an office or warehouse to look for a minor objective (the red die). 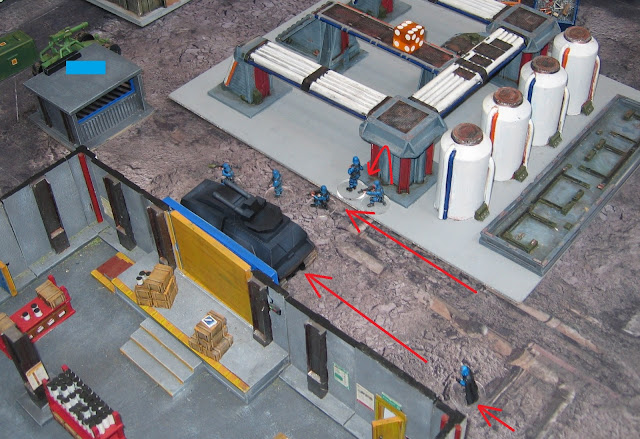 Meanwhile, I sent my forces surging forwards, partly to attempt a major objective (the orange dice) and partly to try to pin down the Joes with my tank and my squad's firepower.  Unfortunately for me, my minions failed repeatedly to climb onto the gantry which held the nearest orange die - and my commander was lurking too far in the rear to be of much assistance. 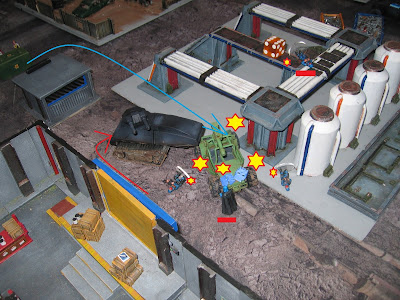 For several turns, I had been needling the enemy dune buggy with rockets from my squad's missile launcher.  Suddenly it surged forward and ran down almost all of my troopers - not very sporting, I thought!  Considerably annoyed, I spent a couple of turns shooting it with my tank, finally finishing off the vehicle by ramming it.

Meanwhile, the sole trooper from my doomed squad who had managed to get near the orange die/objective was pinned down by fire from the heroes. 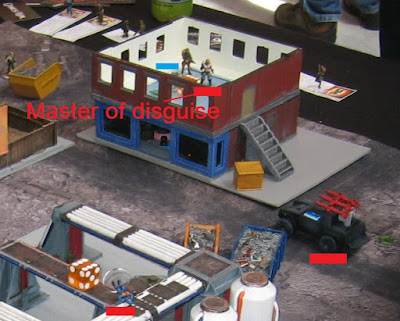 Here's a fun thing: one of the Cobra characters was an infiltrator whose disguises were so good that he could replace any enemy figure.  We chose the moment when 2 of the G.I.s were attempting to claim a major objective in one of the further buildings.  My man revealed himself to be one of the pair and caused consternation to the remaining enemy.  For several turns, they (and another G.I. who joined in from nearby) squabbled and fought until, sadly, my character was defeated.  However, he had delayed the opposition considerably in their pursuit of objectives. 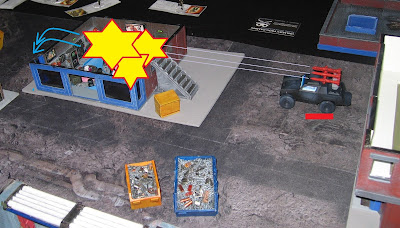 We weren't prepared to let the good guys take the objective easily, though.  When they finished off our spy, A. opened fire on the building with his Stinger rocket truck.  He blew off the entire top floor, thoroughly destroying the objective in the process.  Sadly (for us), the 2 G.I. heroes in the building managed to leap clear at the last moment.

Despite our best efforts, the G.I. Joes managed to claim the last of the 3 minor objectives near their start line in the next turn, thus winning the game.  We (Cobra) had only claimed 1 minor objective, though it was almost certain that we would have scored the 2 remaining majors within one or two more turns.  Ah, well - it was a fun game, even if we lost (and I did kill that irritating Striker buggy).

Game 4: The Hunt for the White Stag 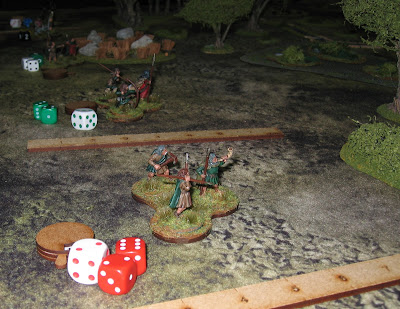 For our final game of the afternoon, we decided to go hunting.  The setting is somewhere in the British Isles, the time is around 800 AD, so it's the "Dark Ages".  Each hunting party (there were 5 players) consists of the main guy (or gal) plus an archer and either a spearman or a dog handler: 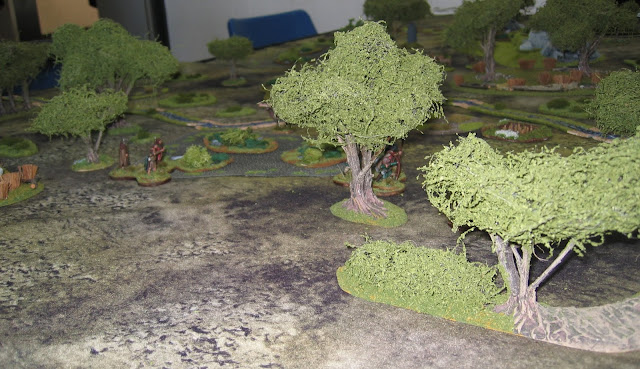 It's amazing how the hunters just vanished into the landscape after a turn or two! 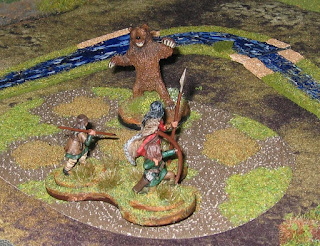 Various wildlife was discovered; some of it was quite aggressive, though everyone other than myself did manage to kill at least something.  Even the bears and wild boars (which should have been quite dangerous) seemed tame; they all rolled really poorly and no hunters were injured. 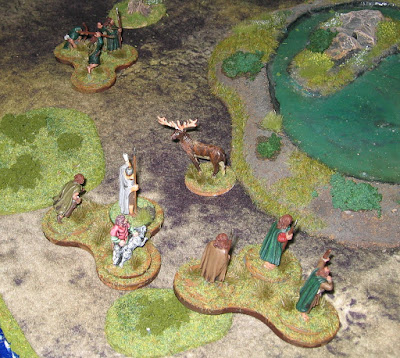 This stag looked genuinely shocked when it was attacked by most of the hunters all at the same time. 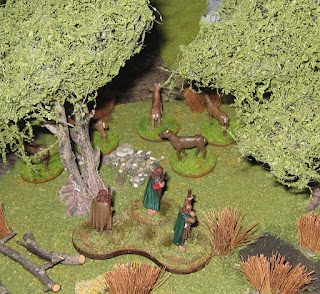 I thought I'd found the motherlode when I came across this many deer - but they all escaped my attempts to slaughter them.  My guys really couldn't hit anything in this game! 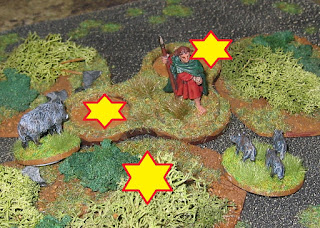 Finally, I stumbled across a family of wild boar and managed to kill one of them.  This seemed to enrage the other adult; it gored two of my men in quick succession.  These were the only casualties suffered by any of the hunting parties, despite the other players encountering far more wildlife than I did! 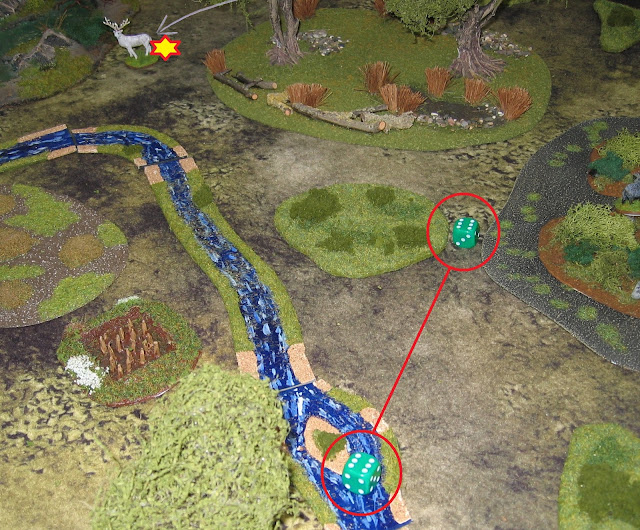 Finally, the whole point of the game - the white stag - appeared.  Our host spent several minutes telling us that the player to kill this animal would win the game, or we would all lose if it escaped.  He also made a point of explaining how it was harder to kill than the other creatures, and more dangerous too.

On the turn that it appeared, Steve was the only player with any hunters in range.  His archer shot at the white stag and immediately threw the double-six required to slay it.  It was a very abrupt end, but none of us begrudged Steve his win; we'd all enjoyed both the premise and the mechanics of this game. 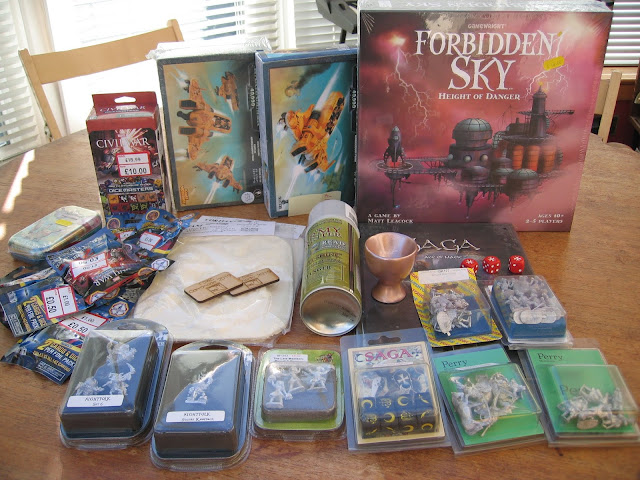 Finally, it's common to show pictures of loot acquired at a show - and who am I to go against this custom?  I went a bit overboard this time, I think.  Here's as much of it as I can remember:
Too much?

Last thoughts?  This was a good show, with enough choice of public participation games (we didn't run out of things to try during the day) and some nice displays.  We were there from before opening time until the dying moments when exhibitors started to pack up.  Possibly I spent too much money, though I doubt that the traders at the show would agree with me!

The return journey on the train was straightforward and fairly quick, though we were hot from the walk to the station and this was less than ideal (not the train company's fault, of course).  I'm pretty sure I slept for at least some of the ride...
Posted by Colgar6 at 18:11