It's taken me a month to get round to writing up this game.  I can still remember the overall result, but I have probably forgotten many of the details.  Still, I have the full set of pictures, so I'll just try to spin the best yarn I can from those, filling in the blanks where necessary...

OK, game 4 in our Congo campaign is set in a forest.  Both columns are exhausted and are searching for parts of 2 mysterious statues (one obsidian/black and one jade/green).  Each statue is split into 3 parts which are scattered around the table.  Victory conditions are weighted towards the side which collects the larger number of pieces, with a hefty bonus for gathering all three parts of either the jade or the obsidian statue.  Note that my painting for these statues was a bit rushed and so the bits of the jade statue are a lot darker than I had intended.  They look almost black and are easily mistaken for bits of the obsidian statue. 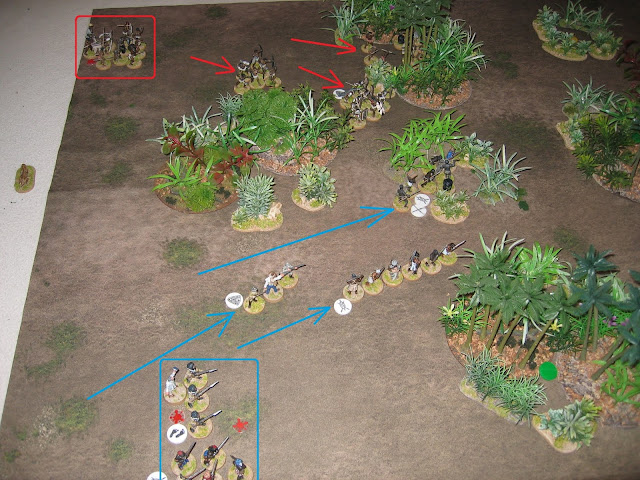 Both columns advanced and easily picked up one nearby piece of statue.  The only real difference at this point was that Mary's forces moved a bit more recklessly, covering more ground but picking up some stress tokens (or at least, not rallying from those inflicted by the pre-game exhaustion).  Ujuwa's tribesmen were a bit more circumspect.

The first significant event of the game occurred when one of the Ruga Ruga picked up a lost item... 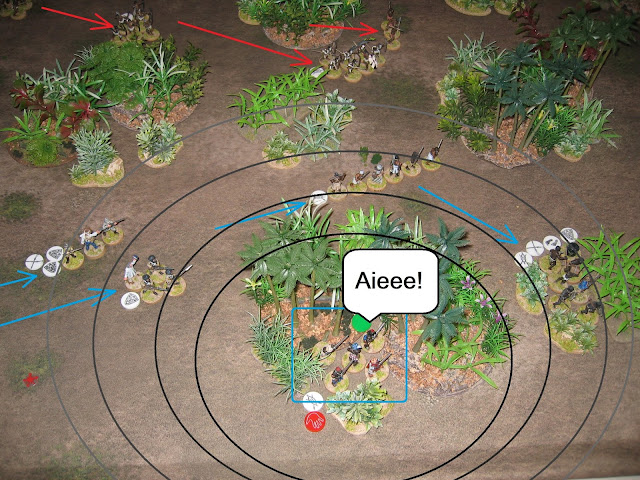 Realising too late that he had touched a forbidden totem, the man screamed and screamed.  His cries of horror unsettled everyone within earshot.  [That is to say, pretty much all of Mary's groups suffered a Terror stress token, apart from the Ruga Ruga themselves - who drew a red Panic token]. 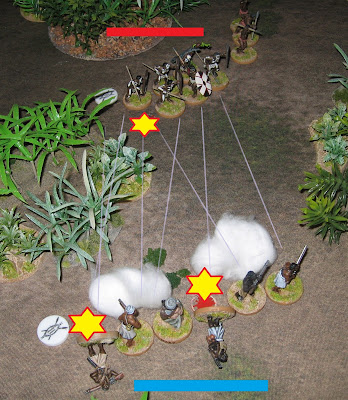 Moving on in the thick jungle, Mary's ascaris suddenly realised that they were marching parallel to - and close to - Ujuwa's warriors.  They opened fire and felled one of their opponents, but the tribesmen threw assegais back and knocked out 2 ascaris in return.  Then, both sides vanished back into the vegetation. 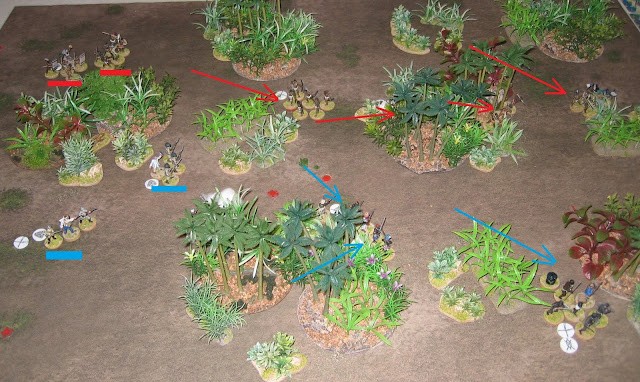 By mid-game, both columns had become very strung out and scattered, though there was relatively little contact between them.  From memory, each side had collected 2 statue parts at this point.

Just as Mary's advance guide (hired young warriors) collected another piece of statue, Ujuwa cast a successful ritual.  Monkey poo was thrown at the men by a bunch of treetop primates, but it did little more than annoy them. 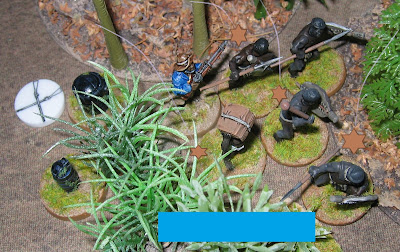 Mary's warriors now had 2 pieces of the black statue, whilst another group [the Ruga Ruga?] had a green piece.  While it was unfortunate that these 3 pieces weren't all the same colour [as it would have scored a lot more!], at least holding these would prevent Ujuwa from collecting a matched set as well. 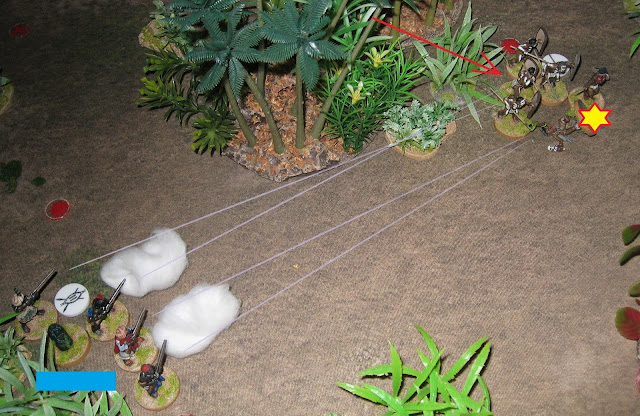 As they left a dense thicket, the Ruga Ruga caught a glimpse of the witch doctor through a gap in the forest.  He was casting his evil spells on their friends, so they immediately opened fire on the group of tribesmen.  Only one hit was scored, but when we rolled for casualties it was Ujuwa himself who took the bullet.  That'll put a dent in his plans! 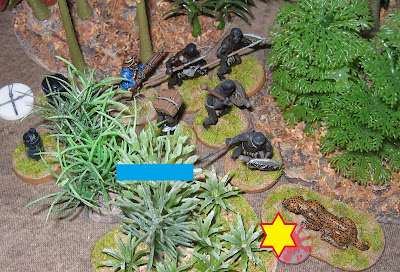 Meanwhile, Mary's hired warriors were having a busy time!  Firstly, they fought off - and killed - a leopard which ambushed them... 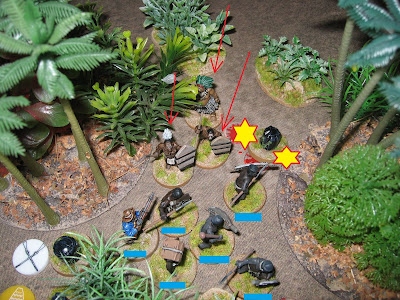 ...and then they were assaulted by some of Ujuwa's warriors, led by a chieftain.  Mary's men were slightly outclassed, but they fought off the attackers, killing 2 and forcing the others to retreat.

When the dust settled, the victors realised that the tribesmen had left behind a piece of the onyx statue behind.  Mary was ecstatic, as this now gave her three matching parts - indeed, they were all held now by this single group of hired warriors.  Ujuwa was correspondingly despondent: he was wounded and this lost skirmish was very costly. 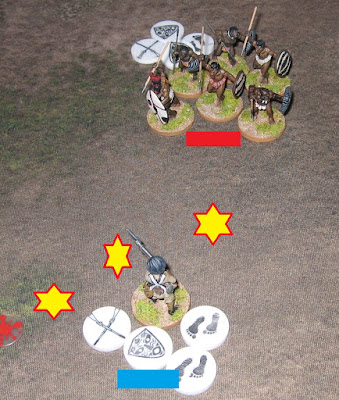 Elsewhere, more tribal warriors fought Mary's soldiers to mutual exhaustion.  The soldiers were almost [but not quite] wiped out, losing their Doctor along the way.  This game was very hard on named characters... 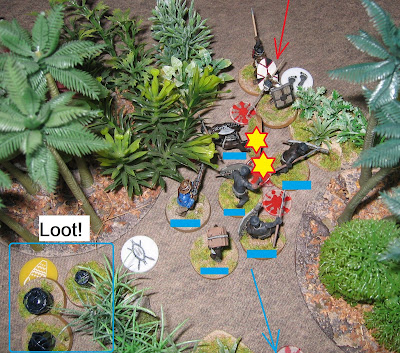 Back at the main event - and with only 1 turn left in the game - Ujuwa's last 2 warriors [in that area, at least] made a last-ditch attack on Mary's tribesmen.  They were outnumbered quite considerably and the odds didn't look good, but the amount of loot to be gained was almost certainly game-winning and so the risk was taken.

In a stunning upset, both of Ujuwa's men felled their opponents, whilst Mary's disorganised warriors failed to make any impact.  They fled precipitately, leaving the jubilant tribesmen in possession of all three parts of the black/onyx status as well as a rather fine leopard skin. 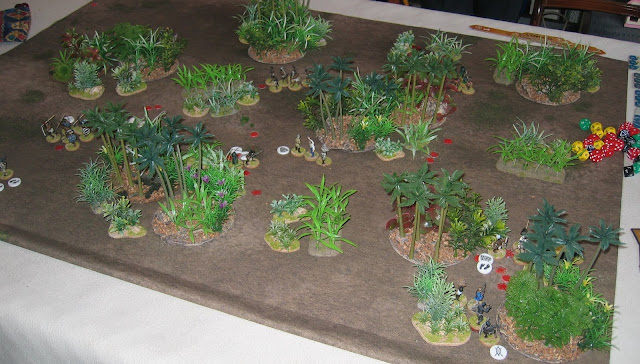 As the turn limit ran out, there was no possibility of Mary recapturing the onyx statue.  That meant Ujuwa had won a crushing victory, with 4 [or was it 5?] pieces of the statues in his possession against Mary's 1.  The witch doctor also had the loot [leopard skin] and had knocked out Mary's doctor.  Against this, he was injured himself and had lost his chieftain.  Truly this game was rough on named characters!

In many ways, it was a somewhat unusual game.  There was relatively little fighting, as both sides were too interested in cajoling their flagging troops into moving faster and further in the race to the most distant objectives.  When there were clashes, they were mostly side shows with little real impact on the overall result.  In the end, only the fight for the 3 parts of the onyx statue had any real significance: winning this would determine the game's winner conclusively!