This year, I'm well prepared for Zomtober.  As well as having week two's entries ready for show (see below), I have week three's models almost finished and have even made a start on week four.  So, I'm feeling good about this.  I just hope that everyone else who is taking part in the event is also motivated and enthusiastic. 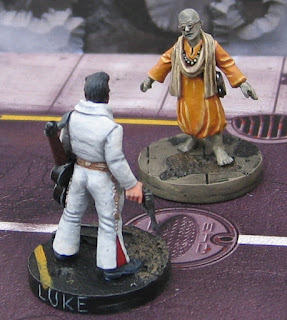 Once again, I'm presenting a recently-finished survivor model facing off against a similarly-recent zombie.  This week, it's the turn of Luke to duel with Hare Krishna Zombie ("HKZ" hereafter, for brevity). 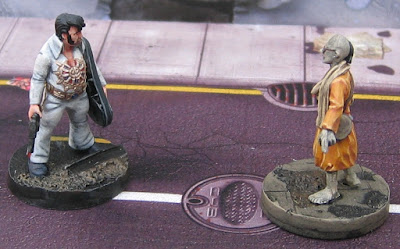 Luke was a kindly, well-meaning man, though even his best friend wouldn't describe him as "wise".  His life was straightforward; he had a regular job that paid the bills, though it wasn't very exciting.  He lived for his weekends when he could indulge his passion for rock and roll, especially from the early years.  His Gibson J200 guitar was a prized possession; Luke could play well for an amateur, though even he would admit that he was nowhere near as good as his idols.

However, now the apocalypse was in full swing and all the old certainties had vanished.  Luke had ventured onto the street to seek company and was immediately faced with a moaning, swaying Hare Krishna - clearly one of the "infected". 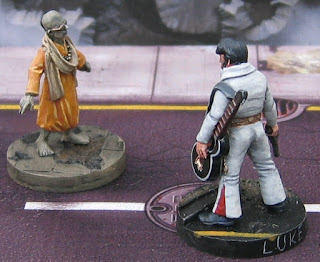 What was Luke to do?  He was armed and technically could shoot the zombie down at any time.  But Luke wasn't sure if this would be right.  After all, this was a holy man - would killing the zombie be a sin that would damn him forever?

Also, by the look of it the Hare Krishna was a fellow musician; he had a tambourine by his side.  Luke wasn't totally sure whether a tambourine counted as a musical instrument, but could he take the chance?  Destroying one of his fellow music lovers would be a terrible thing.  Ah, what to do...? 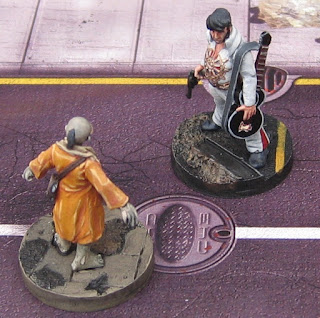 The zombie model is from Studio Miniatures (one of their "character" zombies, if I remember correctly).  Luke comes from Hasslefree, of course.  Bases are green stuff, backed by a 25mm steel washer and then press-moulded on a Basius II pad.

So, what should Luke do?  If he were your everyday, run-of-the-mill street thug then I imagine that he'd raise his revolver and blow the zombie away without a second thought.  But not everyone is like that.

Perhaps there is a cure for the zombie plague and HKZ can be saved?  Perhaps Luke can run away (though he wouldn't want to drop or bash his precious guitar in the process)?  Maybe he will decide that it's OK (and necessary) to shoot the zombie?  Or maybe he'll just stand there dithering and HKZ will rip his throat out?

As always, what are your thoughts on this confrontation?