It's now the third week of Zomtober 2019 and (as always) I'll be presenting a "duel" between a survivor and a zombie.  This time there will be a slight twist, however: I'll give alternate versions of the encounter and let you decide which is more likely! 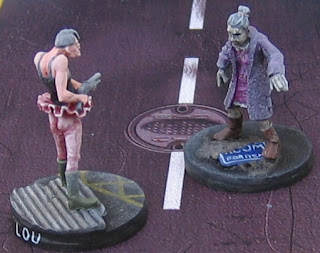 Lou was an exterminator by profession.  His usual work was pest control: trapping, poisoning or shooting rodents, pigeons, seagulls and the like.

His last job had been for the council, at the local community centre.  After disposing of a nasty wasps nest, he had gone to take a shower in the attached fitness centre.  On leaving this, he discovered that some hoodlum had taken all his clothes.  All he could find to wear was his black vest and a discarded costume from a recent children's ballet class. 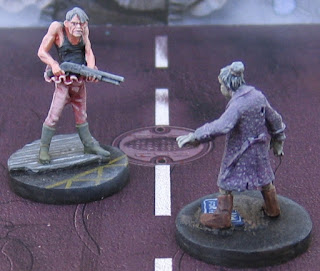 The centre seemed strangely deserted; Lou made his way out to his van without spotting another person.  As he opened the vehicle up, he saw an old woman in a nightdress and gown approaching him, moaning and dribbling.  Was the whole world going crazy?  What else could go wrong today?

Quickly, he retrieved his shotgun from the back of the van and turned to face the crone. 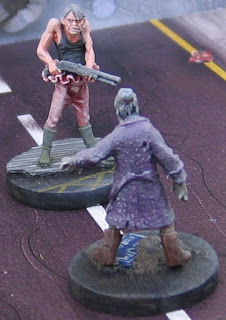 Lou was a bitter, twisted and sadistic little psychopath.  On hearing over the radio that law and order was breaking down, he decided that he was going to get even with his hated landlady, Mrs Doyle. 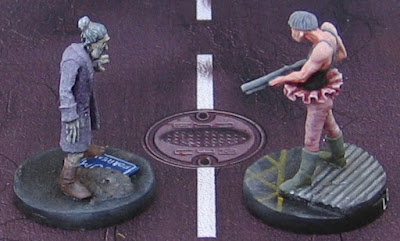 Since there was no-one to tell him what to do any more, he thought he'd dress for the occasion.  He had a pink tutu that he'd been saving for a special occasion after taking it from a little girl years before. 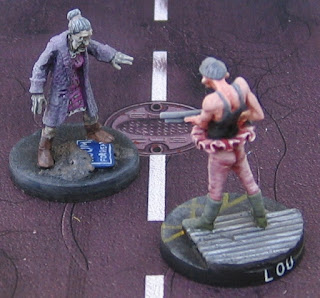 The costume didn't seem as pleasant as he had thought it would; the tights were far too small and the colour seemed to have faded during the years he had kept it under his musty bed.  Still, the decision was made and he wasn't going to go back on it now. 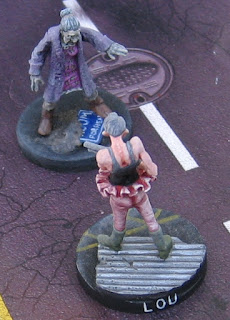 As he stepped into the street, he saw Mrs Doyle approaching.  She looked even more grey and shuffling than usual, but there was no pity in Lou's heart as he prepared himself to shoot her.  This was going to be the highlight of his year...

Well, which is it?  Is Lou an innocent workman caught up in an unlikely sequence of events, or is he just plain nuts?  Will he kill OWZ, or will he hesitate and be eaten by the zombie?  Does anyone even care what happens to him?

The zombie model comes from Studio Miniatures (specifically, she's part of Zombie Mob 2), whilst Lou is from Hasslefree (in the Legends of Golgo range).

I'm quite happy with the painting of OWZ, but there's something about Lou that just isn't right to my eyes.  Both models, as well as much of my other recent output, have a bit of "milkiness" causes by my current varnish.  I'm not at all happy about that and will need to obtain a replacement can as soon as I am able!