I'm full of cold and not feeling very good today, so if there's anything in this post that is rambling or incoherent then it's because I'm very tired and have a bad headache.

So, it's week 4 of Zomtober 2019; the final part of the event (whew!).  As always, I'm going to show a zombie miniature and a survivor, presented as a "duel".  This time there's a slight twist: the survivor comes in two variants and it will be your job to determine which one is more likely.  Read on...

Here we have a young man facing off against a zombie stripper.

On the left is one version of this week's human.  He's well armed with a machete & club and is wearing a facemask and padded jacket which should give at least some protection against zombie bites.  This is clearly how Mick wishes to see himself: capable and in control of the situation.

On the right the other version of our "hero".  He's the same guy, really - but instead of weapons he is waving a bottle of beer.  I suspect that this isn't the first drink he's had recently either.  Perhaps "Mickey" is a more likely representation of this person?


From another angle, it's fairly obvious that the zombie stripper is charging at the human.  Mick looks as if he's prepared to fight, though Mickey seems to be swaying a bit as if drunk.  Or is that just my imagination?


The "Mick" and "Mickey" models are from Offensive Miniatures.  I had thought that all of the figures in their packs were quite unique; it was quite a surprise to find that these two were so similar.  Hower, rather than being put off by that, it gave me the inspiration to paint them as 2 different versions of the same person.

The stripper zombie is from Studio Miniatures, specifically from the "Zombie Characters VI" pack.

Both/all these models were relatively easy to paint.  The stripper zombie in particular is mostly just flesh; there's little in the way of clothing or equipment that needs detailing!

The bases are press moulded in green stuff from a Basius II pad.  For Mick/Mickey, I was careful to try to use exactly the same area of the pad, so as to create the same result.

As an extra, the poster under Mick/Mickey's feet is an advert for some low-budget zombie film, printed on paper and then stuck to the base.  It's just about possible to read the film title when I have the models in front of me, though I don't think any of the photos are clear enough for it to be understood.

Last shot; the detail on Mickeys's bottle can be seen more clearly here. 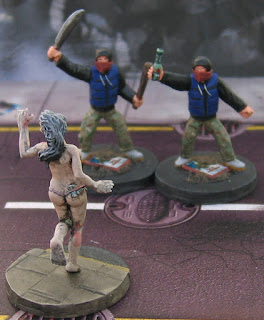 So who will win - the zombie or the human?  I think it hinges very much on who the person is: Mick the survivor or Mickey the civilian?  If he's feeling like "Mick" today then a blow from the machete will fell the zombie.  But if our lad is really "Mickey" then I think he's in big trouble.

As always, your thoughts are much appreciated...