A couple of years ago I showed a mode of a sword dancer that I had prepared for my Dark Age Scots warband.  At the time someone commented that I needed a bagpipe player or other musician as well, to complement the scene.  Well, I have finally built that model!

Models of early or medieval pipers are not very common, which isn't surprising as there is no documentary or archaelogical evidence for them in Scotland before the 16th century!  I did eventually find a suitable model in Antediluvian's "Islemen-Galloglass Command 2" pack.

This model is technically for the later middle ages - maybe 1300 to 1400 - but styles of dress and equipment didn't change that quickly in more far-flung locations such as the Scottish isles.  In the earlier period, bare legs and no shoes seem to be quite a feature of Dark Age celtic peoples, especially the commoners.

The only change I made to bring my model back to 800 or 900 AD was to replace the legs.  I cut off the model's legs-in-hose-and-shoes and replaced them with some bare legs from a plastic Zulu.  As a bonus, my figure is now standing still, rather than marching forwards - that suits my purposes better. 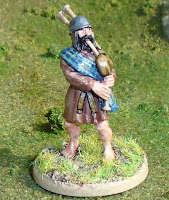 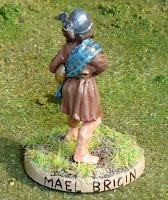 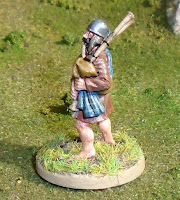 Once this simple conversion had been done, painting the figure was very straightforward.  He has a plain, brown tunic and a patterned cloak, vaguely suggestive of tartan.  The pipes themselves are just a leather bag with some wood or bone tubes. 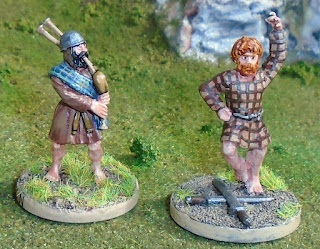 My SAGA Scots now have someone to play music for the sword dancer!  Or he could lead them into battle, I suppose.

Either way, both the pipes and the sword dance are probably anachronistic; neither is documented as being present in the dark ages.  But then again, the origins of both are not entirely clear, so they could have been present at this period.  Please, just allow me my little fancy!