Not so long ago, I showed my Saracen force for SAGA.  In that article, I added a few extra elements suitable for fantasy games (a sorcerer, a djinn and a roc).  However, no Arabian-style medieval fantasy army would be complete without a flying carpet.  At the time, I didn't have such a model - but I do now and here it is! 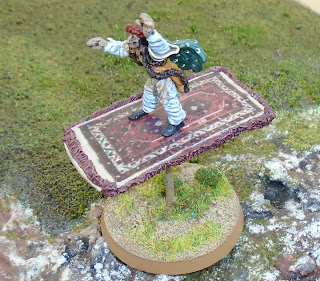 After realising that I had made this grave omission, I looked around for suitable models of a flying carpet.

There are quite a few such miniatures around, but most were not much to my taste.  At one end of the spectrum, many such models are much too highly animated & detailed for me, whilst at the other end are some very "decadent" pieces with lounging slave girls and the like.  They look more like an exotic picnic, rather than an adventure in progress!

In the end I chose a middle-of-the-road model from Midlam Miniatures.  It's a fairly old-school figure, but it works for me. 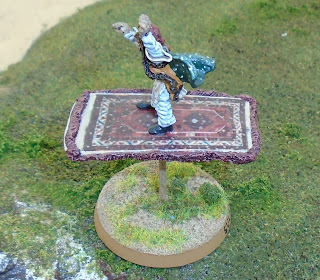 As cast, the carpet did have mounting points for the rider, but I felt this was too far to the back of the "vehicle".  I filled these and drilled new holes towards the centre of gravity.  I also added a sturdy piece of brass rod as a "flying" support, rather than trying to use a transparent plastic post.  The weight of a metal model would have made any plastic into a weak point, I think. 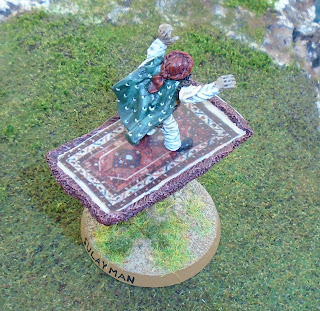 The carpet itself is an image found on the internet..  I did distort it a little bit to fit the shape of the metal model, but my skills in this area are fairly rudimentary.

Once I was reasonably happy with the shape of the image, I printed it onto paper, trimmed it and glued it to the metal model.  Fortunately the metal has only a few gentle undulations in it (no complex curves or folds!) and it wasn't hard to ensure that the paper followed these contours. 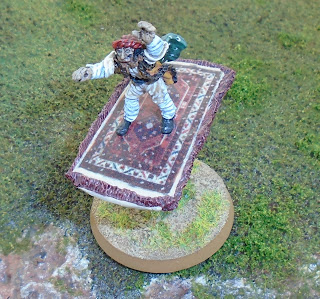 Once the paper insert was dry, I painted the fringes of the carpet in a complimentary colour.  The figure was also straightforward to paint; he's a fairly regular 28mm man.  Mind you, I did have a little difficulty in figuring out his clothing; he wears a lot of different layers; some are trimmed with fur and others are not.

I'm happy with this model.  It's a little crude in detail, but paints up nicely into a very colourful and exotic piece.  And of course there's nothing to stop me from adding further flying carpets to my collection in the future, should I choose!