It's been a strange year (and a bit).  We've not been able to go out much because of the various lock downs and so haven't really played any games.  However, this has left a lot of time for painting.

I've been powering through a number of projects and individual figures, but I just realised that many of my recent completions are models for Frostgrave.  It makes sense to document them all together, so here we go.

Last of the old GW Wizards 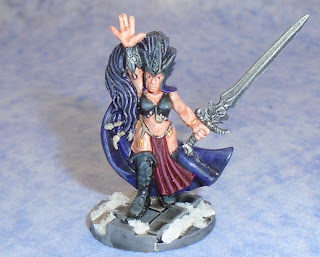 When I started looking for miniatures with which to play Frostgrave (back in 2015!), I remembered that I had a decade-old collection of Games Workshop plastic wizards.  I re-based and finished painting seven of them (here: http://colgar6.blogspot.com/2015/11/frostgrave-wizards.html), but at the time I couldn't find the 8th model in the set - the Dark Elf sorceress.

Well, she finally came to light and so I've re-based this model for the frozen city.  Considering how long ago I actually painted this figure, I think it's help up well.  Mind you, I can't help thinking that her choice of clothing is not optimal for an icy wasteland.  Maybe the cold never bothered her anyway? 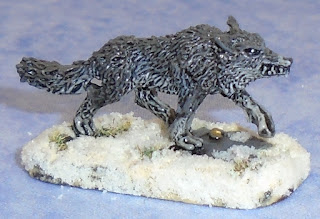 This is another old (ancient!) Games Workshop model.  It's one of the figures I prepared for Frostgrave some 5 or 6 years ago, but the snow effect on its base had aged very badly.  Oddly, most of the models I have prepared at that time or since are just fine, but this and maybe one other were yellowing visibly.

I painted over the discoloured parts of the base with white, then used a mixture of white paint and glue to stick down some "realistic" model snow (instead of the bicarbonate of soda I had used previously).  Because of the over-coverage to hide all trace of the yellowing, this is now the snowiest base in my collection!

For some time, I have been searching for medium constructs for Frostgrave.  There are plenty of large models of mechanical men, golems and the like and I have a selection of these from various manufactures already (see here and here).  However, I wanted some man-sized items as well.

I was delighted when I came across this set of "Magical Automata" from Midlam Miniatures.  These figures are available individually and I don't really need four, but I just love them!

Painting the grain in the wood was not much fun, but I think it has worked better than I had hoped.  Mind you, the models have no texture on these "wooden" parts and so they could be painted differently (as iron, ceramic or anything else you can imagine).

As part of a recent "NickStarter" campaign from North Star, I received a bonus sprue of official Frostgrave cultists.  It seemed appropriate to build them (note that I've only made 4 of the 5 models on the sprue), though there's nothing particularly different or unique to distinguish them from anybody else's cultists.

I've finished the cultists with a brown theme.  This helps to identify them as a coherent group and also separates them from my other Frostgrave figures, none of whom are predominantly brown. 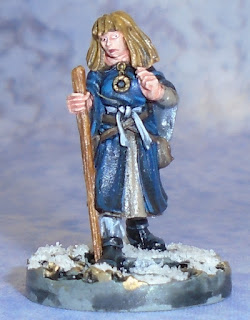 Here's another North Star "freebie", recently finished.  She's a somewhat generic wizard or apprentice, though I imagine that the figure could also be used as a thief, healer or pretty much anything else that isn't combat-oriented.

Mind you, now that I look at the model again I remember I had intended to paint the robe with classic wizard's stars and moons to identify her as a wizard - but I forgot.  Hmm, is the figure truly finished?  Should I go back and add the intended detail?  I'm not sure.

Another part of the recent "NickStarter" was a sprue of Gnolls (hyena men).  Again, these seemed useful for Frostgrave and so I've completed all five figures.  This time they're painted in a dark grey or black theme, though there are splashes of other colours from their mismatched assortment of clothing and equipment.  Gnolls should be very useful as wandering monsters, or even as hirelings for the less scrupulous wizards.

That's all for now!  I think this pretty much cleans out my stash of unpainted models for Frostgrave, though no doubt I'll find a few more if I look properly through my storage.  And there's always the possibility that I might buy further models in the future...