The incident at Station X 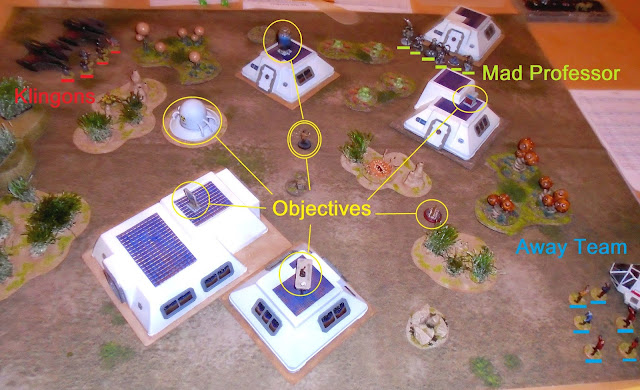 On a barely-charted jungle planet, remote from normal shipping lanes, the Federation have permitted the establishment of a private research station.  Ostensibly this group of scientists, led by the fiercely intelligent Professor Frinkle, are there to develop new medicines and cures.

A garbled message from the base is received by the USS Matakishi - a Federation starship commanded by the inspiring Captain Bellamy.  It reads:

The ship's comms officer has determined that the transmission is being jammed.  By looking at a list of base personnel, it is thought to have been sent by Doctor Smith, the research centre's second-in-command.  Bellamy decides to investigate immediately and leads a small away team to the planet's surface.

However, he's not the only one to show an interest.  The Klingon vessel P'Rang has also intercepted the message and her captain Mor'tah has ordered that "Federation combat drugs" research is in violation of some treaty or other and must be seized, for the safety of the Empire.

This was a 3-player game of Pulp Alley, using my newly-completed Alien Jungle and my slightly older Salad Box Science Base.  The terrain was set up as follows:

6 minor objectives were set up in buildings and around the base:
The major objective was Doctor Smith, who was in the open at the very centre of the research base. 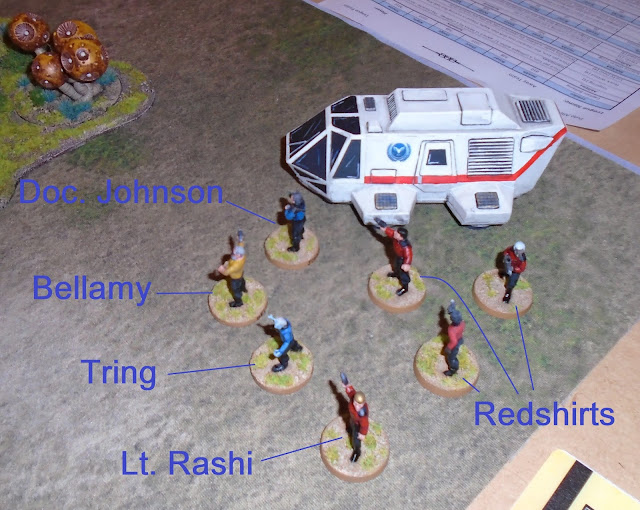 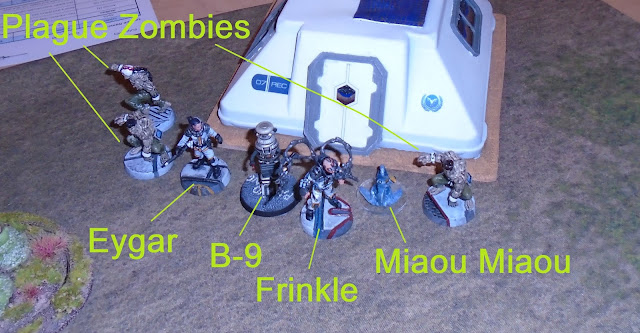 The mad professor is determined to preserve the autonomy of his research from outside interference of any sort.  To that end, he has the following resources: 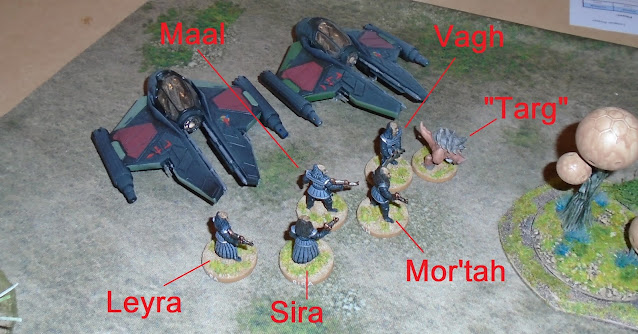 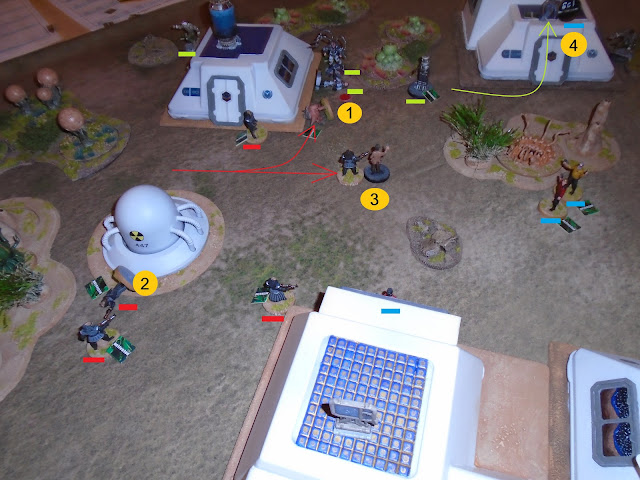 Unsurprisingly, given the setup, the first turn was spent with most characters heading for the inevitable "scrum in the middle".  Turn 2 started to become interesting: 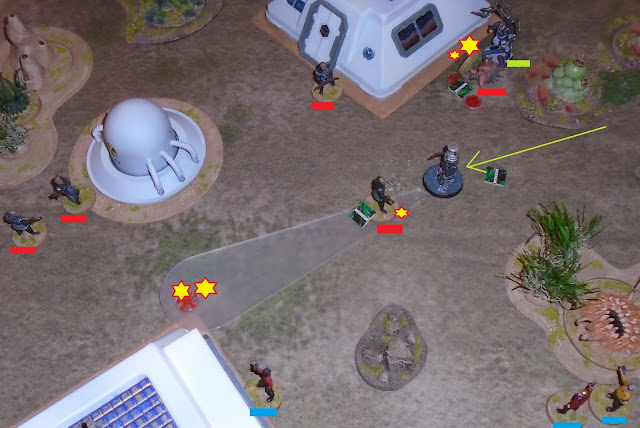 The pig-beast charged into the nearest thing is could see, but Professor Frinkle was a tougher customer than his lab assistant.  He swatted the creature down with ease.

Meanwhile, B-9 rumbled forwards and then unleashed a deadly electro-bolt.  The ray narrowly missed Mor'tah, but completely fried the hapless Leyra. 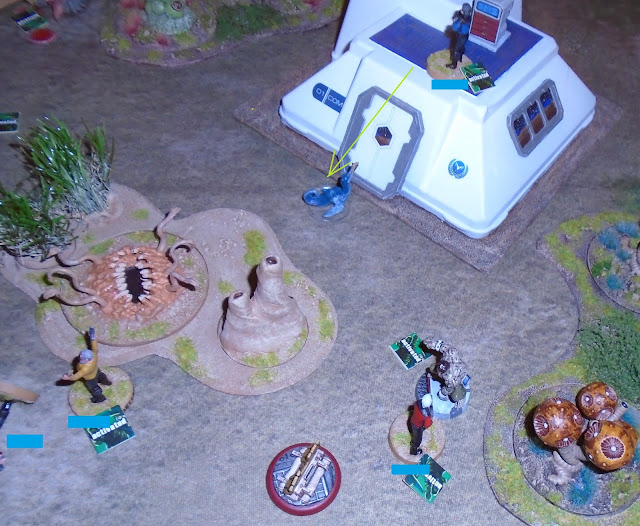 Over in the Admin block, Doctor Johnson and Miaou Miaou both regained their senses at about the same time.  There was a brief scuffle which resulted in the strange alien pet bolting through the door, leaving the doctor alone in front of the filing cabinet.  However, despite several attempts the increasingly-frustrated doctor just couldn't figure out how to break into the locked cabinet.

As another moment of comic relief (perhaps?), one of the plague zombies chased a redshirt across the board in slow motion.  Neither had much chance of hurting the other, though the redshirt kept dodging backwards so as to use his phaser and the zombie repeatedly stumbled forwards to close the distance. 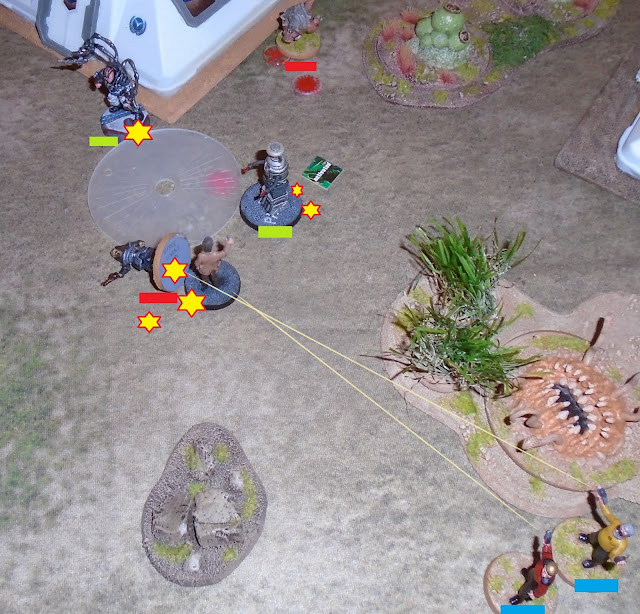 Then the robot lurched forwards.  It suffered some form of malfunction and splattered corrosive fluids all over itself, Professor Frinkle and Mor'tah, as well as making that area perilous for the remainder of the game (this was a fortune card, though I forget exactly which one).  The robot and the professor were unharmed, but the Klingon captain caught a face full of the poisonous goo.

What with the noxious chemicals and phaser fire from Lt. Rashi & Captain Bellamy, Mor'tah sank to his knees and then collapsed, releasing his grip on Doctor Smith. 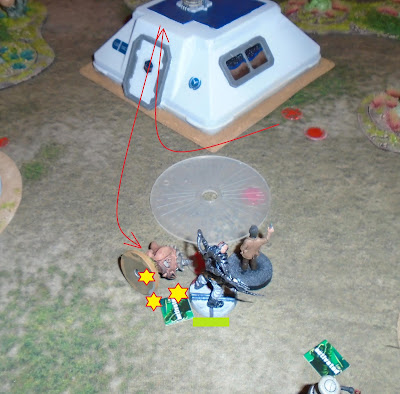 With a detour into the Science building to look at the cloning tank, the Klingon pig-beast squealed its challenge and charged at Professor Frinkle.  It may have been intent on revenge for its fallen master, but once again the hopped-up professor smacked it down into the dirt.  This time the creature didn't stand up again. 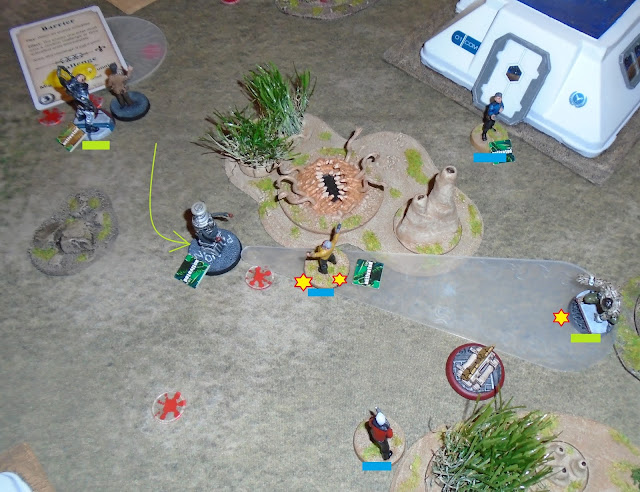 B-9 now turned its attention on Captain Bellamy and Lt. Rashi.  It shot down the lieutenant before unleashing its electro bolt on the Federation captain.  Luckily, the captain survived, as did a nearby plague zombie which happened to be in the line of fire.  Honestly, I think at this point that the player of the Mad Science league was so annoyed with the plague zombies' hopeless performance that he was even trying to kill them himself.  Ah, well - what else would you do with a failed experiment except turn them back into spare parts? 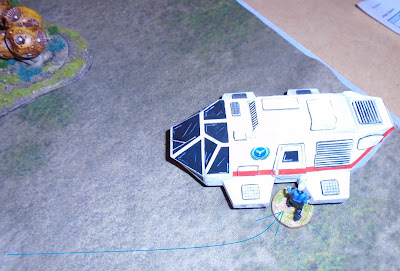 In the last turn of the game, the Federation started to retreat.  Science officer Tring had managed to solve a minor plot point (the microscope in the Geology building), though not without a considerable amount of difficulty.  I think it took him 2 or 3 turns.

He now retreated to the relative safety of the away team's shuttle, having discovered several interesting facts about the microbiology of the planet's soil and the curious organisms which coexisted below the surface.

At the same time, Doctor Johnson gave up trying to open the records cabinet ("Dammit, Captain!  I'm a doctor, not a filing clerk!"); he also moved towards safety.

Even though Professor Frinkel held the centre ground, he had been totally unable to solve the major plot point.  I suspect that by this time Doctor Johnson had lost all means of cooperating with any of the leagues.  Indeed, I imagine he was quite dead, having been phasered, covered in corrosive robot fluids and then zapped with an electro bolt.

Likewise, Maal had spent several turns trying to understand the computer terminal in the Command centre.  Despite his advanced abilities, he just couldn't gain anything useful from it and failed to solve the plot point.

So, the final scores were these:

In the end, the Federation won the game, even though they only held a single, minor plot point.  This wasn't for lack of trying by all three leagues, though.  I cannot remember another game of Pulp Alley where the plot points proved so perilous and the challenges were so hard!

Man/machine/animal of the match: runners up are the pig-beast (which just kept getting back up and charging the next opponent) and Professor Frinkle (who shrugged off every hit he took from every source.  Maybe his combat drugs do work after a fashion?).  The winner, however, has to be B-9.  The large, armoured robot trundled around the centre of the table and scared the cr*p out of everything nearby.

Most useless: I think Sira was a bit of a waste of space.  This Klingon science officer failed to understand the base's power supply and indeed kept getting zapped whenever she prodded it.  Eventually this was too much and she was knocked out of action, without having contributed anything at all.