It's Tuesday, so it was a Games Club night in Helensburgh.  Some of us played Full Thrust and here's what happened...

The Ferengi are normally a peaceful race, who love nothing better than to trade with and exploit mercilessly the less advanced races that they encounter in the galaxy.  However, when a squadron of Orion pirates started to terrorise the indigenous race of Beta-Cygni, the Ferengi had to act.  After all, how can one make a profit if your customers have all been carried off as slaves?
A Ferengi task force was dispatched to hunt the raiders.  They finally tracked them down close to the black hole V404 Cygni*, only to discover that the Orion raider squadron had joined up with another group of pirates.  Fight on!

The Ferengi task force consisted of (from left to right): the destroyer Bractor, the heavy cruiser Krayton, the battleship Hoex, the frigate Qoltog and the light cruiser Letek.  Note that these Ferengi ships are somewhat more massive than equivalent classes in other navies; the difference is attributable to the cargo space.  All Ferengi warships have large holds, just in case the captain needs to do some trading whilst on patrol... 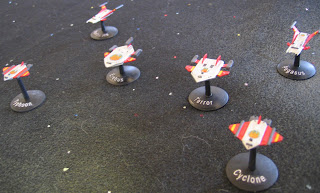 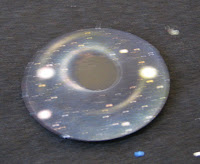 Finally, the black hole would pull in anything that got too close, although it wasn't all that powerful unless a ship went really close.

The Ferengi fleet advanced steadily, but the Orions split into 2 groups.  The 1st raiding squadron moved forward, cautiously turning slightly away from the black hole.  However, the 2nd squadron slowed down and allowed their compatriots to pull ahead and thus take the brunt of the Ferengi assault.  Was this some politically rivalry between the pirate leaders, or just a misunderstanding? 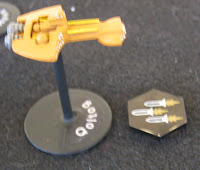 A long-range, badly-aimed missile salvo from the Orion 1st squadron's flagship (the Terror) missed the larger Ferengi ships, but locked on to the small frigate Qoltog.  The frigate appeared doomed, yet somehow only 2 missiles made final approach and these were both shot down in a bravura piece of dice throwing.  This annoyed the 1st raider squadron so much that they then concentrated all fire on Qoltog as the fleet closed.  At medium range, this was too much for the little ship, which exploded violently. 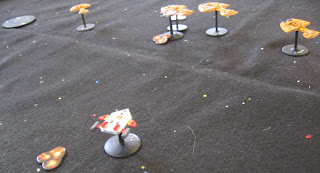 The 1st raider squadron had become quite widely separated from each other by a combination of minor battle damage to engines and the pull of the black hole (some ships were closer and therefore more affected).  As they approached, the Ferengi fleet swung into a line and presented broadsides to them.  There was no longer any doubt: the 2nd raider squadron had come to a dead stop and clearly didn't want to engage until the other ships had blown bits off each other.
The contest between the 1st raider squadron and the entire Ferengi fleet was fairly one-sided.  Firstly the Cyclone, with engine damage, was unable to slow down and charged through the other fleet.  Although she took a hammering on approach, she survived and fled out the other side.  Then the Pegasus took a warp core critical hit and promptly exploded.  This left the Terror, which also took a beating, but somehow survived and passed through the Ferengi gun line.

The Ferengi fleet continued to advance, turning sharply towards the stationary 2nd Orion squadron.  However, not everything was to go their way!  Erebus got off a massive phaser volley which gutted the opposing heavy cruiser Krayton.  Everyone held their breath as the Ferengi battleship Hoex returned fire - and missed with practically everything! 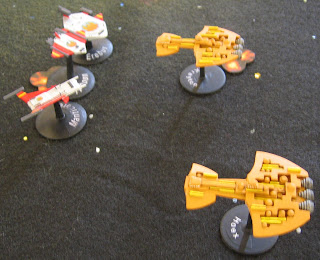 As the Ferengi closed to point blank range, the Orions switched their targeting to the Hoex.  They managed to inflict some damage to it.  In particular, 3 of the 4 cargo holds were destroyed; this really upset the Ferengi admiral as he had high hopes for profit from his cargoes of antique books, lawnmowers and recreational robots!  The Ferengi return fire was again split between the various Orion ships and at this range it was only the Orion ships' heavy shielding that saved them from total destruction.  Even so, the destroyer Typhoon was heavily damaged, losing her captain along with the bridge.  The Manticore suffered a warp core breach just like her sister Pegasus from the 1st squadron, but the crew managed to bring it under control.  Perhaps there is a fatal flaw in the engine design of this class of light cruisers?  Even the Erebus suffered damage, though she remained at full fighting capacity.

At this point, we ran out of time.  If we had continued, the Ferengi fleet would have sailed past the Orion 2nd squadron who, being stationary, would have found it difficult to continue the engagement effectively.  The status of the fleets at this point was:
Ferengi:
Orion 1st squadron:

Although both Orion leaders were making threatening noises, it's hard to see how their scattered, disunited and badly damaged fleet could have fought on.  On the other hand, the Ferengi had lost some of their most important assets: their cargoes.  There wasn't even any realistic prospect of salvaging wrecks to compensate.  There is no profit in this!
We did use the non-critical hits rules, but this wasn't as satisfactory as it has been in past games.  Oddly, 2 ships each lost their captain's disco lounge - but one ship immediately blew up anyway and the other lost the command bridge (and presumably lost the captain as well).  Either way, the loss of the disco lounge was of little significance.
Posted by Colgar6 at 07:07