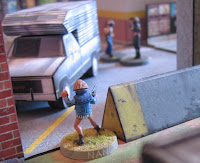 The reason that Nancy hadn't noticed as everyone else ran past her was this: she'd just seen a news team coming through the car park.  She and Goofy led a very private life together and she wasn't sure that she wanted to appear on camera.  What could she do to prevent it?

The decision was swiftly taken from her.  Just as the camera panned in her direction, the zombies that were chasing the men of the party came round the building. 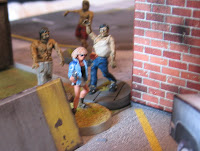 Attacked from behind, the small woman never stood a chance.  The cameraman gaped with horror, but kept filming as the zombies tore her down and then disappeared behind the concrete barrier to eat the remains!

Not far away, John, Goofy and the rest of the men faced the 2 police officers across a side road.  There was some hesitation: both sides saw that the other had guns drawn and no-one wanted to make the first move.  Again, events moved on without them.  Just as John was about to call out a friendly greeting, a large pack of zombies came shuffling round the corner of the burger bar. 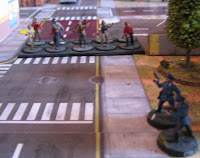 Everyone froze as they tried to re-orientate themselves to this new threat (bad activation rolls!).  The horde drew closer and closer...

Officer Callahan reacted first.  He turned and fled as the zombies charged, leaving his partner in the lurch!  Officer Columbo managed to knock one zombie down with a snap shot before he disappeared beneath a mass of bodies. 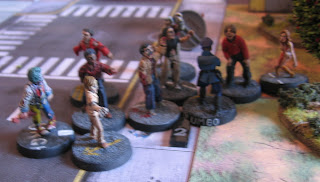 The party stood appalled; their hopes dashed.  It seemed that the best they could do now would be to creep past whilst the zombies were occupied with the policeman's body.  But as they watched, they realised that the fight wasn't over. 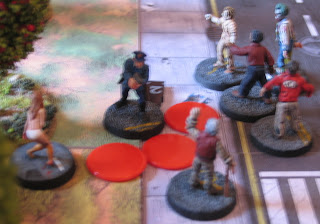 Officer Columbo beat down the first rank of the undead with his baton and then braced his pistol.  He was as calm as if on a firing range as he gunned down one zombie after another with fast but carefully-placed shots.

By the time that Salty, Goofy and Bomber regained their wits and rushed forward to lend a hand, there were almost no zombies left standing.  Even as they finished off the remnants, the cop had rushed off to kill a zombie straggler coming round the back of the police station. 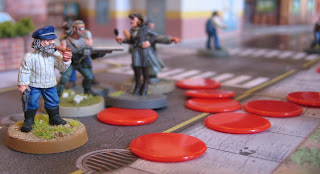 The news team caught up with the guys as they stood and stared at the carnage.  "How did this happen?" asked the lady reporter.  "Did you do this?"
"Well, not really" replied Bomber.  He wished to make a good impression, so he surreptitiously wiped his bloody baseball bat on the edge of his coat.  "It was mostly that officer over there.  We assisted, but he's a real hero!"
"And you, sir" she continued, turning to Goofy.  "Could you tell us what you saw?"
"No comment!" was the surly reply.

As Columbo returned, Bomber and Captain Salty begged him to come with them to help protect the retirement village.  The reporter asked him for "a few words for our viewers".  Both requests were met with the same curt response of "Go home, citizens!  It's dangerous here and I cannot protect you all.  Go home!".  The cop then noticed the zombies that were now approaching after having finished feeding off Nancy's corpse.  Without a further word, he dashed off to slaughter them too!

The party quickly decided to go the other way.  They planned to enter the police station in case there was anyone else who could assist them.  Indeed, John was muttering something about "...going to report that guy!" as he led the way.  The others were delayed a little by the need to kill the odd lone zombie.

After having filmed the scene and done a brilliant piece to camera which just happened to include officer Columbo dispatching yet another zombie, the news team decided it was time to leave.  There would be quite a lot for them to put on the evening news, assuming that not everywhere was blacked out and unable to receive their report!

As Captain Salty and John walked through the doors of the police station, Salty casually announced "Ah, I'm down to my last bullet".  Goofy was just behind them, but hadn't quite made it through the door.  As John glanced at Salty with exasperation, 3 zombie cops rose up from behind the desk and charged! 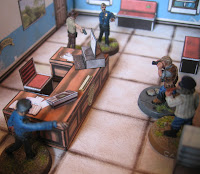 John and Salty both fired snap shots and each managed to knock down one of their attackers.  The remaining one shambled towards John, who swung his camera case at the zombie and flattened it.  "Thank goodness for all those spare batteries", he said.  "I never thought I'd be glad of all that weight!".  The other 2 zombies lay on the ground moaning as John and Salty walked up and hit them repeatedly until they stopped moving.

"I heard noises from behind that door" claimed John.  He and Goofy opened it carefully and looked through. 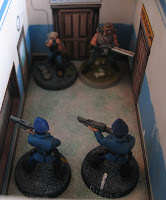 Officers Webb and Dibble stood in the corridor, each looking thoroughly frightened.  "Hey!  You shouldn't be in here.  This is a restricted area!" shouted Webb.
"We need some help" replied John.  "Please, we need your help!"
But it was no use.  The officers were too traumatised to listen and could only repeat "Get out!  This is a restricted area!".

Reluctantly, the team gave up trying to convince the cops and left them to their fate.  But John wasn't going to give up that easily.  "There must be someone here who will listen to us" he claimed.  They tried the locker room 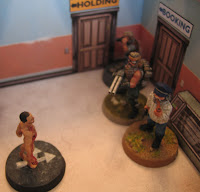 ...but all they found in there was a full frontal, nude zombie (the horror!).  This was easily dispatched.

At this point, the strain began to tell.  "There's no-one here" said Goofy.  "We should go."
"No!" shouted John.  "There must be someone!  I haven't come all this way to give up now!"
"Give it up!" replied Goofy.  "They're all gone.  Or worse."  He turned and left, just as Bomber came into the lobby.
"What's eating him?  Ah, no pun intended, sorry."
"Come on" said John in desperation.  "We haven't looked upstairs yet." 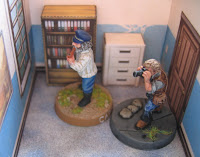 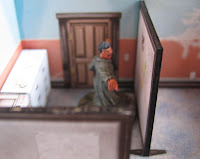 But there was no-one upstairs either.  John and Salty searched the chief's office; there was a box of donuts on the table (still fresh), but no people.  Bomber looked in the squad room; the place was a mess and looked as if a hurricane had hit it.  Still, there was nothing moving in it.  "I'm having this!" Bomber said quietly to himself when he saw a pump-action shotgun sticking out from beneath some files. 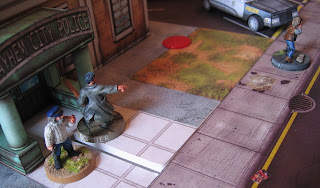 As they left the building, the trio ran to catch up with Goofy.  He was some way down the street by this time, with Terry following him.

Salty and John ran along the road, catching up with Goofy just as he entered the burger bar.  Bomber struggled to keep up, having exhausted himself earlier with his bat-wielding exertions.  Terry just looked confused; he didn't really know any of these people and couldn't understand what was going on between them.

There was a brief fight inside the burger bar, as yet more zombies appeared.  "Dammit!" exclaimed Goofy, as he finished off one of the zeds.  "I just wanted a quiet place to sit down for a few moments, but these...things; they're everywhere!"

As they stood in the doorway, John and Salty considered what they might say to him, but before either could open their mouths, another pair of zombies approached from behind, having come round the blind side of the building.  John was first to react; he whipped round like lightning and fired a couple of hasty shots.  He was extremely lucky; both the attackers were killed instantly.

Terry and Bomber joined the sombre party inside.  "Hey" said Goofy as he gazed at the undead corpses at his feet.  "This one has an iPhone.  I always wanted one of them!"  He pocketed the device.  Bomber bit back a remark about there not being any way to charge it.  Terry came from behind the counter, where he had been rummaging about.  "Look what I found!" he exclaimed.  "Do you think this will be useful?"  He was holding an unopened carton of burger buns.

"Let's go home" said John.  "There's nothing more we can do here".  The team trooped out of the restaurant, not noticing that one of the zombies they had killed inside was beginning to stir.  As they walked away, it rose to its feet again and lurched towards the door - which had swung shut by this time.  The reanimated zombie scrabbled at the glass, but it couldn't work out how to leave the building. 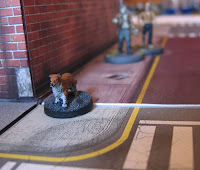 Across the road, a small dog came running towards the party.  It looked exhausted, which was probably not surprising as it was being pursued by another 2 of the living dead.  John called out "Hey, over here!".  As the zombies looked in his direction, he set off a camera flash that left them (and the dog!) reeling and blinded.  "Salty, grab the animal!" he commanded, as the party ran past the temporarily incapacitated zombies.  Goofy paused briefly when adjacent to one of the monsters and called "I'm SICK of you!"  He then fired his shotgun into it, blowing it to pieces. 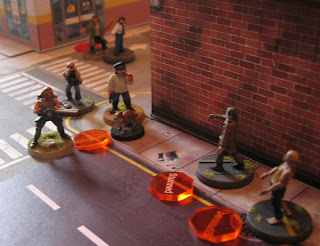 Following this, the men fled back to the comparative safety of "Golden Hills" without any further incidents.

"Ah, you're back!" said Gertrude as the weary adventurers came through the front door.  "How did it go?"
"Not so good", replied John.  "There's no help to be had from the authorities - they're all under siege as well.  By the way, this is Terry."
"Pleased to meet you, Terry" she said.  "Is Nancy with you?"
Goofy grunted.  "We got separated."
"Ah well, I'm sure she'll be back soon.  Now, I've got some good news for you boys: the power came back on just after you left!  I'll just go and make us all a cup of tea and then we can sit down and watch the news on the telly.  That'll be nice, won't it?"