HOTT: The defence of the Tower Perilous

For some time now, I've had it in mind to play a triple-sized game of Hordes of the Things (HotT) at the Helensburgh Games Club.  Yesterday evening it all came together: I finally had enough bases for 72AP from each of my 2 largest ex-Warhammer armies and there were enough players for 3 on each side.  Game on!

The Knights of Lyonesse own a small fortress (the "Tower Perilous") close to the Black Mountains.  This is used to hold political exiles, recalcitrant princesses or spare Holy Grails; whatever might be needed at the time.  Normally the tower would be safe enough against attack, but recently the Black Mountain Goblins have united their normally fractious tribes into a large and dangerous alliance.  The Knights have assembled a glittering array of the finest warriors in the kingdom to deal with the new menace. 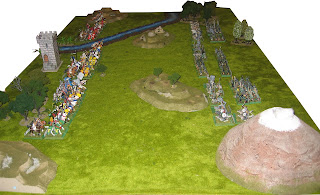 The Knights are to the left of the picture above.  From the front:
The goblins are to the right.  Presumably they have names, but these are not pronounceable in any human tongue.  They have a fair number of trolls (Behemoths), wolves (Riders and Beasts), a few larger goblins (Warband) and countless hordes.  Oh, also they have a crude bolt-thrower (Artillery) somewhere in the centre.

The Charge of the Heavy Brigade 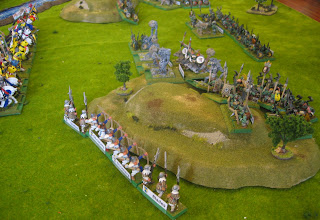 Straight away, the massed band of trolls in the goblin's centre-left charged forward as fast as they could.  At the same time, the goblin left wing and the infantry from the knight's right wing both advanced to contest the hill in the foreground. 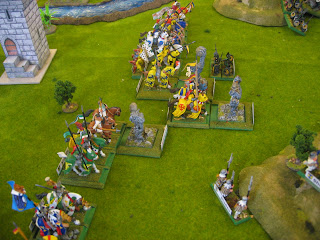 The trolls met the advancing knights with a resounding crash.  Although they killed some knights, the rest fought back with vigour - possibly their nerve was strengthened by the presence of Saint Florence!  Inevitably, the two lines broke up into a swirling, confused melee.

While the attention of the goblin chieftains was on the big fight in the centre, the right wing infantry managed to climb to the summit of the near hill.  The odds against them looked formidable, but if they could advance a little further then they would be fighting downhill and this would give them quite an advantage. 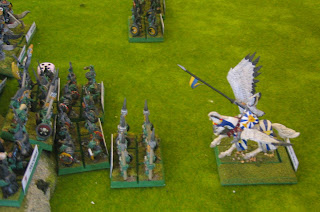 To distract the goblins, Sir Alain spurred his winged horse across the battlefield, over the heads of the masses and landed behind the hill.  He immediately charged a group of goblins who had become separated from the mass.

Goblins on the Move 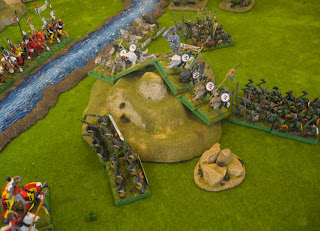 The far wing of the goblin army started to curve in towards the centre, threatening Sir Roger and even Lord Vesper himself!  Meanwhile, despite pleas for them to advance, the forces of Le Seigneur de Gauches stood impassively behind the river. 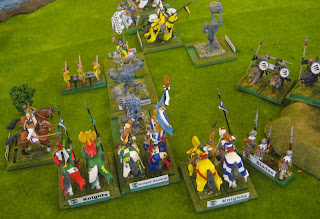 In the middle, the trolls caused mayhem - even Saint Florence herself was nearly killed, let alone the lesser knights.  Finally, however, forces from the knights' right and centre commands managed to surround some of the monsters and kill one. 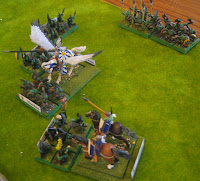 Sir Alain was in trouble.  Astonishingly, his first attack had failed to rout the goblin horde (tied combat result!).  Immediately, more and more hordes engaged him, denying his mount the opportunity to take to the skies again.  Even when he did kill any of them, further hordes just kept pouring into the fight.  A fast unit of riders was sent to help, but they were blocked and unable to join him.

Death of a Hero 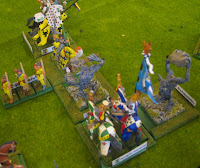 Even as Saint Florence killed the second of the trolls, the third one threw a huge rock at Sir Vergain (the right wing's general).  The boulder knocked the knight from the saddle, whereupon the disgusting creature stomped on him. 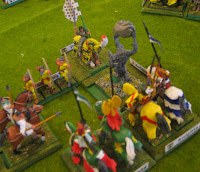 Retaliation was swift, as Saint Florence led the attack on the surrounded behemoth.  It didn't really stand much of a chance against the mass of enraged chivalry. 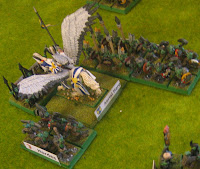 Sir Alain fought valiantly, but there were just too many enemies.  Eventually he fell, mortally injured.  Both the hero and his mount disappeared beneath a wave of shrieking goblins. 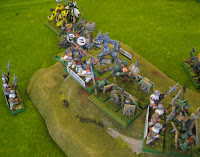 The foot soldiers who had been valiantly contesting the top of the near hill saw their hero fall and vanish.  This was the final straw; their general was dead along with some of his knights and now their last hope was gone.  Demoralised, the knight army's right wing started to disintegrate and flee. 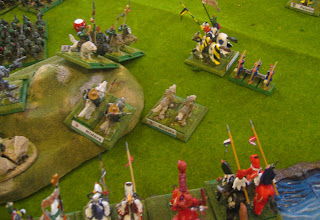 Back on the far end of the field, the goblin right wing was putting pressure on the knights' centre.  Sir Roger the Castellan had fallen, but the attackers had become dangerously split up and disorganised by the fighting.  At this moment, Le Seigneur de Gauches (the left-wing general) chose to act.  So far, his entire force had stood still throughout the battle.  He now ordered them to advance across the river, intending to take advantage of the goblin's disarray. 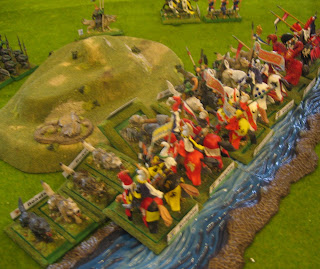 With a whoop of joy, every goblin within sight turned as one and charged down the hill, catching the knights as they scrambled to climb the riverbank (if ever there was a good time to throw a '6' for PiPs, this was it!). 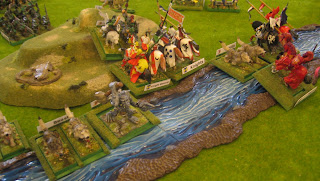 Many of the knights fell before the fierce assault, unable to rise from the cold waters, though a few were made of sterner stuff and fought back.  de Gauches and some of his companions made their way onto dry land, only to face the (left-wing) goblin chieftain himself!  Isolated and at a tactical disadvantage, the Seigneur de Gauches fell to his opponent and the knights' left wing was suddenly leaderless and in disarray!  Although the Red Knight attempted to stem the flood, the goblins swarmed across the river. 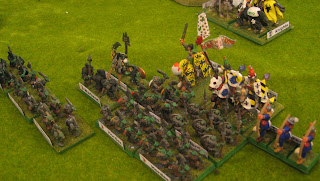 In desperation, Lord Vesper and Saint Florence charged into the middle of the opposing army with only a few scattered troops to support them.  They killed a fair number of the horde, but not enough.  As night fell, they were still fighting, but more and more goblins were closing in...