One of the nice things about Two Hour Wargames is that the same basic mechanisms are used throughout their range of rule sets.  This means that I can mix together a bunch of my more obscure miniatures and make a game from them - provided I can come up with a plausible story.  Here is the report of a game that uses the Lost Lands rules with my attributes for animals extensions.  We introduced some characters from 5150 (the older sci-fi rules from THW, no longer available).  Actually, it's really 3 short games, using the same board... 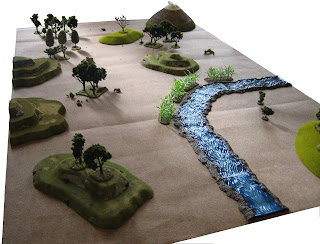 The Klingon warship P'Rang has some spare time at the end of a mission.  Since she is in a remote part of the sector, the captain has decided to land on a nearby planet and take some of the bridge crew on a hunting trip.  The planet Prehistorica is reported to be covered in primitive trees and populated by various mammalian megafauna; the latter should be good tests of the skills of a warrior!

To add to the atmosphere, I handed a sheet of useful Klingon phrases to each player.  I then informed them that they weren't to speak in English for the duration of the game.  This drew reactions ranging from bewilderment to horror, before they realised that I was kidding.  Still, a few words did get used at semi-appropriate moments.
Sadly, no-one found occasion to try "Happy Birthday", "Open the door" or "Where is the bathroom?" in Klingon.

So, who's in the hunting party? 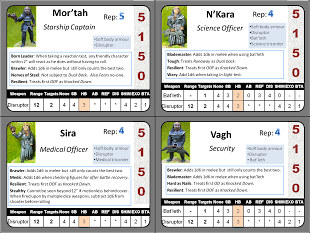 As you can see if you examine the cards closely, these are a really tough bunch.  They are heavily armed and each has a load of attributes to beef them up; truly we're looking at the pick of the Empire here!  I'd be surprised if the local wildlife even got close to them... 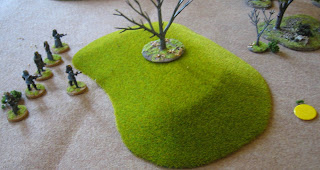 The Klingons entered the table from the far end.  Almost immediately, Captain Mor'tah motioned to the rest to be quiet.  "I think I hear something, just on the other side of this hill" he whispered. 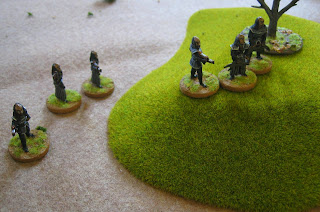 Maal, Vagh and N'Kara climbed the hill to see, whilst the others crept round the side.  "There's nothing here, Captain!" they called back.  "I don't know what you heard, but it's not here!"
Mor'tah grunted in annoyance. 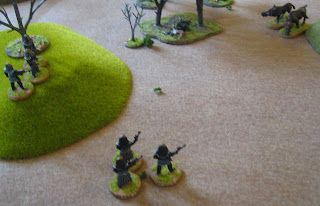 However, whilst the party contemplated their next move, a pair of strange-looking beasts came walking into sight around the corner of the next hill.  "Ah, I was right!  Are those targ?" muttered Mor'tah.
"Not quite accurate, captain" called N'Kara as she scanned them with her tricorder.  "These are related to targ, perhaps, but they seem to have bumps instead of proper spikes on their heads."
"Close enough for me.  Heart of targ for dinner tonight!" he responded.  "Fire at will!"

In the ensuing hail of disruptor bolts, both animals were hit, but neither was crippled.  One was bowled over, but quickly regained its feet.  The creatures then turned and fled, squealing loudly with pain and shock.  Some of the hunters ran after them briefly, but soon gave up when it became obvious that they had no hope of getting close enough to shoot again. 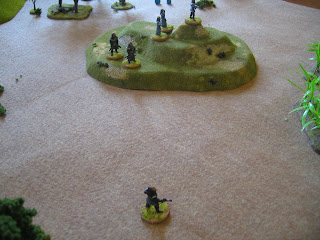 "That was poor!" exclaimed Mor'tah.  "I think some of you might need some extra time on the practice range."  He paused for a moment in thought, then continued "Right, here's what we'll do.  You all climb that hillock and I'll carry on and see if I can flush something out."

There was indeed something close by.  In the vegetation at the edge of the river lurked a monster! 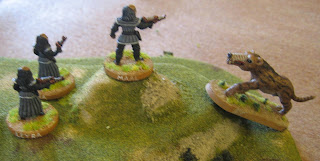 Perhaps the captain's movements had disturbed it, or maybe it had scented blood.  Either way, the creature suddenly charged out of cover, straight towards the hunters.  "Where is it?" called Leyra, urgently.  "I can't see it".
"That way, somewhere!" Sira replied.  "Coming up the other side, I think".
Only Maal, the junior lieutenant, could see the beast.  As it slowed slightly on the steep hillside, he leveled his disruptor carbine and put 2 shots into it.  It dropped immediately, obviously dead. 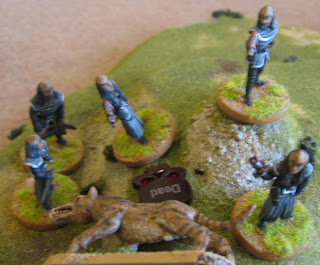 "majQa'!" ["well done!"] exclaimed Vagh, the security chief.  He turned to N'Kara and asked "Science, what is it?"
"I have no idea!" she answered.  "A predator, obviously, but not like anything in my records.  I doubt the meat would be good to eat, though."
"Sir, I'd like to have the head preserved and sent to decorate my family's dwelling" requested the successful hunter.
"Certainly.  Your family must learn of this exploit and be proud of you!" his commander answered.  He activated his communicator.  "Transporter room!  Beam us directly to cargo hold 2!  Now!"
As the party started to phase out, the captain added "...and the drinks are on you tonight, Maal!"