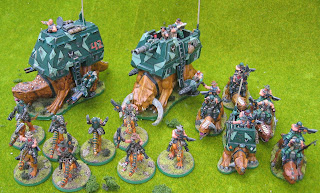 These 28mm models originally came from the now-defunct i-Kore and were made for their "Void" game.  I was never much interested in the Void rules, though I liked the models and collected a large number of them.  Most are still unpainted, of course, but here are some of the completed ones.  I've used some of them in a game of FUBAR occasionally; otherwise they just sit in boxes on the shelf.  That's not really fair, so occasionally they get taken out to be shown to people.  Now it's your chance...

According to the Void fluff, the Viridians are medium/high-tech militant ecologists.  As such, they mostly use dinosaur-like creatures instead of (pollution-producing) vehicles.  I can't quite bring myself to believe that such a force would be militarily effective under most circumstances; I don't think there's the remotest chance that any animal, even if genetically engineered, would ever come close to a wheeled or tracked vehicle for speed, protection or load-carrying capacity.  However, perhaps they come from a planet that has extremely difficult terrain - so bad that vehicles are at a significant disadvantage.  Anyway, they look cool... 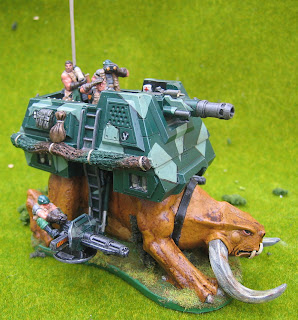 This is an enormous beast!  On its back is a howdah which contains the primary weapon: a large cannon of some sort.  There are also a couple of "platforms" at ground level that mount chain guns.  These platforms are so low as to appear virtually useless, especially if the monster is in close terrain.  However, there are pistons mounted on the "arms" that hold the platforms; perhaps they can be raised and lowered as required. 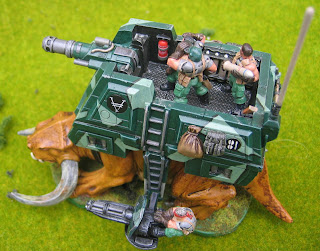 Here's a view into the howdah, showing some of the stowage and other items that I've added.  I also replaced the shell that the loader is carrying, since the original was huge.  I don't care how big the guy's muscles are; no-one could have lifted such an item! 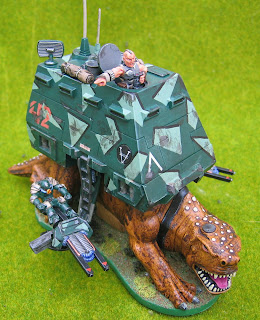 This is another very large creature; it has an armoured command and power centre on its back.  The weapons are a pair of twinned gauss cannons, which have significant anti-tank capability as well as being devastating against infantry.  Again, the placement of the armament only makes sense to me if the fighting platforms can be raised and lowered at will. I think that it's possible that the protection for the model comes from a force-field generator rather than just armour plate.  Otherwise the load would be immense and the animal itself would be vulnerable, even if the command centre was not. 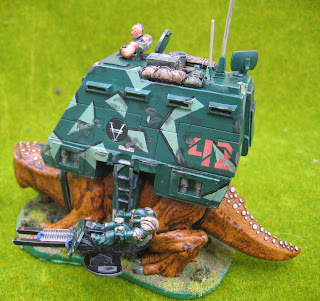 It's not often that you see a tank that can bite! 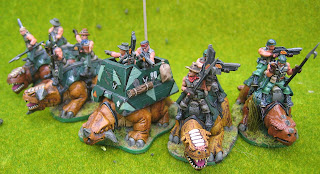 Here's a squad of infantry mounted on the somewhat smaller terrasaurs.  The sergeant has a small howdah that contains radio and other command & control equipment, while the rest of the troops just have saddles on their beasts.  I don't know whether they always dismount to fight, or if they practice fighting on the move.  Certainly some of the figures are aiming at something; perhaps their advanced gauss rifles have gyroscopic stabilisers built in!

Finally, we have a small squad of lightly-armed troops mounted on small, fast dinosaurs.  These scouts are tracking some litter louts; at least 2 of the models have found discarded fuel cans or food and drink tins.  I wouldn't want to be the offender when they catch up!

So there you have it.  A bunch of fervent sci-fi ecologists mounted on various dinosaur-like creatures.  At least, the ones I have painted so far.  I also have a number of other behemoths, terrasaurs and some flying critters still to paint, if I ever get the time.

The Viridians have many plain foot soldiers too; I'll post the ones I've done so far in Part 2 (some time).

Incidentally, the miniatures (including these ones) and the rules for Void 1.1 are still available from Scotia Grendel.  i-Kore morphed into Urban Mammoth, who produce a follow-on set of rules and miniatures called Urban War.