HOTT: The Knights of Lyonesse Strike Back!

The local schools have now restarted after their summer break.  This means that my games club in Helensburgh has restarted; tonight was the first session after a long, empty spell.  I decided to take Hordes of the Things; this always goes down well!

The last time we saw the Knights of Lyonesse was something of a disaster for them (here).  They lost a number of heroes and quite a few of their nobles in a failed attempt to defend the Tower Perilous from the encroaching Black Mountain goblins.  However, the Knights aren't beaten so easily.  Lord Vesper, Saint Florence of Artenay and the Red Knight all survived the previous battle (just!) and have raised another army.  Their bold plan is to strike at the source of the goblin's power: the Dark Tower itself!  To that end they have bolstered their force with a contingent of mercenaries. 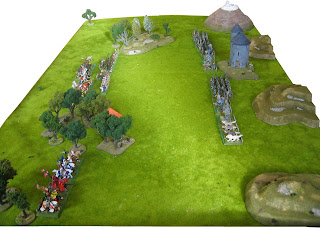 The Knights of Lyoness appear on the left of this picture.  They have 1 command (24AP) of knights, archers and squires (split on both sides of the wood with the small cabin in it) and another command (24AP) of Tilean mercenaries (pikes, crossbows, a cannon and a weird flying machine).

The Black Mountain goblins have 2 commands of 24AP each and are drawn up in front of the Dark Tower.  Their army consists of a mix of wolves and trolls, backed by hordes of infantry.  They also have a ballista!

Immediately, the knights started to work their way round the wood with the cabin, intending to flank the goblin horde.  Saint Florence, the mercenaries and the longbowmen stood firm in the centre, awaiting the inevitable onslaught as the goblins surged forwards. 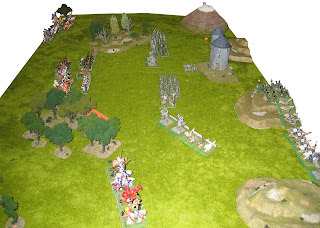 Suddenly, with a braying of horns and the clatter of hooves, reinforcements arrived (more players, arriving late!).  Each side received another contingent of 24AP, taking the totals to 72AP apiece.  Oddly, both sides decided to deploy their extra forces on their left flanks, so the new armies entered at opposite ends of the table from each other. 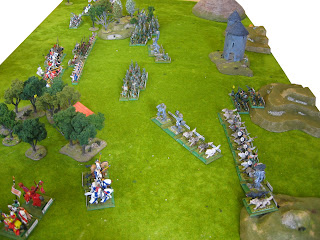 The Red Knight and Lord Vesper saw the huge swarm of enemies now approaching them and immediately decided not to continue their flanking move.  They started to retire back round the wood, to jeers and boos from the Goblin players ("Run away!  Run away!").

In the centre, the longbows and cannon took a savage toll on the approaching hordes, while on the far side the goblins moved to occupy the wooded hill.

The goblin's right wing attack went in piecemeal.  Firstly, the two trolls attacked the Tilean infantry, but were quickly surrounded by large numbers of men with long, pointy sticks.  It took a while for the trolls to die, but die they did!

Huge numbers of goblins poured over the wooded hill, only to meet a line of stout billmen.  The goblin horde was so tightly packed that they couldn't retreat and the front line was cut down mercilessly as soon as they came out onto the clear ground. 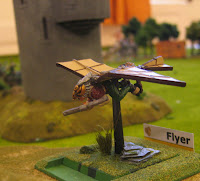 The Tilean aeronaut had flown near to the Dark Tower early in the game, in the hope of drawing some goblin attention away from their huge attack.  However their generals had figured out that he couldn't do any harm to the tower itself and couldn't be caught by any of their troops, so they just ignored him.  Equally, the Tilean general was too preoccupied to issue the flyer with fresh orders and so he sat on the hill to have a drink from his flask, compose a poem, and watch the battle in the distance. 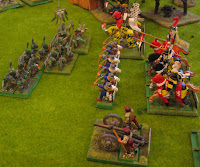 By the time the central goblin force reached the opposing lines, they had been shot to pieces and were much reduced in number.

Seeing this, the goblin reinforcements gave up chasing Lord Vesper and the Red Knight.  Instead, they came round the wood to join in the fight in the centre.  One troll raced ahead of all the others and immediately flattened the knights who fought beside Saint Florence.

With this encouragement, a band of greater goblins including their chieftain took on the paladin herself - and won (from memory, this was a 6-1 roll in favour of the goblin warband!).  Saint Florence left the field, wounded and ashamed; it seems that purity of spirit isn't always enough to win one's battles! 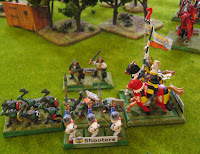 The goblin's success didn't last long, though.  Seemingly from nowhere, some Tilean assassins sneaked through the melee and assassinated their general.  Although a nearby troll tried to avenge him, the sneakers just dodged and ran away.

Despite being disappointed in their heroine, there were plenty more knights to fill in the gap, especially when Lord Vesper and the Red Knight came back round the wood.  In particular, the archers fought like demons, killing huge numbers of goblins in hand-to-hand and with their shooting. 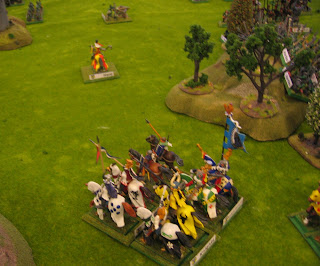 Unopposed, the fresh body of knights on the extreme end of the table came round the wooded hill and marched straight for the Dark Tower.  Their hero (a distant relative of Sir Roger the Castellan, who died at the Tower Perilous) saw the goblin's ballista all on its own in the middle of the battlefield.  He spurred ahead of the main body and charged it, slaughtering the crew and destroying the apparatus with a few mighty blows. 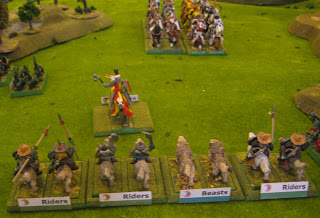 He then paused for breath (a series of '1's rolled for PiPs) while a significant part of the goblin reinforcements bore down on him. 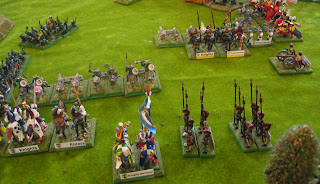 The goblin wolf riders ran straight over the exhausted hero, but then had to face a line of knights.  Worse, the Tilean pikemen were marching forward to lend a hand.  A number of goblin foot warriors stood nearby, but they were the demoralised remains of 2 broken commands; they just huddled in front of the tower and waited for their end.

Between them, the knights from the reinforcement column and the mercenary spearmen wiped out most of the wolves and their riders.  They also slaughtered many of the demoralised hordes. 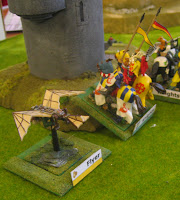 In the last few moments of the game, a pair of knights broke off from the killing to attack the Dark Tower itself.  The Tilean aeronaut put away his quill and parchment and joined in.  Together, they forced an entry and captured the enemy stronghold, thus turning a rout into a crushing victory!  The Black Mountain goblins will rue this day for a long time to come!