So, yesterday we went to Claymore 2012.  What is "Claymore"?  It's Scotland's largest wargaming show, held in early August each year in Edinburgh.  I've not always managed to go to this show, but this year the timing worked out quite well.  This year I took just my younger son (10) with me.  My older boy preferred to visit friends and my daughter is still a bit young for that sort of thing.  Also, (along with my wife) she's probably not interested.

This is not an attempt to document the entire show.  Others have done that very effectively in their own ways (for example, on the Wappinshaw blog).  Rather, it's a very personal account of our day out.

It takes us just short of 2 hours to drive from Helensburgh to Telford College, Edinburgh.  This is quite tedious, of course, but since #2 son is very interested in music we listened to CDs in the car.  On the way out it was a recording by "Canadian Brass" - my son is learning trombone and was interested to hear the sorts of things that a small ensemble could play.

After a quick wander round to get a feel for the number and types of tables & traders (lots of both!), we were given a quick demonstration of the Urban War sci-fi rules.  #2 son took a squad of Viridians (regular troopers with assault rifles) and the demonstrator took a squad of Gladiators (close combat specialists with less formal organisation, equipment and uniforms).  The Gladiators charged towards the troopers, but without making much use of cover.  #2 son gleefully gunned down half of them and unexpectedly killed a further one in melee, at which point the remainder were deemed to have fled.  On that showing, I'd say that Urban War is merely a copy of Warhammer 40K, but using d10s rather than d6s.  However it's hardly a fair or comprehensive review!  Still, I don't think that this is the set of rules for me...

We didn't get very much further round the hall when we stopped to look at a table run by Bathgate Wargames Club.  Before we knew it, we were roped in to the game and had become highwaymen, intent on looting a pay chest in a nearby coaching inn! 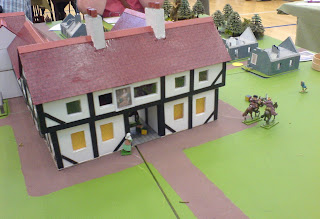 There were 4 teams; each had 3 ruffians intent on mischief.  In the picture above, you can see the inn, plus 2 of my gang who had just attacked a party who were on the way to a duel.  I killed one of the duellists and knocked out the other, along with the doctor who was accompanying them.  My 2 men then headed off the table with their captives, intending to hold them to ransom.  I also had a fine pair of pistols to sell on the black market! 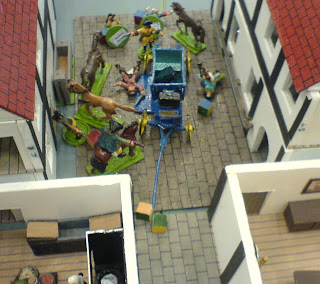 My 3rd man followed #2 son's gang into the inn courtyard from one side, just as another 3 highwaymen (played by another young lad) entered from the far side.  There was chaos in the courtyard as everyone shot at or charged everyone else.  Guests at the inn also fired out of the windows, adding considerably to the carnage.  Finally we each had one man left standing.  #2 son's rogue was bleeding badly so he mounted up and tried to escape, but ran straight into a group of approaching soldiers.  It'll be the gallows for him, I think.  My thief managed to pry open the pay chest in the wagon, but was then stabbed in the back by the other young boy's last ruffian.  However, he got his just deserts not long after as soldiers surrounded the inn and forced him to surrender.  Another one for the hangman's noose!

So, did I win?  Not quite - the 4th player was a canny woman whose party of highwaymen had managed to stay away from all trouble and had captured (and ransomed) a lady on horseback.  Seems that this lady and her horse were worth more than the duelist that I had caught, so I lost on a technicality.  Still, I collected 54 guineas and 2 pence (!) and was given a card describing my achievements, which was a nice touch:

Lunch was a quick and uninspired affair, involving chips and cola.  Not my favourite food, but at least it kept us going for a while. 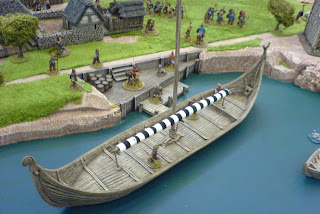 We walked around for a bit after eating, mostly looking at the tables in more detail.  One in particular caught my eye; there was a gorgeous setup depicting a Viking raid.  This was a diorama rather than a game in progress, in the sense that the models had been set up and were left in place.  The owner (or rather, the owner's daughter and wife, I think!) offered us a quiz to do.  This had questions along the lines of "how many sheep are there?" and "what's happening to the monk?".  The table was loaded with little vignettes and we spent some time looking at it from all angles trying to spot all these amazing details.  We must have done something right, for we answered all of the quiz correctly (though we needed a little help to find the rabbit - I really think that was a bit of a trick question!). 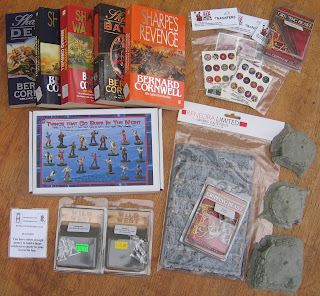 We spent part of the afternoon wandering around the traders so that I could indulge myself.  As you can see from the picture, I bought quite a bit.  Firstly, I found 5 Sharpe novels for £1 each.  I already have some Sharpe novels, but I couldn't remember which.  However at £1 each I was prepared to take the chance that I was doubling up on some of them.  If so then it would have been Oxfam's gain, but after checking it seems that I didn't have any of these after all!

I bought a number of things to help my Saga project along.  There are some shield decals and flags with which to finish off my Scots warband.  Also I bought some wattle-and-daube fences by Renedra and some Pictish dwellings from Sheltrum Miniatures' "Once and Future" range.  Finally, some Dark Age pigs/swine to act as an objective or just to get in the way.  Incidentally, the Saga dice that have been unavailable for so long will supposedly be back in stock within a week or so.  I was told that each new production run was twice the size of the previous one, so let's hope that they don't run out quite as quickly this time!

I've been promising myself some more zombies for a while and so I obtained one of the Blue Moon box sets.  It's not that I really need the numbers, but I like the variety!  These are not as cheap as plastic zombies, though they're not a bad price for metal.  Ah, just wait until the Studio Miniatures plastic zombies and the recently-announced Wargames Factory vixens come out; that'll give me even more variety!

To my surprise, #2 son also found a number of items to buy.  We scored some Lego minifigures at the bring-and-buy as well as buying some new 1:72nd modern US troops (I'm not sure what he plans to use these for; they don't fit in with any scale or period that I use myself).  He also bought a blank dice and a few cheap 2nd-hand Heroclix miniatures.  One happy boy...

Traveling home was pretty much the same as the outward journey, except that we played a different music album.  I even found that I still had some money left, so I'm quite pleased with that!