The remote Kzinti farming planet of Eridani Prime has been plagued by minor raids from Orion pirates for some time.  However, worrying news has just come from a spy; the Orions are planning a much larger assault that will overwhelm local defences.  Hurriedly, the Kzin gather what ships they can muster and prepare to leave, but just as they set off sensors indicate the arrival of a number of unknown vessels!

On the face of it, this is a fairly standard convoy "gauntlet" scenario:
However, just to ring the changes, I decided to randomly assign each of the 4 naval captains (but not the freighters) a random objective; these would determine the winner of the game rather than the capture, destruction or escape of the convoy.  The possible, vaguely worded objectives for the Orion were:
Possible Kzinti objectives were:

From the right came the Orion forces of Rear Admiral G: the heavy cruiser Erebus and the corvettes Pirate and Buccaneer.  This was a very powerful force, but the admiral's objective was "Don’t take risks with your nice, new ships!", so any damage taken would count against the player when deciding who had won. 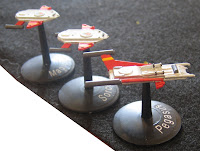 From the left came the slightly weaker squadron of Commodore A: the light cruiser Pegasus and the frigates Magician and Sorceror.  Their commander drew the "Look at all that loot! You’re going to be rich!" objective; this looked like a very good fit as the Pegasus was equipped with a needle beam that was perfect for selectively knocking out engines or other vital systems without too much collateral damage.

For the Kzinti, Strike Leader M entered in the middle of the first wave of merchantmen on turn 1.  He had the light cruiser Fang and the destroyer Tiger under his command, but was secretly thinking "It’s not safe here!  You might get killed!  Run away!"

The rest of the Kzinti warships came on in the second turn and were controlled by Pack Commander J.  His squadron comprised the destroyers Panther, Leopard and Lynx and his objective was to "Save the children and women!" 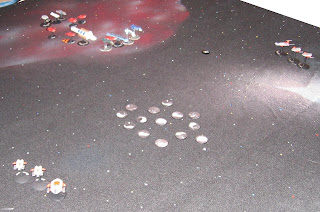 From the beginning, both Orion groups advanced cautiously, whilst the convoy and its escorts accelerated as hard as they could, aiming to breeze past the raiders' lighter squadron whilst keeping the Orion heavy cruiser on the far side of the asteroid field.
The Kzinti light cruiser launched a salvo of missiles at her Orion counterpart but badly overestimated the enemy ship's speed; the missiles were well short of the target.  The Orion heavy cruiser managed an immensely lucky long-range shot with her beam weapons and gutted the leading Kzinti destroyer (Tiger).  So much for her commander's secret objective of "Run away!  You might get Killed"!  This did trigger some retaliatory fire from the Kzinti fleet; whilst the shots didn't cause any systems failure on the Erebus, they unwittingly hurt the admiral's victory conditions of "Don’t take risks with your nice, new ships!" by bending the hull plating. 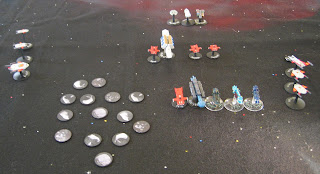 As the merchantmen swept past the barely-moving Orion ships, the Santa Teresa (dark blue, to the right of the first line) was targeted by the Pegasus' needle beam.  She suffered major engine damage, just as the Orion commodore hoped.
On the other side, the Orion's Erebus unleashed a full cruiser volley at the bulk carrier Pride of the Orient.  She survived, but took terrible damage.  Most of her systems were wrecked and her holds breached.  Since she was determined to be carrying flour (see here), she left a long cloud of fine, white particles in her wake.
Other exchanges of fire between the various warships left several of the smaller combatants on both sides scarred.  In particular, the closer Orion squadron suffered as the Magician was reduced to a hulk and the Sorceror took an unlucky hit to her fire control (and thereafter played no useful part in the game).

The Trap is Sprung?

The raiders were now well placed to turn after the convoy and use their superior acceleration to run it down.  However, as the freighters and their escorts went hurtling past, both Orion commanders made terrible blunders!  The Pegasus turned right instead of left; while on the bridge of the Erebus confusion reigned as her captain failed to give any orders at all (In past games, I've been quite relaxed about allowing some of the younger club members to do what they intended rather than the orders they actually wrote.  However, the Full Thrust rules are very clear about the penalties for impossible or unintended movement orders).  This left both Orion heavy units badly out of position, while their lighter ships were either on the wrong side of the asteroid field or were battle-damaged and ineffectual. 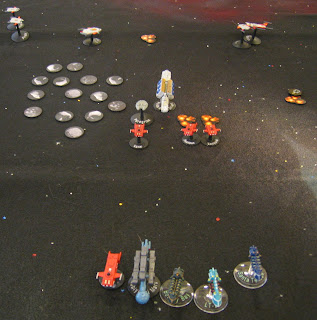 To add to the farce, both sides fired on the damaged, drifting bulk carrier.  The Kzinti warships beamed the crew off and then the Leopard tried to scuttle her with phaser fire, but missed.  At the same time, the Erebus fired at long-range, but this time her near-legendary accuracy deserted her and she also missed.  This was much to the relief of the other Orion commander, who was still hoping to capture a prize!  Erebus did manage to destroy a couple of small freighters instead (the Olympic and the Martian Princess). 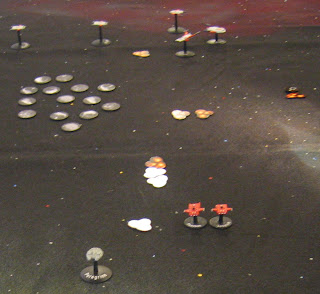 As the convoy fled and left the Orions in their wake, a few parting shots finally managed to destroy the Pride of the Orient as well as the destroyer Lynx.  But this was too little, too late and the pirates could only watch as their targets fled into hyperspace.

So, who won?  Let's see:
The victory conditions were deliberately left a bit vague and open to interpretation.  Who do you think deserves the medals and who should be demoted for this encounter?