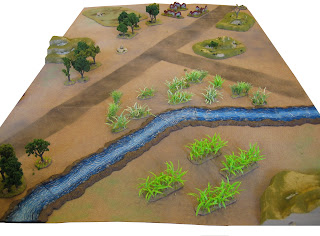 The crew of the Klingon starship P'Rang (last seen taking a hunting vacation on the planet Prehistorica) have a new mission.  An agent of theirs - an alien trader called Hoix - has broken protocol to request immediate evacuation from his spying assignment on the planet Tantalus III.  Their task: to recover the spy before the local defence forces find and arrest him!

Because this is a covert mission, the Klingon away team have flown in and landed close to the rendezvous point.  Tantalus III is a medium technology world with a lot of air traffic, but it's well within their capabilities to detect illicit transporter beams.

The Klingon shuttle is just off the nearest edge of the board; all they have to do is walk to the buildings, meet the agent, escort him back to the shuttle and return to their ship.  Should be simple, right?

The crew decided to enter the table from the bottom left, between the river and the road.  Immediately Vagh, the security chief, exclaimed "This can't be right, Captain!  We are supposed to meet Hoix at a farmhouse, but all I see are ruins.  I advise caution!"

"Bah!" snorted Mor'tah, the captain.  "We need to do this quickly.  Come with me!"  He set off down the road towards the remains of the dwelling and the rest of the team followed him. 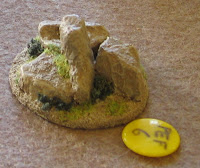 Initially, the Klingons' confidence seemed justified as even the highest-rated PEFs (Possible Enemy Forces) turned out to be just the security chief's imagination playing tricks on him. 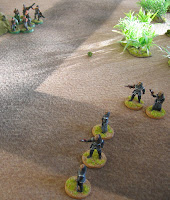 However, this couldn't go on forever.  The away team had almost reached the road junction when some of the local planetary militia came round the corner of the hill.  The starship crew were not really equipped for a firefight and mostly had only short-ranged sidearms; nevertheless those that could immediately opened fire on the natives.

The militia returned fire, though with more enthusiasm than skill.  Nevertheless, their initial volleys left Maal (security) apparently dead and several of the other Klingons diving for cover, grunting as they shrugged off light wounds (remember that many of this away team have powerful attributes such as Hard as nails and Resilient). 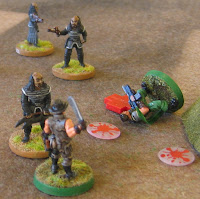 The tide turned when the Klingons began to hit their targets and in a matter of moments 2 of the militia were dead, 1 was badly wounded and two had broken and were running for their lives.  Vagh brandished his bat'leth and charged the sole survivor.  Amazingly, the soldier chose to stand and shoot - but he made the bad mistake of missing the approaching Klingon blademaster.  The melee was over very quickly as the starship's security chief dispatched the brave farm boy.

"Two to beam directly to sick bay.  Medical emergency!" called Sira into her communicator as she administered first aid to the stricken Maal.  The captain added "Take the prisoner with you as well.  We need to know what's going on here!"  As the medical officer and the casualties vanished, Mor'tah spoke again.  "Well, they know we're here now.  We'd better get a move on, before any reinforcements arrive". 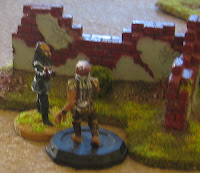 The remaining 4 Klingons jogged down the road and up to the ruined farmstead.  Immediately a strange alien stepped out from hiding.  "Captain, you've got to get me off this planet right now!  We must leave immediately" he cried.
"I give the orders round here!" roared Mor'tah.  "What is so urgent that you fail to report properly?!"
Hoix replied "Bugs, captain!  Bugs!"

Although the captain couldn't understand why the alien was so afraid of a few cockroaches, his obvious terror was unsettling.  The group started to run back towards their shuttle. 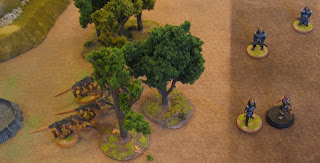 They had traveled most of the way back when several giant bugs erupted out of a newly-formed hole in the earth.  The Klingons opened fire, but didn't achieve much.  Before they knew it, the creatures were upon them!

Vagh, the blademaster, managed to fend off 2 of the beasts in a dazzling display of combat skills, whilst N'Kara just held her own against a single monster, albeit one with 2 heads.  Hoix fled, screaming.

Leyra joined in the melee to distract the 2-headed bug, thus allowing N'Kara to make a killing blow with her bat'leth.  Mor'tah fired at the others, causing one to back off, screeching and roaring.  Even though he was only facing one opponent now, Vagh only just managed to fend off its ferocious assault. 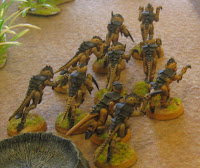 Just then, another hole opened up near the road junction and a larger swarm of bugs poured out of it.  Strangely, everything seemed to go into slow motion as the Klingons fought for their lives; the bugs seemed to be barely moving.  [Most of the game had gone by without the combined activation rolls of '7' needed to trigger a bug hole - but now they came thick and fast.  Luckily for the Klingons, the bugs then rolled a long succession of '5's and '6' for activation and so couldn't move]. 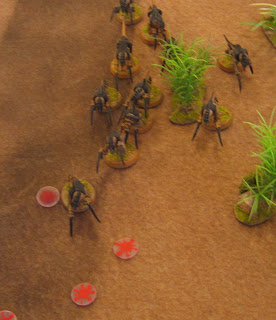 The Klingons turned and fled, Mor'tah having taken out Vagh's last hand-to-hand opponent with a superb disruptor shot.  The bugs were fast, but the away team had a head start on this swarm. 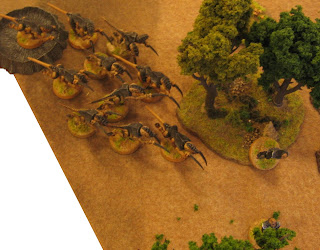 Even as the last 2 Klingons approached the edge of the board (where their shuttle was hidden), a third hole broke open and yet more creatures poured out of it.  The stragglers barely made it to the shuttle in time; there were a few bangs and thumps on the hull as it lifted off and sped back to the P'Rang.