An Island of Calm?

I've mentioned the "Golden Hills" housing complex a few times in my ATZ campaign, starting with Episode 2, I think.  Well, I finally got round to building a model, so here it is: 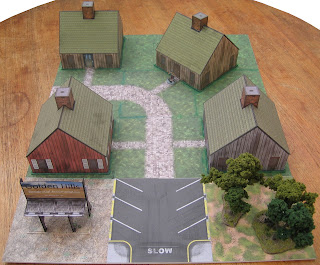 I'm fairly self-critical about this, as there a number of things on which I've compromised (due to lack of time) or which I only thought about after having started the build.  Here are some of them:

So, having got that out of my system, what can I tell you about the components? 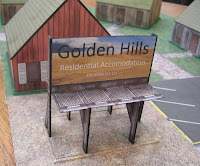 The billboard comes from WorldWorks Games "Streets of Mayhem" kit, though I've strengthened most of it with mounting board.  I designed the "Golden Hills" poster myself, using a picture from the internet as the background.
In the past, I made one of these billboards and fixed it permanently to a 7" tile; this is one of the more awkward pieces to store in my terrain boxes.  So, this time I glued the billboard to a piece of mounting board that was just big enough for it and I used strips of balsa to make a socket on the tile.  When in use, the billboard will sit firmly in place on the tile, but it can be separated easily to be put away. 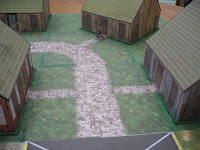 The 4 buildings are all variants of the cottage from Stoelzel's Structures, though I've scaled them down so that the walls are now 6" long rather than the original 7".  2 of the cottages have the same colour of outer walls as each other; the other 2 are unique.  Note that the kit has been upgraded since I made these and now has other options for the walls, such as wood shingles or brick.

On to the interiors...

This cottage belongs to Edna, the crazy cat lady.  It's sparsely decorated, if at all and the interior walls and floors come from the original kit.  What furniture it has is a mixture of stuff from WorldWorks Armoury and from the cottage kit itself.  Again, at the time I made this, the furniture that came with the cottage kit was fairly rudimentary, but this has been upgraded considerably since.

Now many of my readers will remember that Vampifan recently described his build of the Stoelzel's Cottage.  This was, as ever, a very impressive building and I'm quite jealous of the amount of dedication that Bryan puts into such models.  I think it's worth pointing out some differences in approach between me and him: 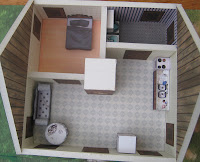 The next cottage belongs to Alfred and Gertrude, stars of "The Search for Gramps and Nanna" and grandparents of John the Photographer (the lead character in my ATZ campaign).  It has different floor coverings and wallpaper; these are just blocks of patterns designed originally for doll houses, I think.  This cottage also has some nicer furniture, courtesy of the WorldWorks "Shellendrake manor" kit. 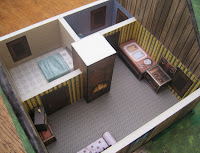 After that, we come to the home of Abe (the "crusty old goat").  I suspect that he's been widowed not so long ago, as his cottage contains some nice furniture and decoration, but there's a spilled can of beer on top of the television. 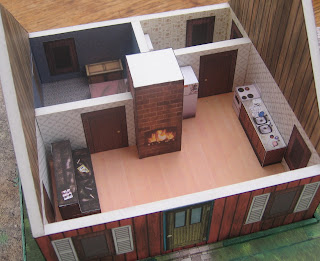 Finally, here is the house where Captain Salty lives.  It can be identified by the sea-chest in the bedroom, if nothing else.  (Hmm.  Perhaps I should put a picture of a ship on the wall, or an old ship's bell by the front door, or something like that.) 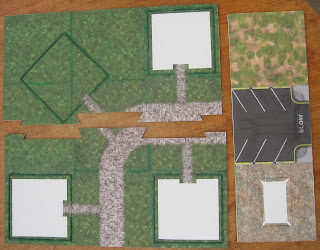 For this location, I used very large pieces of foamboard (21" long).  These have the advantage of not being shaken apart when playing at the club (the "earthquake" effect, where lots of small tiles end up misaligned or with huge gaps after an hour's play).  However, the disadvantages are that such long bases might be prone to warping and also they won't fit into any of my storage boxes.  I may yet have to cut them into smaller sections just to be able to pack them away for transport.
I built the base for the cottages in 2 sections, dovetailed to prevent them from slipping.  The car park and sign base was an afterthought, so it doesn't have anything to hold it securely in place.
Most of the textures came from Worldworks Games: the grass and paths are from Shellendrake Manor while the car park and scrub are from Streets of Mayhem (I think).  However, the desert/wasteland under the billboard is from Fat Dragon's "Rio Draco" set.

Here's a closeup of the footings for one of the cottages.  As I mentioned before, this is just strip balsa, glued in position and coloured to (try to) match the surrounding grass. 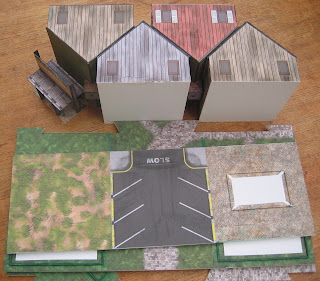 The various components pack away quite neatly.  Or at least, they would if I had a box that was long enough to hold the ground tiles!

With a project this size, it often seems to me like something of an anticlimax when it's finished.  I'm left with a slightly empty feeling; what do I do now?  I guess I'll just have to use them in my next ATZ game!
There's also a nagging feeling that I haven't really finished after all, that I've forgotten something.  If you'd like to see something else in this build, if you think I've overlooked or forgotten something then I'd really like to know.  You have until Tuesday, before the next meeting of the Helensburgh Games Club.  Thanks.