In Praise of Plastic Women

Most 28mm models of modern civilians are male, whether armed or not.  There are some females available, but for cheapness nothing beats em-4's gangers.  2 of the 5 figures on each sprue are female; here's one of them: 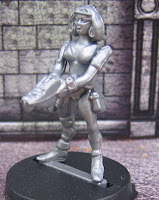 Um.  It's not the most impressive figure, is it?  Neither the sculpting nor the moulding of the model are up to the standards of the industry's best.  However, it is plastic and it is cheap; these put together make this a converter's dream! 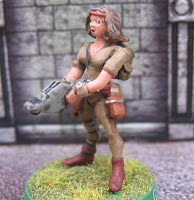 Here's one I painted a long time ago.  This figure has been cleaned up a bit (mould lines removed, filler applied to the shoulders and other places), but is otherwise just a straightforward paint job.  This is "Green Eyes", a junior gang member or not-very-confident zombie apocalypse survivor. 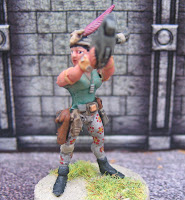 One of the interesting things about the em-4 plastic models is that each figure comes in 3 parts: body (legs & back torso), upper (front torso and head) and arms/weapon.  They're designed so that you can mix and match the parts, up to a point.  Jade is made from the same legs and arms as before, but using a different front/head part.  She's also a gang member, but looks quite a bit more confident. 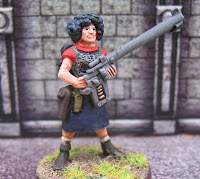 As well as the plastic parts, metal weapon and torso/head parts are available from em-4.  Sally has been made from the same body as before, but with some of these metal parts.  She has "big hair", a considerable scowl, some form of body armour (chainmail?!) and carries an autocannon.  This time I decided that the skinny legs were not what I wanted, so I gave her a knee-length skirt from green stuff.  Not someone I'd like to meet in a dark alley! 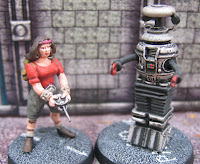 Finally, Penny uses the same legs as all the others and the same top and backpack as Green Eyes.  She's a more significant conversion, though.  Firstly, she has some hiking shorts instead of the lycra leggings.  All the bottles, holster & other gear have been removed from her belt.  Finally, instead of a pistol she holds an R/C unit.  This is used to direct her friend, the robot "B-9" [The robot is probably made of fibreglass or plywood.  I don't think it would be able to hurt the opposition - but it should have rules which would encourage creative game-play!  I'm working on it...]

One of these days, I'd like to run a zombie game set in a Science Fiction convention.  This is, of course, at least partly in homage to the book "The Night of the Living Trekkies".  The book wasn't bad, but the trailer was awesome!  When/if I do this, Penny and her robot will appear, as will my Star Trek re-enactors Pike and Pavel (last seen being chased by zombies here).  Plus many other stereotypes and characters yet to be decided...
Posted by Colgar6 at 17:01