A number of the games I play (or intend to play!) use random events to add interest and narrative drive.
In the case of All Things Zombie (ATZ), the base rules have some random events, but I wanted more!  As many readers will know, I created my own deck of ATZ event cards and these seem to have been well received by the zombie gaming community (people who play zombies games, not zombies who play games!).
I'm in the middle of designing and testing a similar set of event cards for Full Thrust, especially with a Star Trek flavour to them.  Although this is still work-in-progress, it's time to share the early version with the world!  Here are some playtest games in which these event cards have appeared: 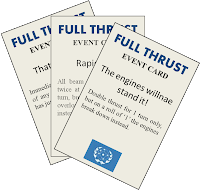 Unlike some other games, Full Thrust has no mechanism for random events built into the rules.  So as well as coming up with a set of events and their effects, I also needed to devise a mechanism for them to enter play.  I chose to copy the model from the Doctor Who Miniatures Game (DWMG).  In that game, each side is dealt a hand of 3 cards at the start of the game.  The holder may play a card at any time, but with only 3 cards (and no way of replenishing them), it is important to pick an appropriate moment.
For my playtests of Full Thrust event cards, I've added the stipulation that a force may not play more than 1 card per turn.
Note that I've been very careful to state that the hand of 3 cards is held by a side (aka a force), rather than by a player.  In a big game it would probably introduce too much chaos for each individual player to have their own cards.  You could either give all 3 cards to the admiral in charge of that side or perhaps distribute 3 cards randomly between the players on a single side (but remember: only 1 card may be played from that force per turn!).

There are 2 parts to each card in a good deck:

I haven't spent a lot of time or effort on the appearance of this set of events yet.  In the fullness of time, I hope to come up with some attractive graphical elements that will really make these cards shine.  That might include borders, pictures and/or quotations; all of these were used in my ATZ cards:

For now, the playtest cards will have to remain fairly plain.

The events I've chosen so far are partly inspired by real-life naval warfare and partly by memorable scenes or common tropes from a variety of science fiction space battles.  For the most part, the cards are targeted at Star Trek (all versions), though it would be just as easy to make a set of random events that were derived from Star Wars, Babylon-5, Battlestar Galactica or whatever other universe takes your fancy.
The events are not intended to be automatically game-winning, but rather small, flavourful occurrences that add to the narrative.  Of course, even a small event can have dramatic consequences when it occurs at just the right time!

Where Can I Get Them?

If I've done this correctly, then the draft set of 32 cards can be downloaded ==> here <==.  This is a PowerPoint file with 8 cards per sheet.  I've not produced any back for the deck, so for now you just print off the 4 sheets (onto thin card?) and then cut them into separate cards.

Eventually, I hope to expand the number of cards to 54.  I'll also improve the appearance so that the events are prettier to look at (yes, I believe this does matter!).  Putting these goals together will enable me to upload the finished designs to Artscow.com or a similar print-on-demand service.  I'll then be able to have a professionally-made deck of Full Thrust event cards.
Of course, when/if I achieve the above, I fully intend to share the result so that anyone else who is interested can print a copy of the deck, or can use the design for anything (non-commercial) that they wish.

In the meantime, I would really appreciate any input from interested gamers.  I need both constructive criticism of the events that I've devised so far, but I also need ideas for the other 22 cards which would be needed to bring the deck up to strength.  If you wish to participate in this then I'll look forward to hearing from you (though I retain ultimate editorial control, of course)!

Update: the finished deck of cards is described here: http://colgar6.blogspot.co.uk/2013/05/full-thrust-event-cards-final-version.html .  This supercedes the draft version presented in this article.