Normally in a mid-week post, I report on the game that I hosted at the Helensburgh Games Club's weekly meeting (Tuesday evenings during school term times, Victoria Halls, 6pm-8pm).  Unfortunately, this week I ended up with 8 players and this contributed to making everything so hectic that I forgot to take many pictures.  Those photos that I did take were rushed and have turned out to be very blurry and poor quality.  I won't be able therefore to provide a full narrative of the battle in any way that I'd be happy to publish.  Bah!  More on this later... 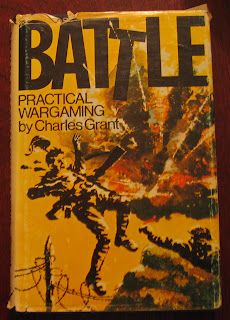 Did any of you start wargaming with this book, I wonder?  When I was a boy, my father gave me a copy that he had bought one day while at work in Glasgow.  He used to go for a walk at lunchtime and Glassford's model shop in Cambridge Street (long gone and sorely missed!) was just a minute or so from his laboratory.  It was one of the best things he ever did for me, though I don't know that dad ever appreciated this.

My copy of Battle is still intact, though the dust jacket is tatty and there are various pencil marks inside the book.  The rules themselves are very simple, based around alternate turns and straightforward "move, shoot" mechanics.  However, the book also described platoon and company organisations, the use of support weapons, effects of cover and so on.  For a young boy, this was gold dust!  All the rules proper could be written on a single side of paper and memorised easily.

On club night, I had taken along some of my old 28mm VOID models, from the Junkers and Syntha forces.  However, I didn't intend to use the VOID rules, but rather we played the game using FUBAR.  This is a free set of modern or sci-fi skirmish rules that are explicitly designed to fit on a single side of paper (wow, deja vu!)
FUBAR is easily adapted to any setting and there are many fan variants, including Star Wars, Warhammer 40K, Stargate, Starship Troopers and so on.  And, of course, my own adaptations for VOID.
So, how does this relate to Battle!  Well, in some ways FUBAR is a descendant of the older rules.  All it needs is a bit of imagination; the core mechanics are learned within a few minutes and play is then fast and furious.  I suppose that I'm suggesting FUBAR as an easy way in for the younger children at the club, for whom Warhammer 40K is (in my opinion) far too complex and far too restrictive in the forces you can field. 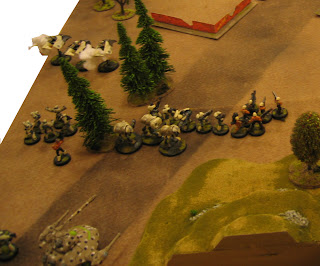 Syntha forces (mostly robots, with one squad of bionic marines and a couple of biomechs/cyborgs) advance along the road.  Their jetbikes had charged ahead earlier, on their own, and had not lasted long against even weak long-range Junkers fire. 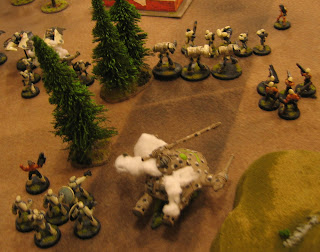 A Syntha grav tank exchanges fire with the Junkers cannon and comes off worse, while the Syntha infantry continues to advance steadily (relying on their armour for protection rather than on cover!) 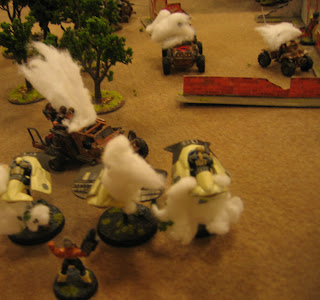 One of the Syntha cyborgs peers through the wreckage of the grav bikes to destroy a Junkers buggy.  The other cyborg had just destroyed the quad-bike in the top right of this picture.  In fact, there are a lot of dead vehicles here, from both forces.  Who'd have thought that soft-skins were so vulnerable to infantry weapons :-) ?

Sadly, time ran out just as the Junkers started to counterattack.  Sandrunners (troopers with explosive lances, riding 2-legged lizards) charged some of the larger robots, while human bombs and legionnaires with thermite poles attacked the other Syntha grav tank.  I think (at least, I hope!) that all the players had a really good evening.

So, this post is a bit rambling, but I hope my point is clear.  Start simple and make it fun!