I'm feeling quite pleased with myself: I finally managed to tidy up and clean my hobby desk!  This has needed to be done for at least a month, though probably rather longer in reality.  Finally, I'll be able to do some painting again!

The downside of this is that I haven't really done much model-making for a number of weeks.  This is especially so for terrain projects, which I tend to work on in my garage.  The weather has been so grey, damp and cold during the winter that I've barely ventured down there, even though I have a pressing need to make up some new buildings.

Since I've got nothing new to show right now, I'll have to make do with some of the older stuff in my collection.  What better than a horde of zombies to whet some interest :-) ? 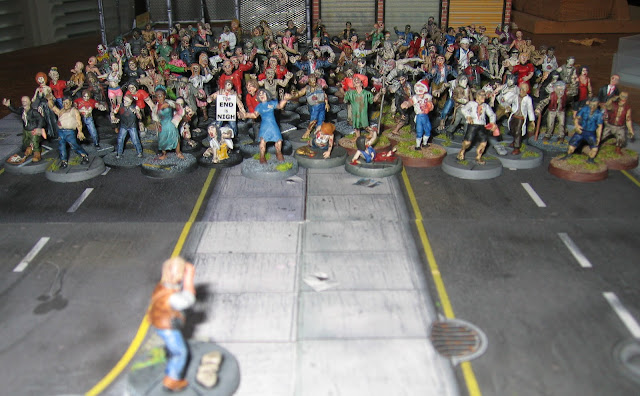 So, here's John (the photographer) trying to take a group shot at the recent zombie reunion ("HordeFest 2013").  These are all the finished/complete zombies I have.  At least, all the modern ones, as there are medieval/fantasy ones in some of my Hordes of the Things/Warhammer armies as well. 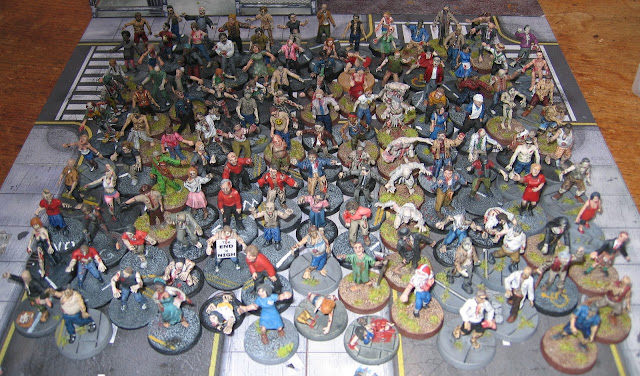 Another shot of the same mob.  For the statisticians amongst you, there are 10 zombies in each column, apart from the rightmost - which has 9.  Since there are 13 columns, I make it a grand total of 129 zeds.  Of course, I have at least another 70 or more yet to make up and paint!

Even in a horde, there are some models that are a bit more memorable than others.  Here are a few of my favourites: 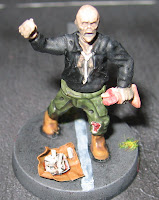 This guy was one of the first zombies I ever painted.  I don't think it's that good a job, to be honest.  However what makes him special to me is the bag of chips (French fries if you are American) on the ground.  Obviously he's found a local takeaway that served him with a "Leg Supper".  It's a Scottish joke, probably doesn't translate well... 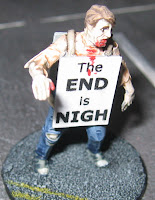 Sandwich-board zombie is one of my most recent models; you'll have seen him before if you follow my posts.

"You looking at me?"  "Who's laughing now!"  What more can I say, these guys are great! 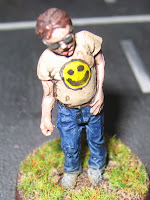 Finally, have a nice day!