I've just returned from a Sunday family outing to the wonderful Kelvingrove Museum, where we saw the "Pharaoh: King of Egypt" exhibition.  That being so, there was never much doubt about what I would post today: 28mm Tomb Guardians!  These are part of the opposition for my intrepid Egyptologists, who were showcased in a previous article. 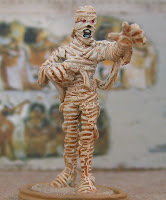 Pharaoh Set-nakhte is the owner of the tomb; he doesn't take kindly to intruders!  Figure is from Blue Moon Manufacturing. 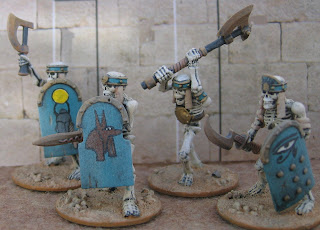 Even in death, the mummy has many faithful servants to help protect his domains.  Here are some of his elite bodyguard.  Figures are from Games Workshop; weapons are from Crocodile Games. 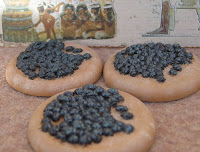 Vicious critters also live in the tomb and are tolerated or even encouraged by the undead lord.  Here are some scarab swarms.  Beetles are from Black Cat Bases.

Snakes live in some of the deserted chambers near to the surface.  Woe to the unwary adventurer who falls into such a pit!  Miniatures are from Black Tree Design.

Finally, a monstrous hybrid creature has been sent by the gods, both to keep humans out and also to keep Set-nakhte imprisoned.  The scorpion-man is from the Koralon faction of the Void 1.1 line, no longer available anywhere, I think.

So, that's the good guys and the tomb-dwellers sorted.  I still need some other groups of not-so-noble adventurers (possibly Nazis, cultists or slavers.  Maybe even Belgians, if that's not going too far!).  And if I'm going to make a game like this work then I'll need to build the tomb itself, complete with secret doors and traps.  Does anyone have any good rules for that sort of thing?