Return of the Assault on Starbase 13!

A couple of months ago, I ran a Full Thrust game at the Helensburgh Games Club entitled "The Assault on Starbase 13".  In that game, the attacking Federation fleet did stupendously badly - so much so that it has become near legendary.  Since then, I've been wondering if my scenario was too unbalanced, one side was supernaturally lucky or whether the fleet players merely blew it.  In order to answer these doubts, I decided to rerun exactly the same game again.  Call it a parallel universe, if you like!  So, here's how it went...

Federation Intelligence are aware that a flotilla of Orion pirates are operating out of an old battlestation near the Tholian border.  This starbase is heavily fortified and so the pirates have been immune to attack by local forces.  The recent arrival of capital units from Starfleet has changed the picture though: Admiral Polanski has decided to use his squadron to capture or destroy the Orion base and thus prevent the pirates from raiding this sector!

The Federation attacking fleet consists of: 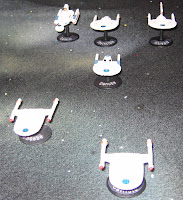 The Orion defences were: 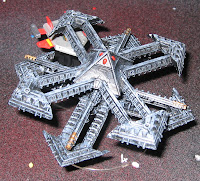 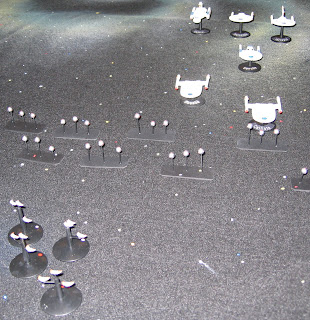 The Federation fleet approached the minefield with glacial slowness this time round (2" per turn!).  Although the Orion base commander was initially panicked by the appearance of the hostile fleet as they came out of warp, he had time to finish his 3-course meal.  Indeed, he was well into the after-dinner mints and coffee before the intruders came into range of the starbase's heaviest class-4 phasers.

For several turns, the minesweepers at the front of the Federation fleet took hits from the base's long range weapons.  At this range, the firing was not particularly effective, but it was completely one-sided.  4 squadrons of Orion fighters were launched from the starbase; they were pleasantly surprised to find that the Federation carrier didn't respond by scrambling its own fighters.

Just as the Federation sweepers breached the minefield, they were swarmed by enemy fighters and also by missile salvos (fired by the now-undocked Orion heavy cruiser Terror).  The Federation carrier hadn't launched any of its own craft to intercept, so the sweepers just had to sit and take it!  USS Phoebe was destroyed outright, while USS Callisto was crippled with failing life support and a smashed command deck.  Still, at least they had forced a passage... 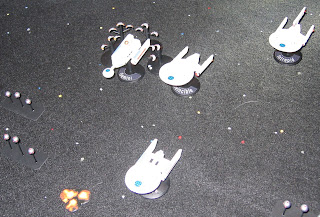 The Orion fighters now turned their attention to the USS Gemini, which still didn't scramble its own fighters in response.  2 of the Federation ships (USS Danube and USS Invincible) accelerated through the hole in the minefield, but the battleship USS Intrepid hung back in order to line up better with the gap.  This separation of forces was ultimately to cost the Federation badly! 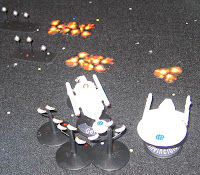 Now things started to get ridiculous.  The Federation carrier USS Gemini tried to escape the hostile fighters by accelerating and avoid the minefield by turning, both at the same time.  Neither was successful, as the ship crashed through 2 rows of mines and the nimble attack craft easily caught up with her.  Fortunately for the USS Gemini, the Orion craft finally ran out of ordnance (!) and so after their attack they returned to the space station to refuel and re-arm.  Unfortunately for the carrier, she was now badly damaged - though she had only lost 1 of her 4 hangar bays. 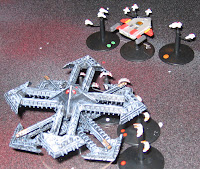 Finally, the surviving Federation squadrons were launched from the USS Gemini.  They immediately raced to attack the Terror - but the Orion cruiser was still under the umbrella of the base's defensive systems and the majority of the Federation craft were destroyed before they were able to shoot.  The last few fighters did manage to inflict a troubling warp core breech critical hit on the pirate ship, though. 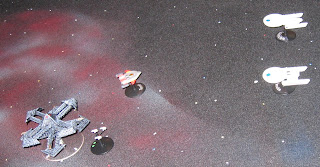 At this point, the Federation cruiser USS Danube and battlecruiser USS Invincible scored some telling hits on one quadrant of the base.  The battleship USS Intrepid was a long way behind and didn't really contribute much to the fight.
In return, the starbase played an event card to overload a pair of its heavy phasers.  To the Federation's great relief, both weapons burned out instead of unleashing a hurricane of firepower on their poor vessels.  Even so, the base's other weapons caused a lot of hurt to the USS Danube and a moderate amount of damage to the USS Invincible.  These 2 ships were just not powerful enough to go toe-to-toe with a battlestation all on their own!

At this point, we ran out of time and packed everything away.  Had we been able to continue, the starbase's rotation would have turned its somewhat damaged quadrant 2 away from the attackers and brought the undamaged quadrants 3 and 4 into play.  When that happened, the USS Danube's life expectancy would have been very short indeed.  The USS Invincible might have inflicted some more damage before it was destroyed in turn.  The battleship USS Intrepid was still too far away to be more than a minor nuisance at this stage; it would either have to flee or to tackle the battlestation on its own (and that would only have ended in one way).

I'm still wondering if this scenario can be won by the Federation, or whether they need considerably larger forces to do so.  Reason tells me that it should be possible, though I think it needs much better co-ordination and manoeuvering skills than my Federation players possess.  Here's how I would do it: