Last week, in our club game of All Things Zombie, some of the survivors reached Camp Medomak - an old military base currently being used for refugees.  The civilians and their remaining National Guard escorts had barely entered the camp before it was attacked, initially by crazed gangsters and then by zombies, attracted by the noise.  However, our 2 hours at the venue were up before the scenario was concluded.

Normally, I run a different game each week at the club, just for variety.  However, this week I decided that we had to find out what happened next, so we set up the same table and proceeded to play out the remainder of the interrupted game. 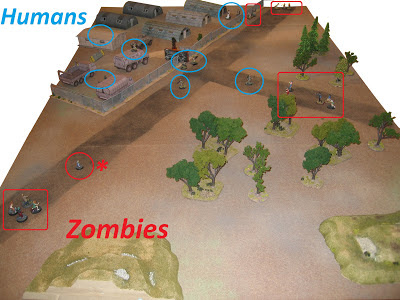 For those who cannot remember, or who haven't already read part 1, here's how it stands.  In the wrecked gate to the camp is the burning remains of the gangsters' truck.  Corporal Van Damme has taken an armoured personnel carrier from the vehicle park and is trying to turn it towards the wreck.  Other soldiers are running about all around the base (and outside it!).  Since Major Brosnan was shot dead in the previous game and since Sergeant Costner and Corporal Van Damme haven't stepped up to the mark, the troops are effectively leaderless.  Of the newly arrived civilians, John, Darcy and Lizzie are doing what they can to help, first by fighting a fire in the furthest hut, then by moving to the fence line.  Finally, Edna is still looking for a nice cup of tea in the administration block. 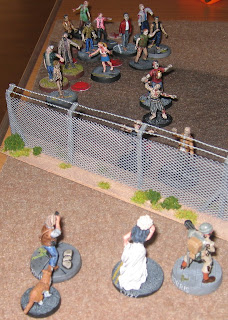 Almost immediately, a large group of zombies arrived at the north part of the fence.  This fence was already slightly damaged from attacks in the previous episode, so the arrival of such a large number of attackers didn't bode well! 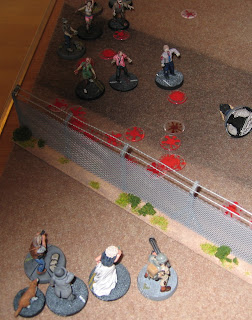 The mob of zombies at the north end of the fence looked very intimidating!  However, poor activation rolls meant that they didn't move very much.  Between Norris's enthusiastic firing of his minigun and John and Darcy's careful, aimed pistol shots, the numbers were quickly reduced and the pile of bodies against the fence grew and grew.  Darcy, at REP 5 and with the marksman ability seemed like he just couldn't miss.  Lizzie, on the other hand, was having a very bad day and barely hit any of the attackers with her pistol.

Meanwhile, in the south, various soldiers took potshots at a little girl zombie in a blue dress (marked with a '*' on the large picture above).  She unsettled them by just standing there, as if waiting for something.  3 times she was hit by bullets and knocked down, but each time she just stood up again.  Creepy! 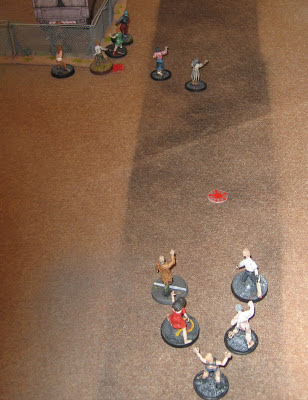 The pair of soldiers stationed at the southern corner of the base finally managed to destroy the girl zombie.
By that time, other shamblers had reached the fence and were tearing at it with their bare hands, trying to break through.  The fence was holding, for now, but these were ordinary troopers and not hero survivors; they weren't hitting many targets and the number of zombies was increasing slowly. 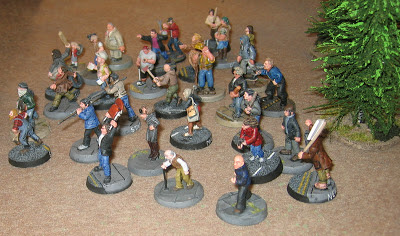 As if this wasn't bad enough, a large group of refugees now burst out of the trees to the east.  Presumably they were looking for a safe haven, but their mood was ugly and their anger was directed against the government forces. 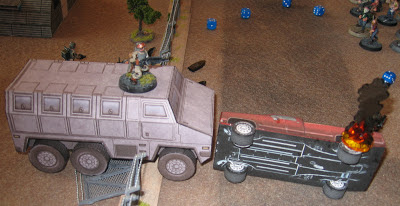 In response, Corporal Van Damme drove his APC at the burning pickup truck; the big army vehicle shunted the wreckage out of the gateway without much trouble. 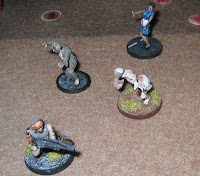 Trooper Dalton was still outside the camp at this point.  He saw the flaming wreck coming towards him and ran in the other direction.  This attracted the attention of some of the zombies on the main road; Dalton then fled into the woods with these creatures trailing some distance behind. 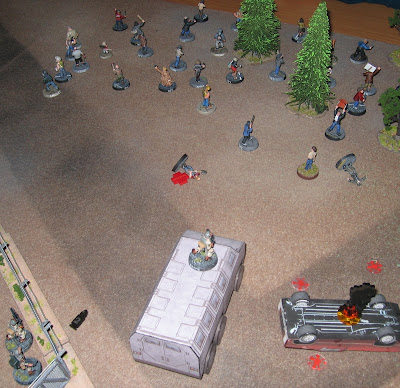 The soldiers at the gate fired on the rioters to dissuade them from approaching any closer.  Although their aim was appalling, the mob hesitated as one of their number fell, wounded.  However, it was the sight of the large armoured vehicle approaching that caused them to break and scatter. 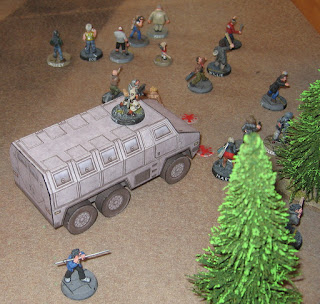 "Run, little people, run!  Run all you like" whispered Van Damme to himself as he drove the APC into the midst of the fleeing crowd.  A few of the panicking civilians were able to dodge out of the way, but others were not so lucky and were crushed remorselessly under the huge wheels! 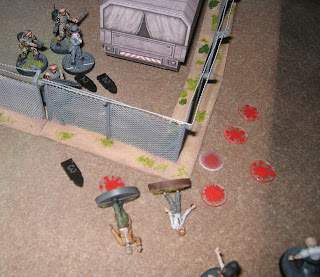 Reinforcements, in the shape of Darcy and more soldiers, raced to the threatened southern corner.  There, the pendulum swung as careful, placed shots wiped out most of the attackers. 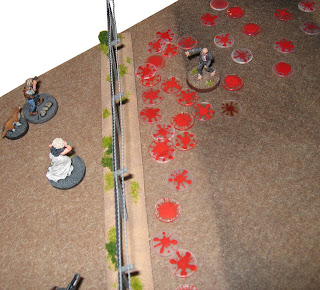 ...while back at the north end, John and Lizzie were left to finish up.

Finally, after running about from one part of the base to another all game, Sergeant Costner had found another trooper to drive the GPV for him.  They parked it in the ruined gateway and the sergeant used the vehicle's .50 calibre machine gun to wipe out zombies at long range.

Technically, the ATZ Haven: Safe Zone game isn't finished (because we haven't seen some of the '*'-marked encounters).  However, it's a very busy scenario and we've already spent 2 sessions on this game; I decided to call it.

So, let's see.  The rioting mob is well and truly dispersed and running for their lives.  There are still zombies on the board, but some of them are chasing Dalton through the woods and others are attracted to the fleeing refugees.  Of the few that are actively attacking the base, none really have any chance of breaking in.  The fence is sagging a bit at 2 points, but still has some way to go before being breached.

I'd say that overall there are no credible threats remaining on the board.  Most of the troops and all of the civilians have survived (I don't know if we'll see Dalton again and Van Damme apparently plans to just keep on driving), so I'm ruling this a successful defence of the camp!

We didn't roll for REP advancement on the day, since time was too short and we had to pack up.  That'll have to wait for another occasion.