Lat weekend I played a small game of Full Thrust with my eldest son, primarily so that we could try out my Romulan fleet and see how the cloaking devices worked.  I took an amended version of the same scenario to the last night at the games club; that will be reported in due course.  In the meantime, here's how the tester went. 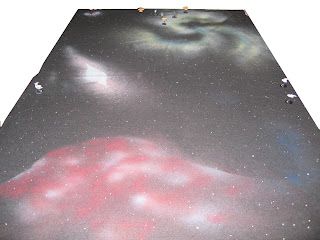 3 Ferengi warships are escorting a small merchant convoy through a dangerous region of space.  Their goal is for as many of the freighters as possible to escape (by reaching an edge in the furthest 1/3 of the board).

3 Romulan warships have just appeared (they can setup on any table edge in "their half" of the board) and are determined to stop the convoy.  Let battle commence.

How did it play? 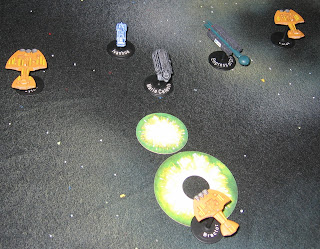 In the very first turn, the Romulan ships fired a couple of plasma torpedoes at the convoy and then cloaked [scenario adjustment needed: start the 2 sides a little further apart!].  Many ships fired on the smaller torpedo and it was successfully dispersed.  However, the larger weapon detonated with full force, inflicting minor damage to the destroyer Bractor and crushing the medium freighter Marie Celeste. 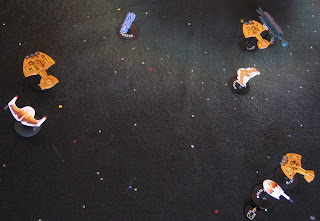 Nothing much happened for another turn, as the Romulans were hidden.  The remaining ships in the convoy continued to accelerate in their attempt to reach safety, but that was about all.

Then, the Romulan ships uncloaked and, sadly for them, each was virtually on top of their opposite number in the Ferengi fleet.  The surprised captain of the heavy cruiser Krayton immediately opened fire, with devastating results.  The Romulan cruiser Dragon was hit in the engines and, just as bad, lost her torpedo launcher, while the light cruiser Decurion took hits to engine and cloaking device.  Ouch!

In return, the best the attackers could do was to inflict minor damage on the large merchantman Empress of Orion and to cripple the light freighter Ivanhoe [she lost 3 of her 4 holds.  Oddly, all of these were determined to be carrying personal grooming equipment - I guess those Ferengi really love their ear-lobe polish!  Ivanhoe also suffered a non-critical hit, which came out as "make it up yourself".  I decided that her robotic loading system had malfunctioned and was busy unloading the contents of the 4th cargo hold - desk lamps - into space].

To add insult to injury, the Bractor then gutted her opposite number - the Lorica - leaving the Romulan destroyer just a drifting, lifeless hulk. 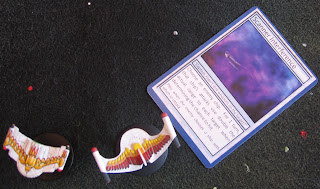 Things just continued to get worse for the Romulans.  The next turn, the damaged Dragon attempted to fire on a merchantman, only to discover that it couldn't lock its phasers on target due to scanner damage.  At least the cruiser's damage control parties had managed to repair the plasma torpedo launcher... 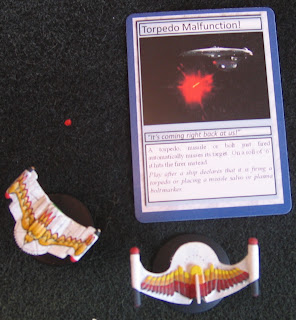 ...or so they thought.  However, when the Dragon attempted to fire another torpedo, the weapon malfunctioned and flew off in completely the wrong direction. 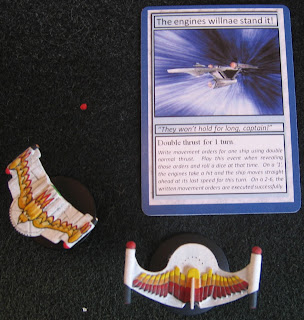 In desperation, the cruiser's captain ordered his chief engineer to push the damaged engines to the limit.  This gave him just enough thrust to turn round... 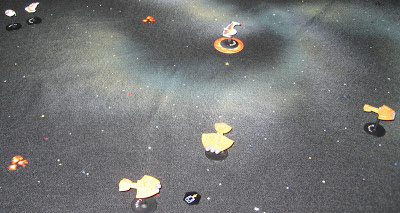 ...and come straight into the sights of 2 Ferengi warships at close range.  The Romulan flagship didn't even manage to shoot before she was torn to shreds by fire from the Krayton and the Bractor.

The cloaking device and the torpedo use up a lot of the mass in these Romulan ship designs.  That means they really cannot go head-to-head with an enemy warship of about the same size; they just don't have the same number of phasers and the like.  Instead, they must rely on hidden movement to position themselves where they can shoot without much return fire.  That's not what happened here!

[scenario adjustment - in hindsight, the convoy escorts should have had less firepower.  Perhaps 3/4 or 2/3 of the points value of the attackers rather than parity with them.] 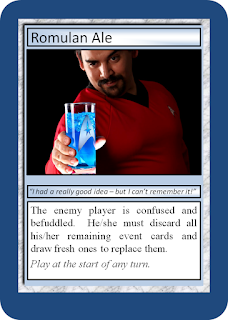 The really sad thing is that the attackers even had a Romulan Ale event card.  My son chose not to use this, in case it gave me new cards that were more useful than those I held, but this wasn't likely.  When fighting against Romulans, is any card more useful than a Torpedo Malfunction?!

[Update: we ran this scenario again, with minor differences.  Will it turn out any differently?  See here: http://colgar6.blogspot.com/2013/07/full-thrust-klingon-honour.html]