HOTT: The Tower in the Wastelands

So, we're playing Hordes of the Things this week at the games club.  As usual, I'm providing all the forces and the terrain, which gives me the right to decide exactly how to set up the game.

When we last saw them, my Goblin army and my other 'evil' army, The Cabal of the Black Hand, had both been roundly defeated by the forces of good.  Now they are both combing the wastelands, looking for a new base from which to plot their nefarious schemes!

In the same area as the wandering armies is the Dark Tower, home to a very powerful hermit wizard.  Conveniently, the wizard has just died (probably caused by something he summoned) and thus the Dark Tower is vacant, protected only by whatever traps and enchantments he may have left there.  This would make an ideal base for any evil overlord, so all armies in the wastelands are heading straight for it as soon as the news reaches them. 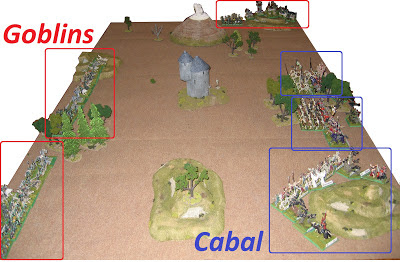 This will be another big-battle game, with 3 commands of 24AP on each side.  Special rules as follows:
As can be seen from the picture above, the Goblins spread their forces along their own baseline and their extreme left flank.  In contrast, the 3 commands of the Cabal army were tightly packed (and in some very unusual formations as well!). 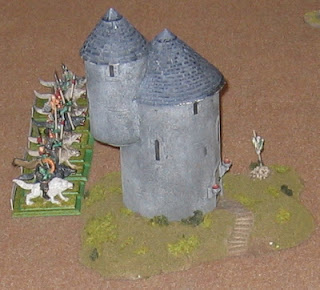 In their very first turn, the masses of Goblins surged forward.  Their rider general and his bodyguard reached the Dark Tower, defeated the protections and raised their standard from the highest point! 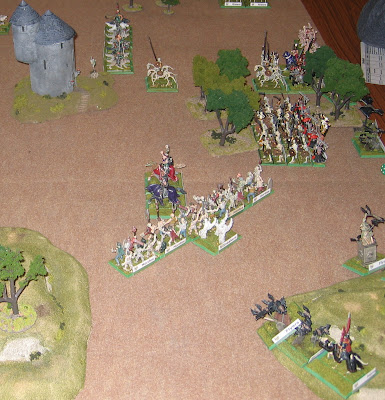 As the goblin cavalry swept on past the tower, the Cabal's response was disjointed.  Two necromancers rode out from the central command so that they could cast black magics (ineffectually) on a far-off troll.  This had a couple of consequences: firstly it used up most of that command's PIPs and so nothing else in the centre could move.  Secondly, the pair of magicians were now obstructing the corner command, so its infantry couldn't move to where it desired. 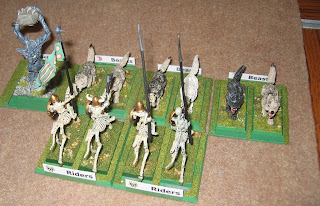 The wolves from the goblin flanking force and their troll raced forward, eager to catch the nearest Cabal command in the flank.  Low command rolls and an awkward deployment caused real problems for this undead brigade, but they did manage to defend with some skeletal horsemen as a stopgap. 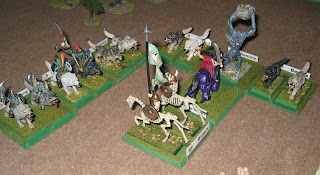 Soon, the goblin warlord from the central command joined in, bringing his wolf riders with him.  The Cabal's magician general was forced into melee in a desperate attempt to survive.  Yet, even though the situation looked hopeless, he somehow managed to find the occasional reinforcement, win the important dice rolls and otherwise hold on until the end of the game.  The goblins were furious at being frustrated in this way! 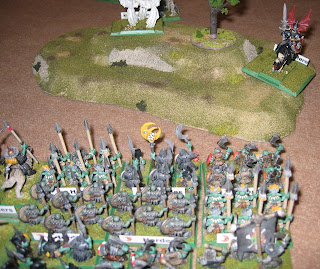 Separating himself from the tangled mess of deployment, the Cabal's only hero galloped to the top of the central ridge.  He reached the feature just in time to see the plains on the far side boil with approaching goblin hordes.  Anyone fancy a game of "King of the Hill"?  One undead lord against half the goblins in the world!

At the other end of the ridge, there was a troll.  It started to climb the hill, only to find itself face-to-face with some spirits.  I guess that trolls aren't imaginative enough to believe in ghosts; the resulting combat was predictably indecisive as neither side was able to hurt the other. 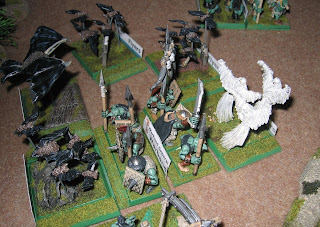 The wraiths drifted through the troll and carried on down the hill.  Near the foot, they encountered and attacked one of the goblin generals and his bodyguard.  Large swarms of giant bats joined in from all sides and the goblin chief was terrified into an early death!  The bats then flew off elsewhere.
The goblin bodyguard spent a number of turns trying to exact some revenge on the phantasms, but were completely unable to touch them. 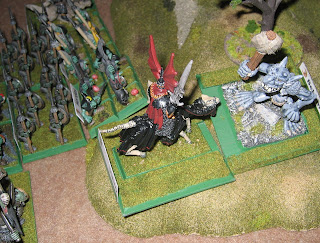 The troll, on the other hand, just shrugged as the spirits moved through it.  Instead, it carried on stalking the wight who was busy ploughing through hordes of goblins.  This time it was the behemoth that had a height advantage; he flattened the undead hero with one swing of his huge club.  Moral: if you're going to play "king of the hill" then stay on the top of the hill, not the lower slopes! 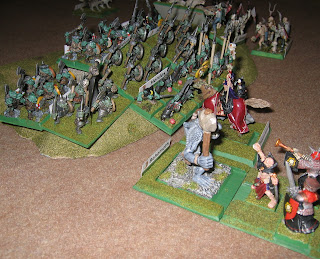 The goblin right wing then poured over the hill; only a few desperate magicians were close enough to try to hold them up! 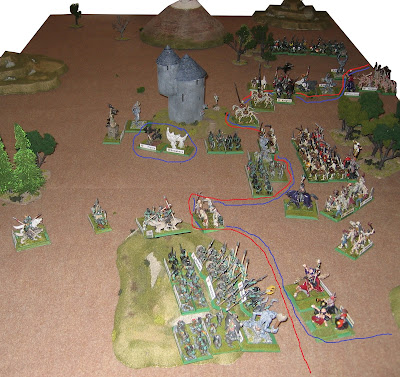 As the battle came to a close, the Cabal's forces looked increasingly beleaguered on all fronts.  Apart from a few outliers, they were being driven into an ever-decreasing perimeter.  As this happened, their remaining forces became more and more constricted - if they were in each others' way before then they were even more so now!  But... 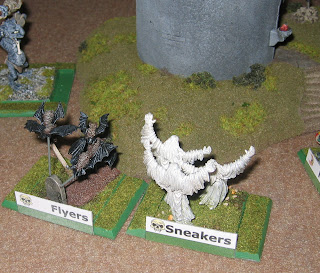 In the very last turn of the game, a base of ghosts (which could move through any enemies) and another of bats (which could move over enemies) slipped past the goblin stragglers and assaulted the Dark Tower.  This wasn't the first time in the game that the Cabal had attempted to take the stronghold, but all previous attempts had been by individual units and had failed miserably.  Everyone held their breath and predictably enough, on the last dice throw of the game, the sneaker captured the tower.  Victory to the Cabal!

Well, that was unexpected!
Man of the match (I use the word "man" in a figurative sense only!):