Just a quick update today, showing some of the models I've completed over the last month.  It's taken a while to get back into the swing of things after a long winter/spring where I didn't feel much like doing any painting.  But, I'm getting there... 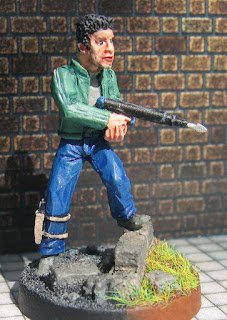 This model is from Studio Miniatures, where he's called "Miguel".  I decided that the name given by the manufacturer fitted very well, so I've kept that for my version.  He's armed with a strange weapon that looks like a spear gun to me, so I've added a small arrow head to the end of the barrel.  No doubt he's modeled after a character from some zombie film or game, but I don't recognise him.  I expect someone will tell me who he is, though :-) . 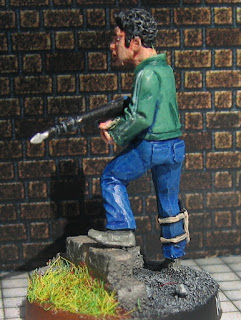 The original model had a very strange pose, as if peering into the ground.  I suppose this would make sense if he was leaning over a body of water to get a shot with his spear gun, but it didn't really work for me.  Instead, I've straightened him up and rested the left foot on a broken-down wall. Ann is a converted Wargames Factory Zombie Vixen.  She's dressed only in her night clothes, though I've added a large kitchen knife to her hand.  I imagine that Ann has woken up to find the apocalypse has started without her and has run out of the house in terror, stopping only to grab the nearest weapon! 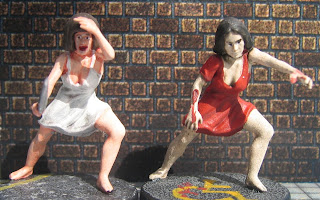 For comparison, here's Ann beside a zombie I made some time ago from the same kit.  There's nothing much you can do to change the basic body pose, but different arms, head and colour make them quite distinct.

As well as these survivors, a couple of fresh (?!) zombies made it to the end of the production line in the last week or so: 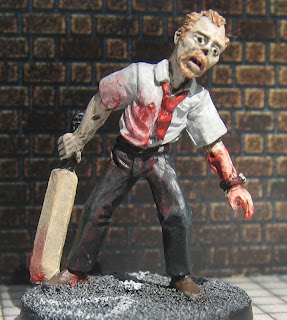 Look out, this one's armed!  He's dragging a cricket bat from one hand, though I'd say it wasn't certain that the zombie knows how to use it.  Still, you never know.   This is a limited edition model from Studio Miniatures; I received it as part of their plastic zombie kickstarter deal. 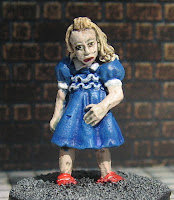 Finally, here's another Studio figure.  She's obviously dressed up in her party clothes and even though there's no blood and no bite marks on her, I find this model quite sinister.  There's something about child zombies that makes me shudder.  Even though a "representative" population should certainly have young victims, I don't plan on collecting more than a token few.