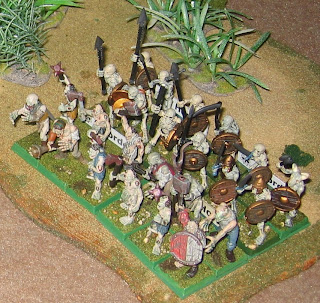 The air was hot and heavy as the Knights of Lyonesse trekked through the wilderness.  Flies buzzed around the horses' heads, pestering them mercilessly.  Even though it was the height of summer and the sun had been blazing down from a cloudless sky for weeks, the ground on this desolate plain felt spongy and damp.  Every so often, one of the men-at-arms or an animal would stumble and grunt as they caught a foot on a muddy tussock of rank-looking weeds.

"Remind me why we are here, please?"  The speaker was Henri, Duc D'Alençon - a short man, though broad and muscular.  He was the leader of the expedition and, all things considered, was quite calm.

"My lord, we are following the foul necromancers of the Cabal.  All the indications are that we will catch up with them very soon.  And this time, they won't give us the slip!" replied Sir Guy de Lusignac, his lieutenant.
"At least," Sir Guy thought to himself "I really hope so.  Then we can finish them off and return to where we can get a decent meal and a drink.  I can't stand much more of this!"

An hour later, just past noon, the lead cavalry stopped and gave a shout.  When their commanders galloped to the head of the column, they saw the reason why: a line of armoured, skeletal warriors stood facing them, completely immobile in the typical fashion of the true undead.  But there were so few of them?  Even the more experienced knights were grinning broadly - this shouldn't take long at all! 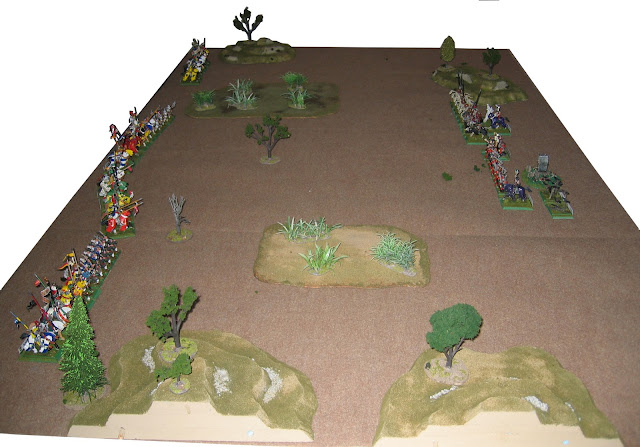 This is, on the face of it, a straightforward battle using the Hordes of the Things rules.  The Knights of Lyonesse are attacking, whilst the undead army of the Cabal of the Black Hand are defending.  We used 48AP on either side, divided into 2 commands of 24AP each, though there's no reason why the same scenario couldn't be played with more or fewer troops.  So, what's the catch?

If you are regular readers then you'll know that I often like to shake things up a bit!  So, here are some scenario-specific rules: 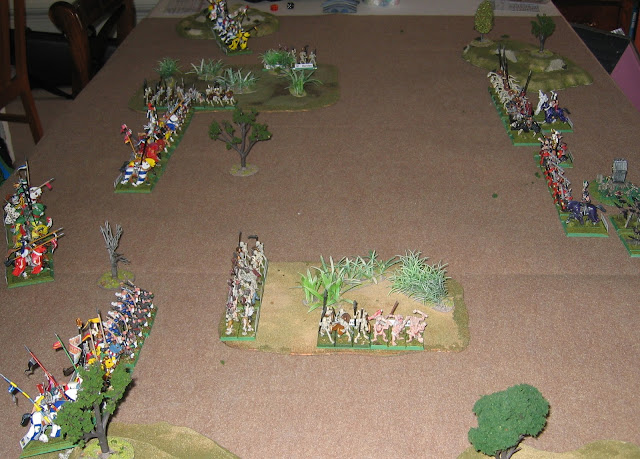 The knights advance cautiously, trying to stick to the drier patches of ground.  As they passed some of the softer parts of the bog, the ground heaved and clods of dirt were thrown aside as numerous long-dead soldiers rose from their mass graves!  [The knights started with exceptionally poor PiP rolls, whilst the Cabal had very high rolls.  Indeed, the southern command of the knights didn't roll higher than a '3' for command points - and that only occasionally - until the game was all but over!] 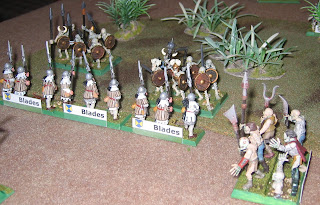 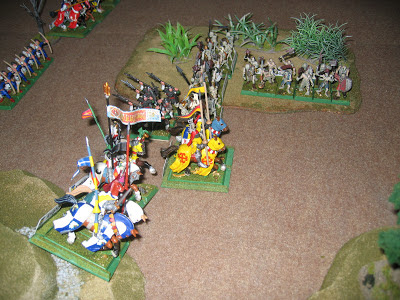 ...and in the south, halberdiers fought the nearest skeletons whilst lines of archers slew many more of the risen undead.

So far, so good.  The cavalry in the centre advanced, trying to avoid the messy swamps and come to grips with the evil magicians around the shrine.  A magical assault caused their first casualty, however.  Two necromancers teamed up to target the Red Knight: one wizard used phantom marsh lights to distract the hero whilst the other entrapped him with sticky stuff! 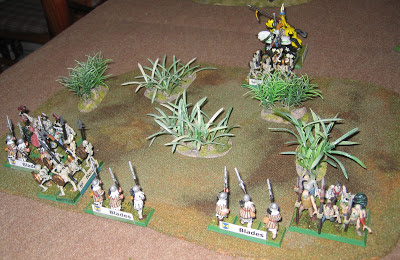 In the northern swamp, the foot soldiers found it relatively easy to destroy each undead horde as the corpses rose from the waterlogged soil.  However, it was whack-a-mole: each time they dispatched a horde, another would just pop up to replace it, often behind them.  Worse, one of the stands of knights from the flanking force was attacked by a band of skeletal warriors.  The proud nobles couldn't refuse a fight and found themselves unable to disengage from the constant supply of enemies.

The archers were doing a good job of clearing the southern marsh.  Anything which appeared within their range was quickly dispatched back to its grave.  Even so, some of the passing knights were sucked into fighting the undead hordes.  Their impetuous nature drew them further and further into the bog, away from the protection of their friends, until one stand was overwhelmed and dragged down into the muddy pools [not a good place to be for impetuous troop types!]. 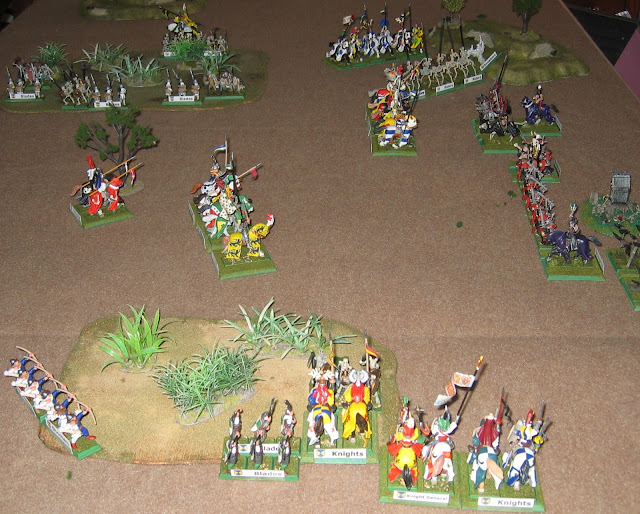 Despite all the delays, magical and otherwise, the faster-moving northern knights were first to reach the main lines of the undead army. 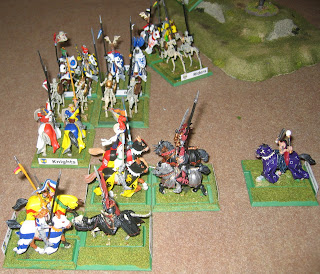 The outnumbered forces of the Cabal tried desperately to hold on as the fighting quickly turned into a confused melee.  Troops from both sides fell, but overall the knights had the upper hand. 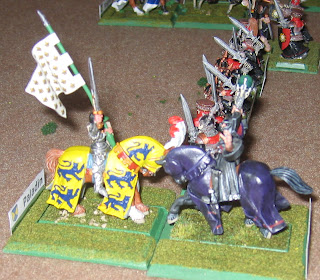 Not wanting to be left out of the fighting, Saint Florence (the paladin) charged the magician at the southern end of the undead line.  He had plenty of time to see her coming and her aura of faith meant little to him here, so close to the unholy shrine.  His lightning bolt hit squarely on her armour, knocking the damsel off her horse and leaving her flapping and tasered on the dirt.

Even though his command was beating back their enemies, Sir Guy couldn't shake a feeling of trepidation and impending doom.  It was almost as if something terrible was creeping up behind him!  A pair of brave young squires saw the marsh vapours start to coalesce behind their general and, without thought for their own safety, they charged the forming apparitions [sneakers].  The ghosts couldn't stand against such brash recklessness; they fled off the field like a sudden breeze.


Up to this point, the casualties on each side had been fairly even.  However, now the forces of Lyonesse started to get decent command rolls and the Cabal didn't... 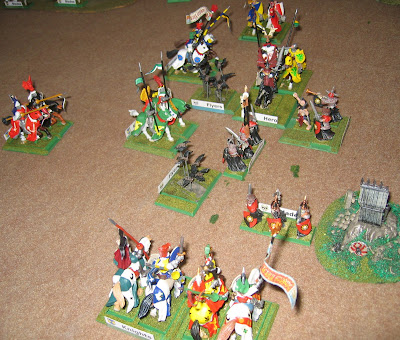 Suddenly, there were knights all over the defender's core forces.  First, one of the magicians fell to the Duc D'Alençon's skilful lance.  Then, the Cabal's heavy infantry - the Grave Guard - started to take losses.  The dark vampire knights were also wiped out by the determined chivalry of Lyonesse. Evil bat swarms hovered overhead, watching the battle unfold below them - but they were too indecisive to make any contribution [too few PiPs to move them!]. The evil shrine looked under real threat as the Cabal's lines contracted! 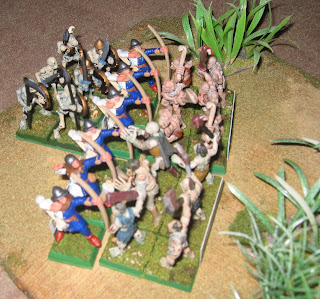 A last ditch piece of necromancy from the Cabal saw skeletons, ghouls and zombies arise on all sides of the archers, who had advanced into the swamp in a belated attempt to help with the assault.  However, the stout yeomen could sense a victory; they laid about their enemies fiercely with clubs, daggers and rocks.  The undead hordes wilted and crumbled back into the marsh from which they had come. 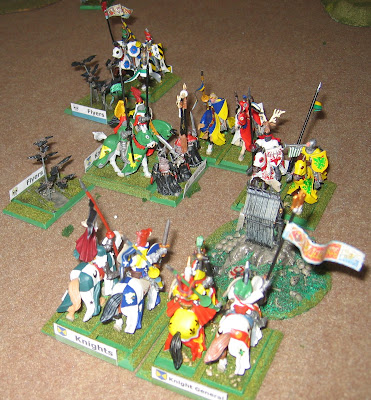 Then, quite suddenly, it was all over.  Both undead commands passed the demoralisation threshold and collapsed.  The remaining warlocks fled, leaving a few of their troops (and bats!) in a vain attempt to distract the victorious knights.  Mind you, it then took the forces of Lyonesse a considerable time to counter all the evil protections on the shrine in order to finally pull it down...

Well, that was interesting!  The "hordes from the swamp" idea worked well and seemed reasonably well balanced.  If anything, the value of the infantry and cavalry who were distracted by the ever-returning hordes was slightly greater than that of the hordes themselves, but against this the forces of darkness used a lot of command points to keep that threat going.  Mind you, I think that you'd need to be careful with the way the terrain was set up; it would be all too easy to create a very unbalanced game.

The same idea could extend to some other types of horde armies.  I could easily imagine masses of goblins boiling out of broken ground riddled with tunnels and holes.