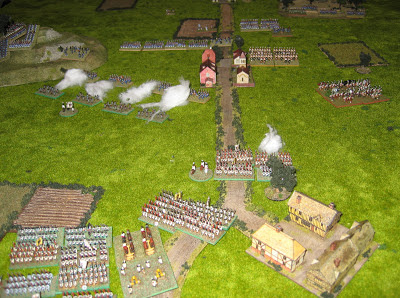 Last weekend, we got out my 6mm Napoleonic forces and played another game of Black Powder with them.  Now my armies for this period are something of a mixture of bits and pieces, but I can put together a fairly decent-sized Austrian force (especially if I overlook the odd base of infantry with Hungarian uniforms in an otherwise German regiment!).  Against this, I can field a smaller force composed mostly of French, but with some Bavarian allies.  I needed to come up with a scenario where the victory conditions allowed the smaller force to have a reasonable chance, so a simple pitched battle wouldn't work.

Austrian forces are advancing in strength, trying to find a weak point in an over-stretched French corps.  A division led by General Wulfe has been ordered to clear the approaches to the town of Bad Wörgl; if this succeeds then the French invasion will be in jeopardy.  Hastily, a scratch group of French and Bavarian allies under General Le Beaux has been sent to intercept them.  Can the allies delay the whitecoats, or will they be overrun by the superior numbers in Wulfe's division?

So, here's how it works.  We'll play along the length of the table - there's a road from one end to the other.  Both sides will set their forces up in their marching positions, one at each end, just off the board.  Because they have fewer troops, the French are permitted 3 clear moves before the Austrians arrive - this should give them time to choose a defensive position and/or shake themselves out of march columns into battle formations.  Victory will be judged on how much the French can slow down the Austrians (somewhat vague, but good enough for a friendly game).

For leadership, we'll randomise the values.  Each French or Bavarian leader will have a leadership of 6 + 1d4 (i.e. from 7-10), whereas the Austrians will be penalised slightly by having values of 6 + 1d3.  Also, the French merit system allows them to swap leadership values between generals at the start of the game.  However, each Austrian or Bavarian leader must take the roll he gets.

Looking at this in hindsight, the Austrians didn't outnumber the French by as large a margin as I thought at the time, having an advantage of 10 regiments to 8.  Also, the French had more artillery batteries.  It's painfully obvious that I rolled the lowest possible leadership (7) for every Austrian general, whereas the French and Bavarians rolled above average.  Oh, well... 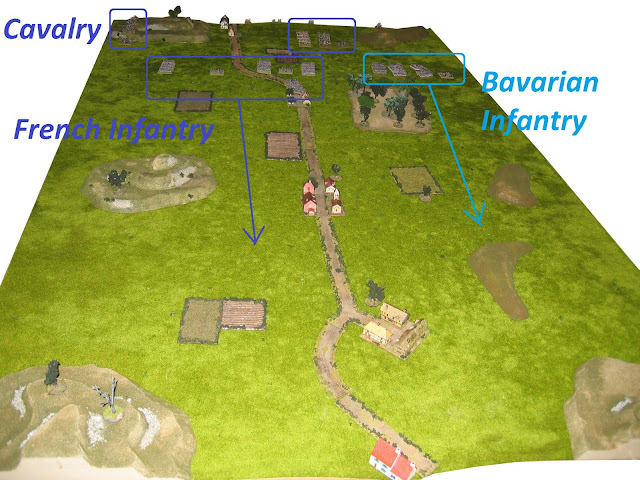 The French made use of their 3 free turns to advance their infantry down the centre, throwing 1 regiment out ahead as a skirmish screen.  On the right, the Bavarians made excellent progress and managed to site an artillery battery on Little Round Top.  However, all was not perfect as the 5th Hussars on the left refused all orders to move forward, citing the need to have a proper breakfast before saddling up! 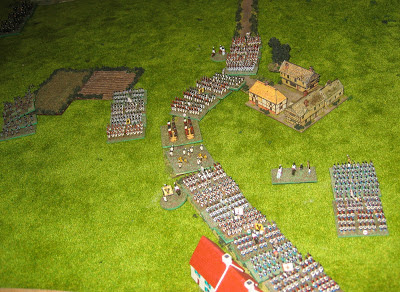 Finally, the Austrians began to arrive.  The road was clogged with their main brigade, closely followed by the reserve brigade, whilst elements of the light brigade scouted on both flanks. 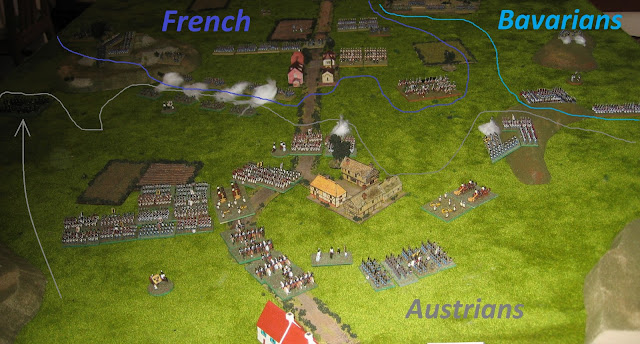 Battle was joined soon after, as cavalry on both sides forced the opposing infantry to halt and form squares.  Left of centre, a vicious but private little war erupted between the Jaegers and the French skirmishers.  On the far left, Austrian Uhlans attempted a wide flanking manoeuvre. 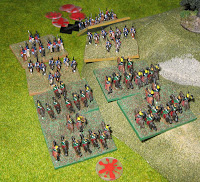 The French reacted to the flank threat; their reluctant 5th Hussars were ordered to charge the Austrian cavalry.  However, in a thunderous counter-charge, the Uhlans obliterated the French regiment for virtually no loss to themselves.  The victorious Austrian regiment then carried on towards the French rear, causing consternation for General Le Beaux.

However, a nearby French line regiment managed to catch the Uhlans in the flank and poured volley after volley of musket fire into them.  Surprisingly, the Austrian cavalry didn't suffer many casualties, but they did become disordered several turns in a row and were thus unable to move away to safety.  The Carabiniers waited in the distance, just in case the Uhlans made a break for it, but they weren't needed.  Eventually, the Austrian light brigade broke (lost enough units in other parts of the battle) and the Uhlans then retired off the field. 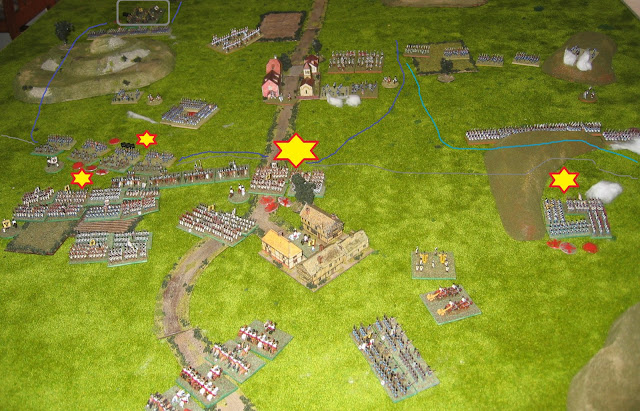 Battle was joined all along the line now. 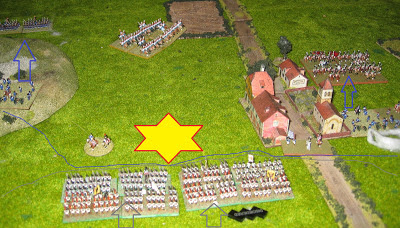 Finally, the Austrians untangled themselves enough for the 11th and 47th regiments to unleash a massive charge against the remaining French infantry in the centre left.  The assault columns rolled over the defending line with barely a scratch and in the ensuing collapse, half of the French artillery decided to flee as well. 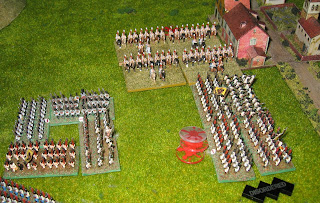 Only the Carabiniers were available to plug this huge hole in the French deployment.  The 11th regiment promptly (and correctly) formed square in the presence of the French heavy cavalry, but the 47th blundered and turned to attack the Bavarians to the right.  The Carabiniers couldn't believe their luck as they charged the errant Austrian infantry in the flank - but even though they scored a very large number of hits, the 47th proved remarkably resilient and survived the attack (just!).  There was nothing the French cavalry could do except withdraw in disgust, as other Austrian regiments nearby would have overwhelmed them otherwise. 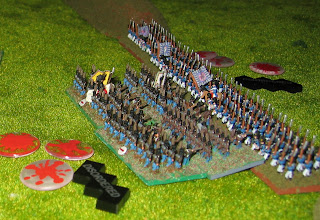 Finally, on the right flank the 13th Grenze formed assault column and charged the 7th Bavarian line regiment, who had come close to encircling the Austrian artillery.  The fight was short but extremely bloody, resulting in the Bavarian unit routed and the Austrian unit devastated. 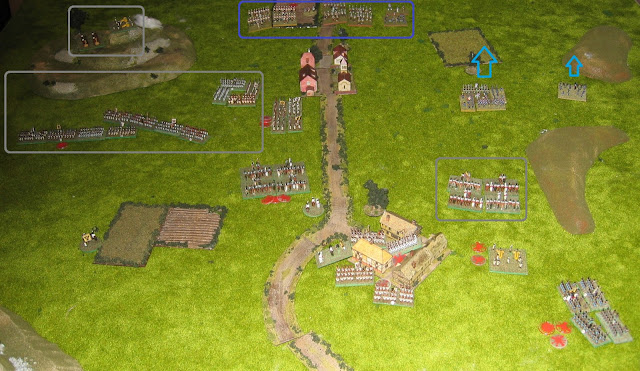 Both the French and Bavarian infantry brigades had now collapsed, so the remainder of the French cavalry brigade withdrew in good order, leaving the field covered in shattered Austrian units.  The Austrian Reserve brigade still had plenty of infantry in good order, but they wouldn't be able to catch the enemy horsemen (though the last remaining Bavarian square, pinned by Austrian dragoons, looked very vulnerable).

We tried to set up a game here that was a bit more interesting than the traditional "line them up along the long edges and attack" scenario.  In this, I think we succeeded quite well.  As commander of the Austrians, I was continually frustrated by General Schwartztodt's inability to move his troops along the road - von Eugen's Reserve brigade eventually just went round them to the left.  The attack was certainly blunted, as none of General Wulfe's troops got anywhere near the French baseline.

For the French, the early plan had been to garrison the wood and village in the centre of the table.  Had they done this, I suspect it would have been very difficult to shift them.  However, there were no Austrians present when they arrived at this location; rather than sit down to wait, the French decided to continue their advance.  When they eventually made contact, it was in the open and the French and Bavarian units were somewhat separated, so they lost the advantage of a prepared defence.

Finally, Hussars on both sides were useless.  The Austrian 3rd Hussars were shot to bits by Bavarian artillery and infantry, like fish in a barrel.  On the other flank, the French 5th Hussars were reluctant to obey orders.  When they finally decided to charge, the Uhlans made mincemeat of them.