A little while ago, I played a test game with my son, where a small Romulan squadron attacked a Ferengi convoy: http://colgar6.blogspot.com/2013/06/full-thrust-never-trust-ferengi.html .  I took an almost-identical scenario to the games club last Tuesday, where 2 novice players took on the role of Klingon cruiser captains tasked with guarding an important convoy.

Again, the convoy was intercepted by Romulan warships, in this case the battlecruiser Consul and the light cruiser Decurion.  This time the scenario was slightly different in 2 ways: the Romulans set up a bit further away from the convoy and there were a couple of small patches of asteroids on the board. 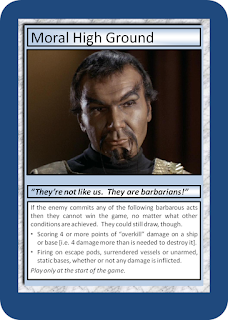 Before the first move had even taken place, the Romulan commander played a Moral High Ground card.  This meant that if the Klingons obliterated any enemy ship without giving the crew a chance to reach escape pods then the best they could achieve would be a draw.  Clearly they'd have to be careful not to overkill the Romulan ships! 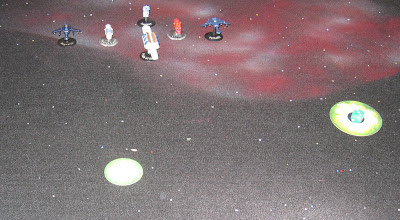 On start of play, the Romulan ships immediately fired plasma torpedoes at their maximum range (a little one from the Decurion and a huge bolt from the Consul) and then cloaked.  The torpedoes fell far short of the convoy's position, but were launched just in case the Klingon cruisers had decided to accelerate rather harder than the sluggish merchantmen.

Since the enemy's position wasn't known, the convoy could do nothing but start to scatter.  We did debate whether bunching up might be better, so as to concentrate point defence fire on the inevitable torpedoes.  However, if we failed to shoot down the missiles then that would have caused all the ships in the fleet to suffer damage.

As it was, both of the Romulan ships uncloaked as soon as they had reloaded their torpedoes and fired at point blank range into the midst of the gaggle of civilian vessels.  There was nothing the horrified escort ships could do as 3 of their charges blew up immediately.  Only the huge bulk freighter Pride of the Orient survived, partly because she was targeted by the smaller torpedo and partly because of her sheer size - it would take a lot of damage to slow down such a massive vessel!

The Klingons did get some retaliation, though.  Valhalla was ignored by the battlecruiser Consul (which was concentrating on hitting freighters), so she fired on the larger ship at extremely close range.  The Romulan was not badly damaged, but she did take an engine hit that would soon prove to be very awkward.  Additionally, the engineer's secret still was hit; there would be no more Romulan ale this mission!

On the other flank, Ragnarok took on the smaller Romulan cruiser and did enough damage to scare her captain! 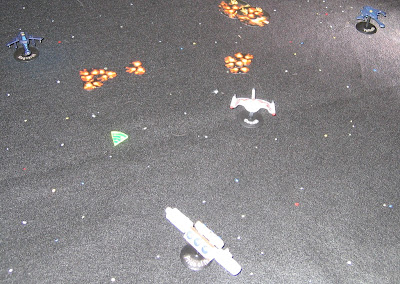 Immediately the Decurion cloaked and vanished; it looked as if she would be able to escape without any further damage.  The Consul decided to chase down the last freighter, though the engine hit limited the distance she could put between herself and the Klingon cruisers. 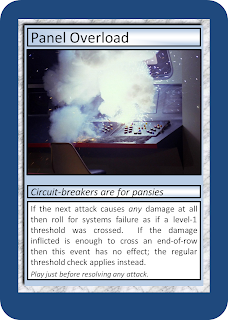 Valhalla was on a roll now.  She played a Panel Overload card before firing on the Consul again.  As it happened, enough damage was done to cause a threshold check anyway, even without the help of the card.  With a flurry of high die rolls, every system on the Romulan ship (apart from 2 phasers, life support and the bridge) was knocked out.  That's right: engines (2nd hit, so now completely inoperable), fire control, cloaking device, hyperdrive, screens, torpedo, warp core critical...everything!  The Consul staggered in space as great arcs of electricity rampaged through all the open spaces in the ship, destroying machinery and throwing her crew about like rag dolls.  She continued coasting through space, but without any ability to fire or control her movement. 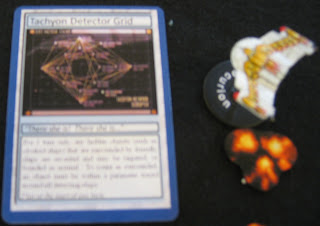 Next turn, in a staggering display of scientific brilliance, the chief engineer on the Ragnarok coordinated the sensors on both Klingon cruisers and the Pride of the Orient to search for stray energy emissions from the cloaked Romulan light cruiser.  The Decurion was indeed within the triangle formed by the 3 ships!

"I can see you..." whispered the Ragnarok's captain to himself as he observed the damaged Romulan trying to slip away.  "Tactical - fire on my command.  Disruptors will be enough to finish her off, I think.  BAKH!"

The bolts tore through the surprised target, though at least some of the crew had time to reach life pods before the Decurion broke apart (the volley achieved precisely the number of hits needed to destroy the target, so no massive overkill there). 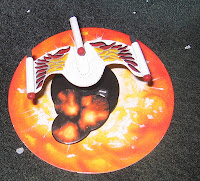 Both Klingon cruisers now turned to chase the damaged and out-of-control Consul.  They hoped to run her down, board and capture the Romulan battlecruiser.  That would have been a prize indeed, if it could be accomplished!  However, long before they could reach her, the Consul's warp core went critical and she blew up spectacularly (not helped by her captain desperately trying to repair a fire control system rather than the warp core breach, just so that he could attempt to kill the last freighter and finish the mission)!

Well, that was an all-or-nothing game for the ships involved!  Status:

As in the tester game mentioned at the start of this article, the Romulans concentrated exclusively on killing the freighters.  This did allow the defending warships free rein to fire on them and in the end this cost the attackers both of their ships.  I think the convoy would have to be very important for such an exchange rate to be worthwhile, but the scenario's victory conditions are a bit vague on exactly what has to be achieved to "win".

Tactically, it's obvious that area effect weapons such as plasma torpedoes are devastating against closely-packed freighters.  Even though the merchantmen started to scatter, their low thrust ratings meant that they hadn't moved far apart from each other and were easy targets when the Romulans fired their second salvo.  Maybe we should have bunched up and relied on the warship's defensive fire after all?