I had intended to post something a few days ago, in order to keep to my rough schedule of 2 updates per week.  However, a combination of things has delayed this.  Firstly, I had a cold and was feeling a bit washed out as a consequence.  Secondly, our computer was playing up and would shut itself down at seemingly random intervals.  This has been traced to an intermittent fault in the keyboard, so trying to type anything was interesting! 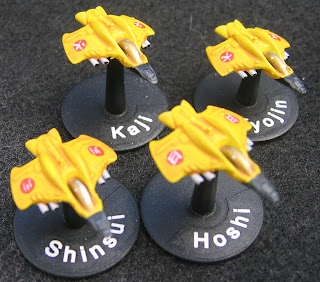 Previously, I showed you my first 2 sets of painted fighters for "5150 Fighter Command": here .  Later on, I bought some "Space Battleship Yamato" plastic kits and asked for help to decide how to paint my 3rd faction of fighters: here.

Well, it should be obvious from the pictures that I decided to go with the yellow and black scheme for these models!  These are light interceptors from the 5th Chutai of the Frontier Pacification Force, belonging to the Empire of 1000 Suns. 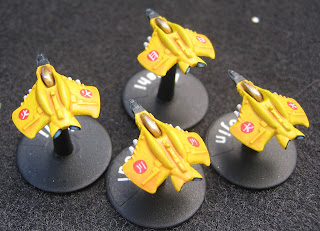 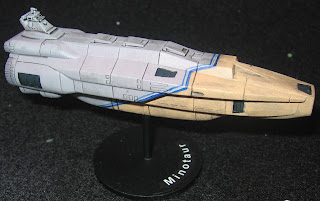 I've also completed one of my "Space Battleship Yamato" plastic kits.  This is definitely my favourite vessel of the ones I have, so I painted it first.  The colour scheme is loosely based on a real-life airline's livery (from memory, it was some Chinese freight outfit?).  Anyway, here is the spaceship "Minotaur"! 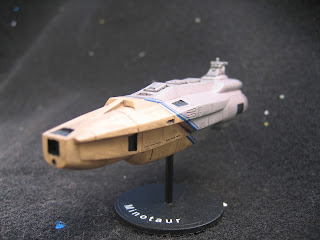 I haven't yet decided whether to use here as a capital ship in "Fighter Command" (at around 5"/12.5cm long, she's out-of-scale with the fighters, but then so is pretty much any practical model).  Alternatively, I could use Minotaur in Full Thrust - she's got "bulk freighter" written all over her, I think.  Perhaps I'll use the ship in both games. 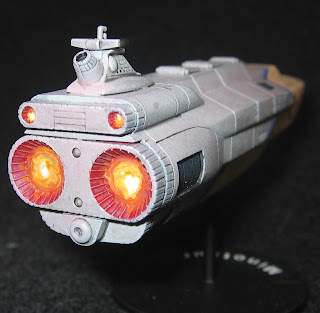 That's all, folks!  Hopefully I'll have something a bit more interesting next time...