2 weeks ago, I showed my starter Viking warband and bemoaned how long it was taking me to paint up their opposition.  Well, I was so inspired by the positive responses that I have not only finished the starter Scots force who will face the Vikings, but I've also played my first game of Saga!  You'll have to wait a little for the game report though; this article will be used to introduce my second warband. 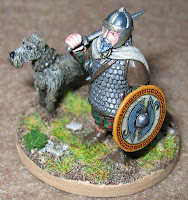 Macbheatha is the leader of my Scots force.  He's accompanied by his faithful hound "Bran".  Unusually, he has scale armour instead of chainmail. 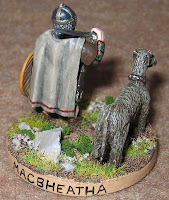 Note that the Scots in my collection can be distinguished from my Vikings in several ways: 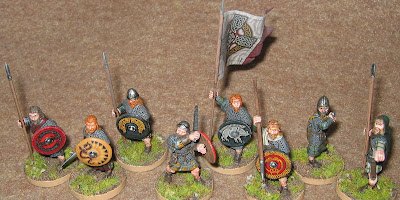 This warband has 8 thanes in it.  Unlike the Vikings they're all just "vanilla" hearthguard, though usefully  they all count as spearmen for the purposes of the Saga battleboard.

I've used decals from Little Big Men for both the shields and the flags on all my figures.  Saga didn't originally have rules for standard bearers, but I'm sure they've been published as an update somewhere.  At least I have the option of using these rules if I desire. 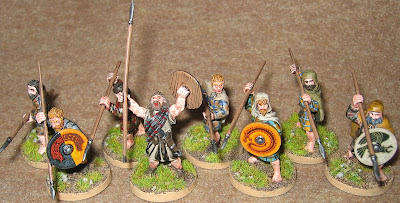 Most of my Scots warriors have spears.  These are rather longer than those preferred by many Dark Age fighters, but they hint at the "pike"-armed schiltrons of later centuries.

I'm well aware that the modern notion of tartan is only a couple of centuries old (and highly contrived, at that).  However, it suits the narrative for these guys to wear patterned cloth, though whether the patterns would have been this form in the Dark Ages is anyone's guess.  Anyway, what I've painted isn't technically tartan (there aren't enough different colours), so there!

Like the thanes, my soer-chele (warriors) have a banner.  They also have a horn blower, though I'm not aware of any special rules in Saga for such equipment.  As far as I'm concerned, he's just a regular warrior - but slightly louder than average, I suppose. 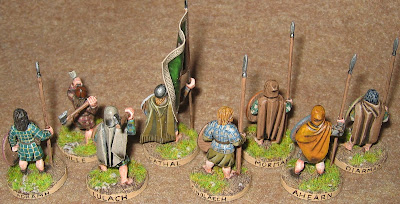 Initially, I tried to paint tartan (sorry, patterned cloth!) on some of the cloaks as well as the tunics.  I soon found that the non-rectangular shape of most of these made the results come out very strangely, so they were quickly covered up with solid colours.  It's a pity, but I just couldn't do it to my satisfaction.

Once I finally got round to it, I've enjoyed painting these models.  Now my mind is full of plans for expansion: a small unit of cavalry and some skirmishers, perhaps?  What about one of the heroes of the age?  Or a bard?  I really fancy getting a group of monks as well, especially some armed brothers who've just had enough of the Vikings!  So many things I could do - and that's even before having played with them!