We often use blogs to show off our best work - I suppose that's to be expected - but rarely do we exhibit our mistakes.  Here's an example of something that has gone very wrong...

For a large part of Spring this year, I used my evenings to construct these buildings.  They're from Stoelzel's Structures and would have formed part of a car dealership, along with the garage that I haven't yet printed out.  On the left is the showroom (the shell only; I hadn't got as far as fittings & furniture).  The other, less complete, model is the carwash.

Now, I'd intended that these models would be built to a very high standard.  They'd have opening doors, transparencies for windows, no exposed foamcore edges and so on.  I spent a lot of effort to get to the stage you can see here.

I had been making the dealership in my conservatory, where there was a great deal more space than on my overloaded workbench.  However, something distracted me for a few days and I didn't make any progress on the builds.  This coincided precisely with the start of one of the hottest summers on record for this part of the world.

The conservatory on my house is south facing (northern hemisphere) and it can get very hot if not opened up during the day.  Indeed, some years ago we were out for the entire day; when we returned we recorded a temperature of 50 degrees Centigrade! 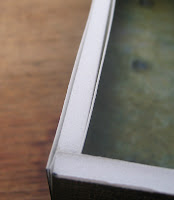 When I next looked at my models, I was horrified to discover that the foamcore had started to delaminate.  This isn't a case of my printed paper sheets coming unstuck, but rather the outer card of the foamcore coming away from the inner foam.  Oh, bother! 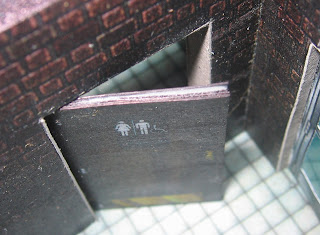 At this point, I took a deep breath and thought about what I might do to fix the problem.  My first attempt to stick the card back to the foam (using white PVA/Elmer's) didn't really work; the glue wouldn't adhere to the inner core. 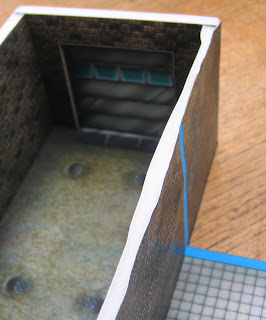 So, I tried again with a contact adhesive.  Initially, I thought this had been successful, but it soon became obvious that the glue had melted the inner core.  Even though I'd spread it as thinly as I could, the foam had collapsed and left a very uneven wall.

So there you have it - a sorry tale of woe!  It's been a couple of months now since this disaster occurred and I cannot figure out how to fix the models.  They're quite unusable as it stands, in my opinion.

It would probably be less effort to just start over rather than attempting to patch up all the damaged parts.  On the other hand, I put a lot of effort into these and I cannot bring myself to just chuck them in the rubbish bin.  Not quite yet, anyway...
Posted by Colgar6 at 20:28

Email ThisBlogThis!Share to TwitterShare to FacebookShare to Pinterest
Labels: Disaster