The Rules With No Name: High Noon

One of my favourite Westerns (indeed, one of my favourite movies) is "High Noon".  In this, Gary Cooper won an Oscar for his portrayal of an about-to-retire marshal who is forced to confront a gang of 4 gunmen on his own, the leader of whom has sworn to kill him.

So, can I create a scenario for The Rules with No Name which captures some of the tension and leads to an epic finale?  Let's see...

So, the numbers on each side are easy enough: 1 marshal against 4 gunslingers.  However, it's going to be tricky to balance this.  Also note that I've had to alter the appearance and names of the characters, if only to fit the models I have in my collection:

We ran the game a couple of times to see how this scenario would work.  Here's what happened:

Straight away, Rico (the drunk) activated.  He failed his "drunk dice" and passed out before anyone else had even moved.  For most of the rest of the game, Rico lay unconscious in the dust.  1 down, 3 to go! 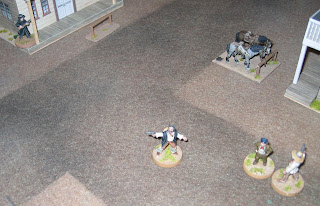 The remaining bandits spread out as they ran up the road.  A passing loafer wandered out of the saloon and staggered drunkenly across the road, but this didn't inconvenience the gang at all.  Then, the marshal appeared across the street... 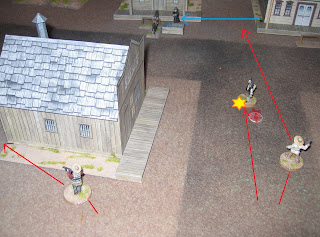 ...and shot Tuco, who was in the lead.  The villain took a serious chest wound; he spent quite a while getting back to his feet while his 2 associates scattered and the marshal ran for cover. 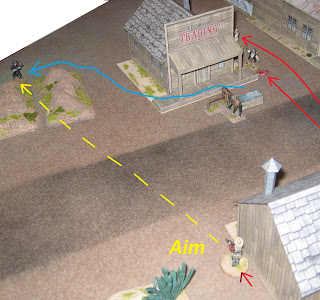 As the bandits advanced, the marshal retreated, afraid of being outflanked.  He kept moving in order to disrupt the aim of the rifleman, Cesar, though this restricted the useful actions that he could take himself. 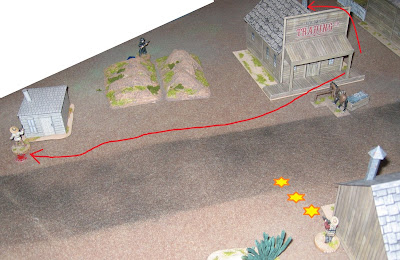 While Cesar kept the marshal's head down (mostly), Santiago ran along the road to the cabin.  He didn't manage this unscathed, though: the marshal managed to inflict a minor wound on him as the bandit ran past.  Meanwhile, Tuco crept round the back of the Trading Post. 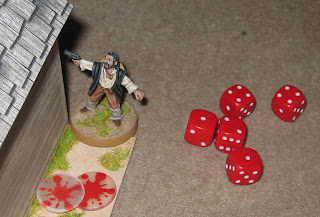 Despite his wound, Tuco managed to take an aimed shot at the marshal.  He rolled 5 dice for this and due to his Deadeye ability he would only need a 5 or 6 on any one of them to hit his target.  Of course, he missed... 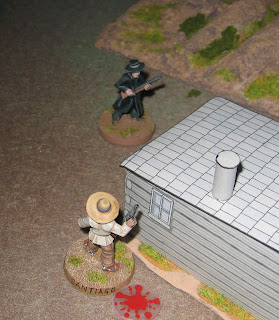 The near miss rattled the marshal, however.  When Santiago began aiming at him from the other side, he decided to use his once-per-game free action.  Rather than remain in what was now a somewhat exposed position, he chose to charge Santiago, intending to beat him up in hand-to-hand combat and relying on his superior class and Santiago's wound to give him the edge.

The marshal was about 8" away from the bandit, so he rolled 3d6 for his charge move - and came up with 6".  Oops!  Santiago then took his shot at close range and killed the marshal with a single bullet.  Game over! 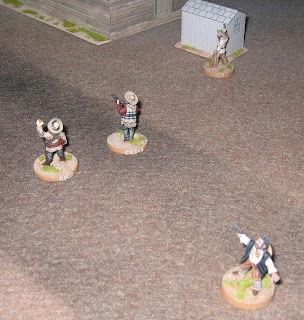 Once again, Rico (the drunk) activated first.  However, he immediately sobered up and therefore could act as normal for the rest of the game.  Since I was playing the marshal, this was bad news!

The minions ran up the street looking for the marshal, while Tuco was a bit slower. 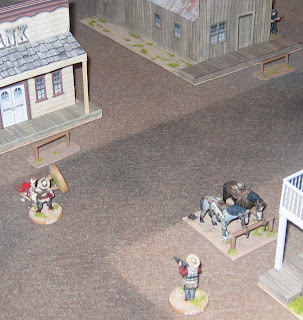 As Santiago reached the junction, the marshal stepped round the corner of the Dry Goods store, aimed and fired.  Santiago took a serious wound and fell to the ground. 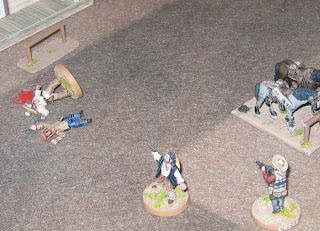 Rico ran up to his injured comrade, but the marshal then aimed at him and shot him dead.  So far, so good. 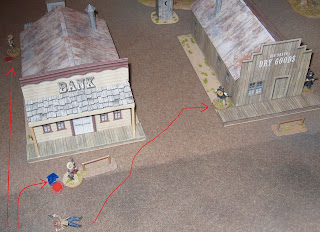 The injured Santiago pulled himself up and staggered round the side of the Bank, while Tuco attempted to flank the marshal.  Meanwhile, Cesar traded shots with the lawman from behind the limited cover of a hitching rail.  This eventually resulted in minor injuries or grazes to both of them. 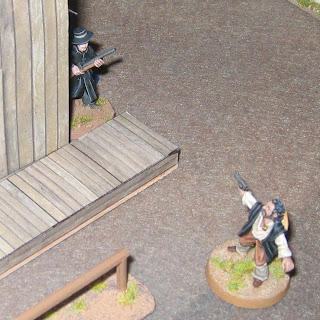 Tuco seized his chance when he was dealt 3 action cards in a single turn.  He leaped out into the street (1st action) and aimed at the marshal (2nd action).  Before he could use the 3rd one to shoot, the marshal used his once-per-game Desperate action to interrupt.  Quickly raising his revolver, the marshal fired once and shot the villain dead!  [note: we realised later that the marshal was Ducked Back at the time and therefore should have needed to spend an action recovering from this before being able to shoot.  That would have changed things somewhat!  Oops.] 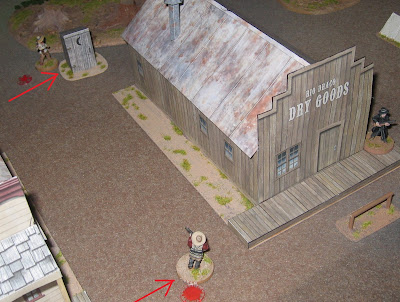 With his boss dead, Cesar decided to move off the street and seek more cover.  However, he hadn't gone very far when the marshal drew a full hand of 5 action cards (i.e. his own character card and all 4 of the Legend, Shootist, Gunman and Citizen cards).  Looks like Cesar is in trouble! 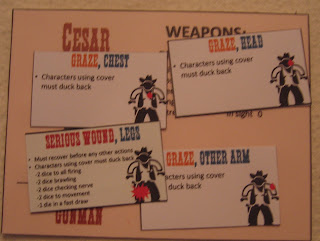 The marshal aimed and fired, aimed and fired, then fired again.  He expected to kill Cesar straight away and then to use the remaining actions to deal with the pesky Santiago (who was creeping up behind him).  However, an angel must have been watching over Cesar that day: although he took one serious wound, the rest of the shots were just grazes that didn't really inconvenience him. 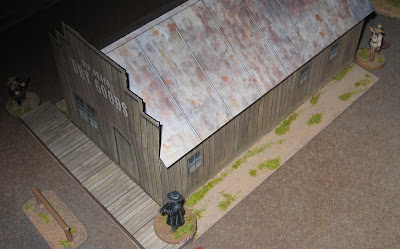 The injured Santiago then managed to catch the marshal from behind.  The bandit's lucky shot hit the lawman's gun arm, thus rendering him unable to use his weapon. 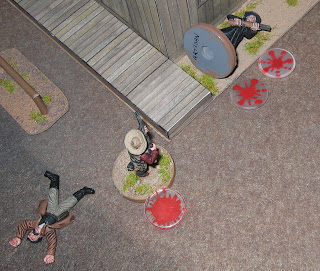 Seeing this, Cesar dragged himself round the corner and shot the marshal again.  Although he didn't kill him outright, he did hit him in the legs.  Since the marshal could neither shoot nor move any more, we called the game at this point; the 2 injured villains could have finished him off without difficulty (and playing it out would be more reminiscent of an 1980's 18-rated torture movie than of a classic Western...)

In hindsight, the marshal didn't really stand much of a chance in either game, I think.

The Familiarity special rule was fairly useless as there were too many lines of sight in my town.  Even if the marshal had gone out of sight round a corner, the best he might have achieved with this rule would be to move 2 sides around a building.  I was hoping that he'd be able to disengage completely and pop up somewhere else unexpected (thus forcing the killers to separate to search for him!).

The Desperate rule worked nicely, but didn't give the marshal enough of an edge on its own.

Perhaps the most obvious rebalancing change would be to alter the victory conditions, so that the marshal wins if Tuco is killed (rather than Tuco and all his gang).  This would make the bandits exercise some caution with their most powerful character and might allow the marshal to even the odds a bit before the final confrontation.  I think I'd also downgrade Tuco to shootist after all - and probably replace his Deadeye skill with something less combat-oriented.