A few months ago, I showed some of my builds from Wargames Factory's kit "Apocalypse Survivors: The Men".  Since then, they've released a matching set of female survivor entitled, amazingly enough, "Apocalypse Survivors: The Women".  It was my birthday recently so I treated myself to some of these newer models.  At least, I ordered the box - the family intercepted the delivery, wrapped the kit and handed it back to me on the big day.

Most of the women in this kit are healthy, slim adults, probably between 20 and 40 years of age.  I find that slightly disappointing as it doesn't reflect real-world demographics particularly well.  However, it's arguable that the older or younger or less fit individuals haven't survived whatever apocalypse has struck.  Or, more likely, Wargames Factory are pandering to a male audience who just like "babes". 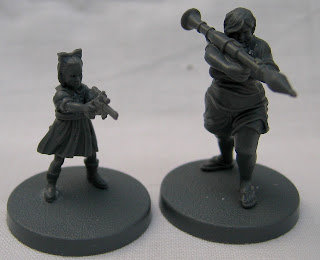 Thankfully, 2 of the figures in the kit buck this trend.  Firstly there is the obligatory child; a decent model wielding a very big pistol.  The second woman can only be described as "plump" or worse, though I wouldn't say it to her face as she seems to know what to do with her rocket launcher.

Note that these 2 models have a restricted choice of heads because of their body shapes and sizes. 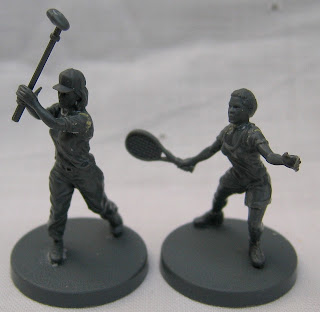 The golf club is fairly common in zombie apocalypse figures.  It's well executed, though I do wonder about how it will survive the rigours of tabletop game, since the scale width of the club makes it very thin.  The tennis racket is nicely different, though possibly of little value to a survivor.  Still, I like to think that some of my models represent "Day 1" survivors who are just encountering the apocalypse and are still equipped with whatever they had at the time.  They can't all be heavily armed veterans! 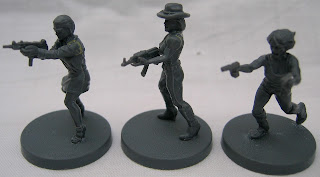 3 more women, this time ones who have acquired some significant firearms.  I don't really have a strong feeling about these: the sculpts and moulding are good, but heavily-armed gun babes just aren't my thing. 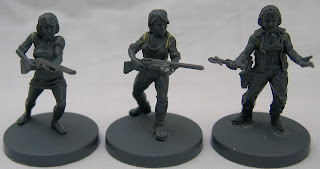 On the left is a model where I suspect that the labelled arms do not match the correspondingly-labelled body.  I say this because the shoulders just don't seem right - a high right shoulder like that should probably have a raised arm to match, perhaps striking with a knife or machete.  It's possible that I made a mistake in reading the labels for these parts, but it just shows that care and planning are needed with these models.

I've nothing much to say about the middle figure, except that (to a British eye) a shotgun is a much more likely firearm for a civilian than anything automatic.

Lastly, on the right, we have my favourite model from this bunch.  She's dressed in baggy, casual clothes that look much more practical for the apocalypse than all the mini-skirts and tight trousers.  In her hand is a pipe bomb; I've fitted a satchel containing several more to her hip.  I just love the attitude that this model has: she looks completely unafraid of whatever situation is facing her!

I have mixed feelings (mostly positive, mind) about the extra "accessory" frame included in this kit.

An excellent set, cheap and well sculpted & moulded - if you want heavily armed female survivors.  There are typically enough arm/weapon variations to make 20 different variant models, though I suspect that some more obvious repetition will creep in for models 21 through 30.  With a little conversion and some thoughtful use of colour schemes and of the many different heads, it would be possible to make all 30 models quite distinct, or indeed to disarm some or all of them.