HOTT: The village of Pao-ting shih 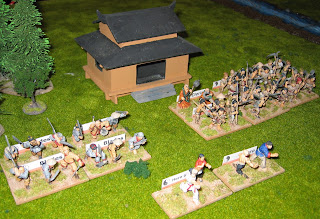 Once again, the Black Mountain Goblins are on the move.  This time a raiding party is heading for the peaceful but remote village of Pao-ting shih.  The leader of a nearby monastery (Abbot Chao Kung) has foreseen this attack and has summoned Kung Fu warriors to aid in defending the local peasants.  He has also sent a plea to a band of mercenaries who are slightly further off, in the hope that they will side with their fellow humans against the green menace.  Will these motley forces be enough to stave off disaster? 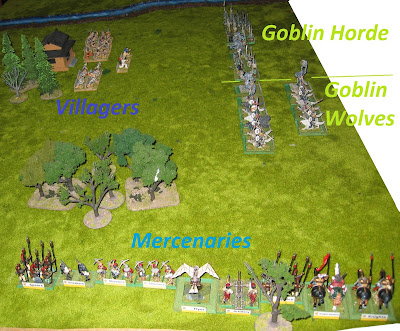 This is a 48AP battle using the Hordes of the Things rules, so there are 2 commands on each side. 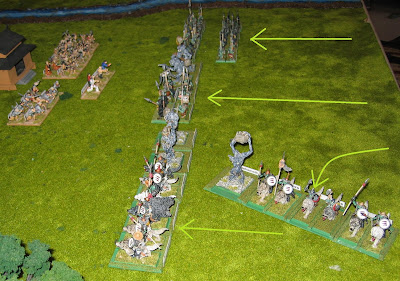 Masses of goblins advanced as fast as they could towards the village, intending to outflank the defenders on both sides and overwhelm them.  A few of the wolf riders peeled off to face the approaching mercenaries, hoping to delay them whilst the rest of the goblins did their grisly work. 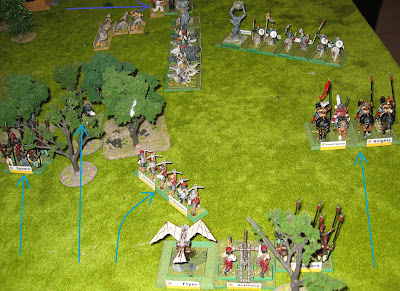 In response, the Kung Fu heroes charged the goblin warbands, without much success on either side.  Bartolomeo Crespi, the leader of the mercenaries, led his small body of knights to meet the goblin riders, whilst his crossbowmen and artillery covered the open space beside him.  Some of the mercenary foot troops, including a pair of assassins, moved forward through the woods. 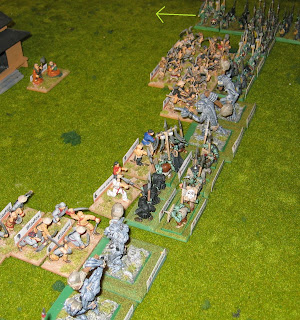 Chao Kung sat in front of the village, meditating as the defenders and attackers engaged all along the line.  Initially there was a lot of pushing and shoving, but the villagers were generally holding their own.  However, there were just too many goblins and a large column of green meanies started to outflank the battle line to the north. 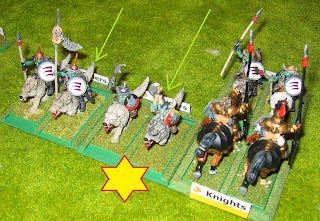 Amazingly, the first casualty of the day wasn't one of the hordes from either side, but rather it was the mercenary knight general.  Bartolomeo Crespi and his bodyguard were set upon by wolf riders and fell to a 6-1 dice split!  Although the mercenaries didn't panic when their leader fell, the lack of a commander did limit severely their ability to move in the future. 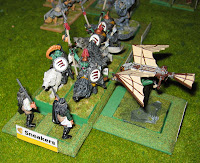 In revenge, the assassins leaped out of the woods and attacked the general of the wolf riders, who just happened to be at the end of the first line of attackers.  The flying machine joined in as well (the mercenaries rolled a '6' for PiPs on the turn following the death of their general).  Taken by surprise, the evil goblin leader was quickly dispatched by the furious assault.

Let's see: only 2 elements removed so far - but they're both generals!

The Abbot Strikes Back 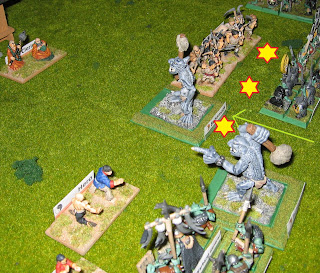 A sudden flurry of goblin successes wiped out half of the villagers.  Although the Kung Fu heroes further south were holding their own, Abbot Chao Kung suddenly looked very vulnerable to the large troll that was bearing down on him. 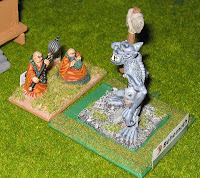 Alone on the very entrance to the village, Chao Kung and his deacon faced the foul-breathed monster.  As it turns out, clerics in HOTT aren't too bad in combat - they're not as powerful as heroes, of course, but still are capable of holding their own against many opponents.  In this case, the abbot was unmovable and the troll retreated in confusion, its tiny mind unable to figure out why it was retiring. 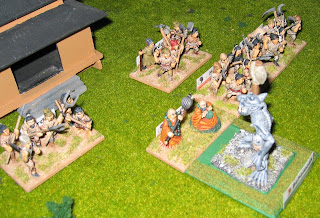 Then, suddenly, many fresh hordes of peasants appeared out of the village.  Encouraged by this, the abbot led them forward to drive off the attacking behemoth. 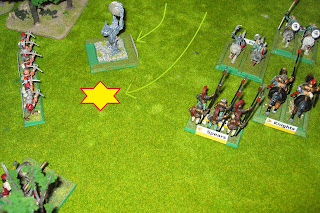 In the south, meanwhile, wolf riders and a troll attempted to attack the mercenary crossbowmen.  This was something of a disaster as the wolves were instantly destroyed and the troll was driven back (remind me not to attack shooters with riders ever again!).  The troll then stood around stupidly for several turns, picking crossbow bolts and cannonballs out of its tough skin, until it lumbered off back to the north (i.e. when I finally had enough PiPs to move the dratted thing!). 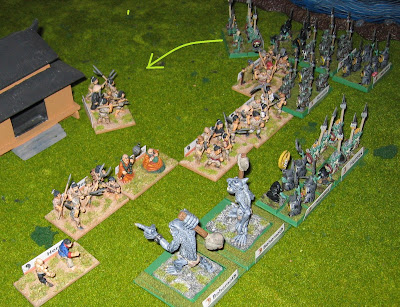 There was deadlock in most parts of the battlefield by this time.  The southern goblin command (the wolf riders) eventually collapsed due to casualties, but the leaderless mercenaries couldn't reposition their forces quickly to aid the villagers.  In the north, the lines of attackers and defenders were fairly evenly matched - apart from in the extreme north, where the large goblin column started to move again to encircle the village. 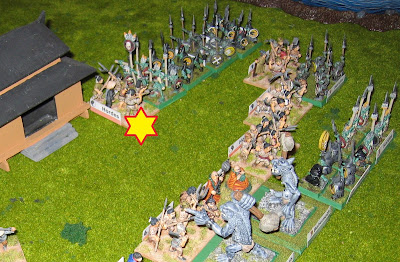 Firstly, the flank attack wiped out the single base of villagers that stood between them and their goal. 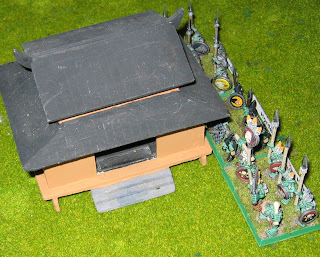 Then the victorious goblins spread out and attacked the village itself.  Let's see: the attacking horde base has a combat rating of '2', while the stronghold gets a combat rating of '6', reduced to '4' because of the 2 goblin supporting units.  So the goblins get d6+2, the village gets d6 + 4.  A tie is no use for the goblins so to win they need a roll that is 3 higher than the defenders.  Goblin roll: '5', village roll: '2' - attackers win.  The greenies break in to the stronghold, ransack homes, terrify small children and generally make a nuisance of themselves!

This battle could have gone either way, I think.  The early loss of both the opposing generals in the southern part of the table really limited those armies from taking much further action, so it was left to the 2 northern commands to slug it out.  Surprisingly, the good heroes were ineffectual against the double-ranked goblin warbands and the trolls didn't accomplish much either.  In the end it was the hordes weight of numbers that tipped the balance.
Posted by Colgar6 at 11:22