I've been making slow progress with my model-making projects recently.  At least it seems very slow, though maybe that's because I am dividing my attention so many different ways.  Each separate task doesn't advance by much, but maybe the total output is reasonable.  Anyway, here are some things I've been working on over the last month or so. 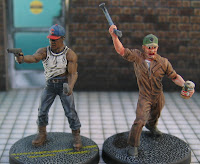 These figures are both from Wargames Factory.  I think they're very well proportioned and sculpted plastics.  Only time will tell if they are robust enough to take handling... 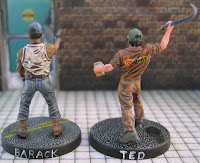 A slightly unfortunate angle here for the guy on the left.  Before anyone else says it, he looks like he's taking a leak.  While shooting someone.  It's really not like this - just look at the front view!

I've painted this Studio Miniatures plastic zombie up as a prisoner.

It's hardly an original idea, but these "smock" bodies from the kit work well for such a costume.  I wish Imy hand was steadier when it comes to lettering, though! 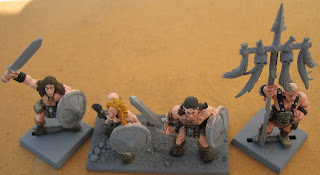 I don't normally show part-completed pieces, but today I'm making an exception.  These are some of my part-painted 28mm barbarian army for "Hordes of the Things".  There's still a long way to go with them and I'm hoping that merely displaying them here will give me enough momentum to carry on painting.  This lot have their bodies and clothing mostly finished, but weapons, hair, shields and bases still need work.  I might add some war paint as well. 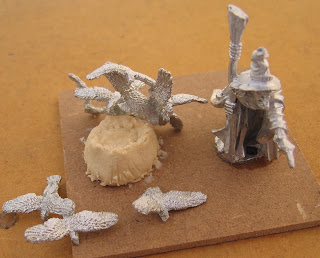 Here's another part-completed model.  In this case, it would be fairer to say that it's only part-started, perhaps.  It will be the magician general for my "Wicked Witch of the West" Hordes of the Things army (from the Wizard of Oz, of course).  As well as the witch herself, I plan to have flights of crows decorating the stand, since in the book she sent such birds to attack Dorothy's group.  Rather than just having a flat base, I intended the crows to be flying over a tree stump - it'll give them a bit more height and add some useful texture.  The yellow lump of filler on the base is my first attempt at sculpting a stump, though note that I haven't done any roots or stuff like that yet.  I'm not very happy with my sculpting so far... 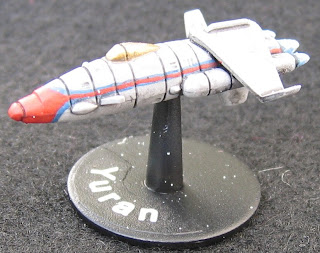 Lastly, here's the finished second ship from my plastic "Space Battleship Yamato" kits.  This is obviously a small craft and I'll probably use it in 5150: Fighter Command as a civilian vessel - a space yacht or a fast courier would seem appropriate.  To be honest, I don't much like the design of this vessel and I really wish I'd modified it by cutting the "wing" into 2 halves and repositioning it - but instead I built it straight "out of the box".  Ah, well.