In my last post on the female apocalypse survivors from Wargames Factory (http://colgar6.blogspot.co.uk/2013/09/plastic-apocalypse-survivors-women.html), Zabadak observed that every build of the "fat woman" on the internet seemed to be armed with a rocket launcher.  I realised that this was right: the default weapon for this body is indeed the RPG.

Another follower (Simon Quinton) responded to my complaint about the lack of empty-handed arms in the kit by suggesting the use of arms from Wargames Factory's female zombie kit.

Between them, these comments got me thinking about what might be done differently.  This article is a quick response to those challenges.  I've got 3 Wargames Factory kits ("The Men", "The Women" and "Zombie Vixens") that should be more or less compatible with each other, so let's get creative.

Each of the 3 identical frames in the women-survivors kit has 1 of these fat bodies.  There are 2 alternate heads to match, but on the same frame there is only 1 weapon option: the rocket launcher.  That's all very well for 1 or maybe 2 models, but I don't really want 3 fat women with missile launchers. 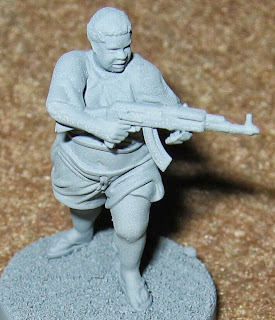 Staying within the same kit for now, the "extra weapons" frame has a different option for this body.  The fat woman can be armed with an AK-47 instead.  Great: fat lady with automatic rifle!  Well, maybe: the weapons frame only has a single copy of this option and in any case I'm not a big fan of heavily-armed civilians.  A few are OK, but I would prefer most of my figures to have either melee weapons or nothing at all. 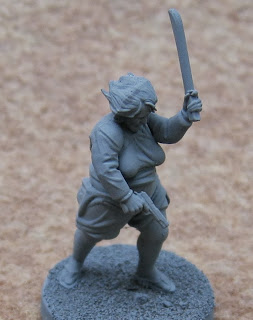 For my 3rd copy of this body, I raided the other Wargames Factory survivors kit: "The Men".  It would have been really something if the arms from "The Women" and "The Men" were completely interchangeable so that arms for male body "G" also fitted female body "G", for example.  Sadly this isn't the way it works so I had to select parts based on the amount of clothing and the relative position/animation.

A little bit of filler was needed on this figure to hide gaps, but overall the parts fitted well.  Note that this model uses a different female head; it's not one of the official "fat" heads.  Works for me...

So what else can we do? 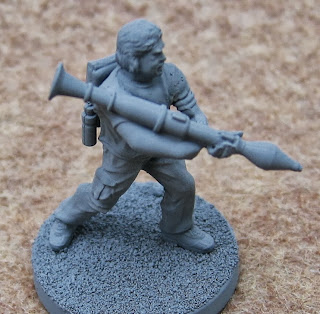 Right, let's mix up a few more parts.  Here's a male body from "The Men" armed with the rocket launcher from "The Women".  It works well enough for me (though I can now see some mould lines that I've missed when cleaning this miniature.  Bother; I'll need to go back and fix those).

This is a body and head from the "Zombie Vixens" kit, to which I have added an arm with a machete from one of the other 2 kits (I can't even remember which).  The occasional zombie should have a weapon, I think, if only to stop my "All Things Zombie" players from getting too cocky!

Actually, if I'd used a complete left arm and a non-scarred head then I think this model would have made a very good survivor instead. 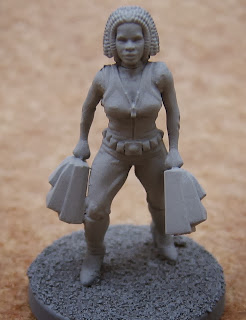 It works the other way round as well.  Here is a body from "The Women" made up with arms from the "Zombie Vixens" kit.  I think I still need to do a little filling on the arms, but otherwise this is a decent civilian (though probably not for games much past Z+1 ?) . 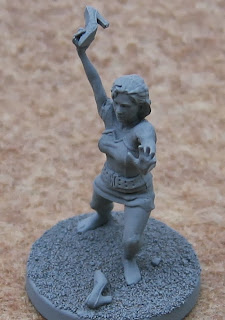 Lastly, we have another "early days" survivor.  She's made up mostly from "The Women" (including the shoes!), but I've used Zombie Vixen arms on her.  The right arm is straight from the kit, but the left hand has been repositioned to be fending off an attacker rather than the default zombie "reaching out" position.

It's obviously possible to mix parts from the 3 kits mentioned.  Some of these conversions have required a little extra cutting or filling, but none of them were hard to do.

I think I'd avoid trying to swap bits with the earlier Wargames Factory (male) "Zombies" kit as it contains a very different style of figures.  However, I'm now wondering whether I could swap bits with the plastic zombies from Studio Miniatures.  Mind you, I don't know when I'll have time to paint these models as it is; it's not as if I really need more survivors or zombies!