Right, we're well into Zomtober 2013 now; this is the second week (see here if you don't know what Zomtober is).  Once again, I'm going to present a small duel between a survivor and a zombie.  So, without further ado, here they are:

Once in a while, any long-term model-maker comes across a figure that is just right.  So it was with "Joan", the survivor with the pipe bomb in her hand.  She's been built from Wargames Factory's "The Women" set, without any conversions or additions.  However, the moment I had selected the parts I wanted and had glued them together, I thought that I had something special.  I've tried to make the painting fit my vision of this survivor and overall I'm very pleased with the way she came out. 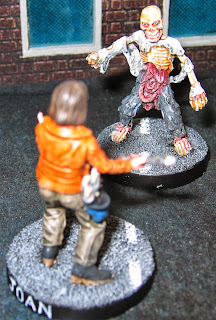 Facing her is a very skeletal zombie from Studio Miniatures.  This came as part of my Kickstarter reward a while ago; I think that he (she?) was created especially for that event and isn't generally available. In my mind, he's a "smartie" zombie, or at least he's retained some level of threat instinct.  He's clearly a bit taken aback by the defiant attitude of the woman and is pausing to consider his next move. 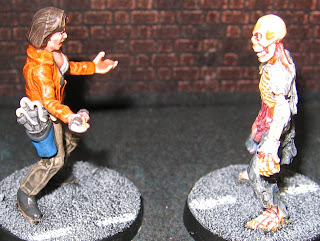 So, who will win this duel?  If Joan can ram her pipe bomb into the zombie's exposed rib cage then it's all over.  However, he may be too cunning to let that happen!