Back in the day, there were 4 human factions for the VOID 1.1 Science Fiction game, as well as 1 alien race.  When the manufacturer, i-Kore, went bust, I bought heavily into 3 of the armies: the Junkers (despotic, brutal dictatorship), Viridians (fervent ecologists) and also the Syntha (technologically-boosted cyborgs).  Many people were selling off the VOID miniatures cheaply, which was great for those of us who just wanted to collect metal!  Note that these ranges are still available; they're now owned by Scotia Grendel.

Many of my figures from this period are still in blisters or shrink-wrapped.  However, recently I thought it would be useful to paint up some Prosthene Marines since my Syntha force is probably the smallest of the three armies.  No, I've no idea what "Prosthene" means.  I'm also unsure what makes these guys "marines", though I suspect strongly that the guys at i-Kore just thought it sounded cool...

So here we have it: 12 Syntha Prosthene Marines.  These are fully-armoured, though I'd rate this as "light" protection in most sets of rules as it doesn't look especially thick.  Of course, a couple of soldiers have taken off their helmets, just to show that they are sergeants.  At least, right up to the point where a shell splinter or stray plasma bolt to the head turns them onto "ex-sergeants".

I've painted these up to "table" standard rather than my more usual "detail" level.  Mainly this is because I lost a lot of interest in the mini-project almost immediately after removing them from their blisters!  By that time they were taking up a lot of space and I have a new house rule (since January) that any model which goes on the workbench may only be removed when it is completed.  Consequently, I rushed the painting for these models a bit and skimped on some parts. 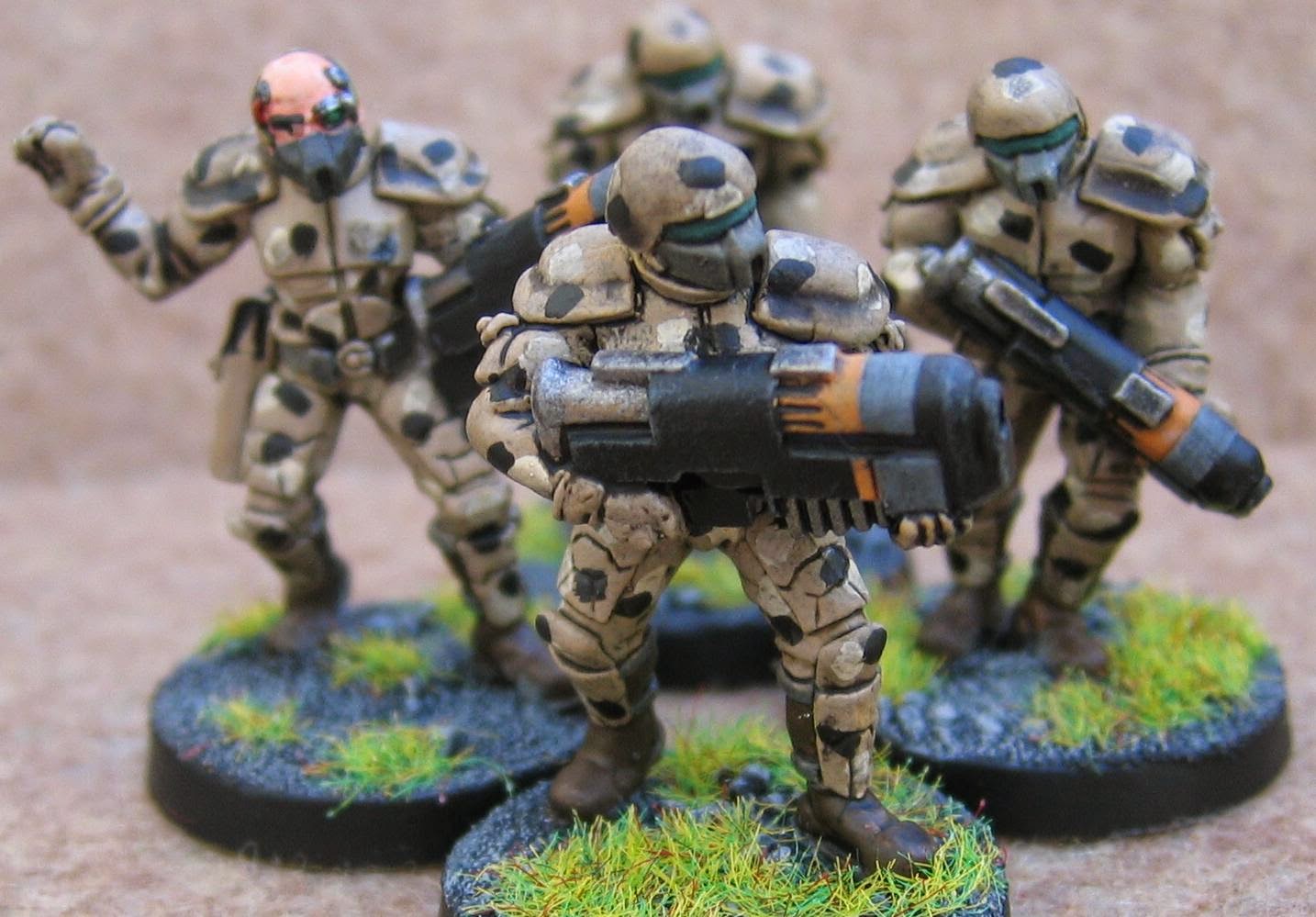 8 of the 12 marines are armed with the "pulse rifle"; a fairly standard oversized sci-fi weapon.  Arguably the background fluff makes this plausible, since these soldiers are supposed to be technologically-boosted humans with above average strength.  Make of this what you will...

If it wasn't for the rather large guns then I'd say that these models could quite easily be used in a hard sci-fi game, or even as near-future combatants.  Actually, there is another variant of the Prosthene Marines who are armed with the somewhat less bulky gauss rifles, so they'd work even better as "realistic" futuristic troopers. 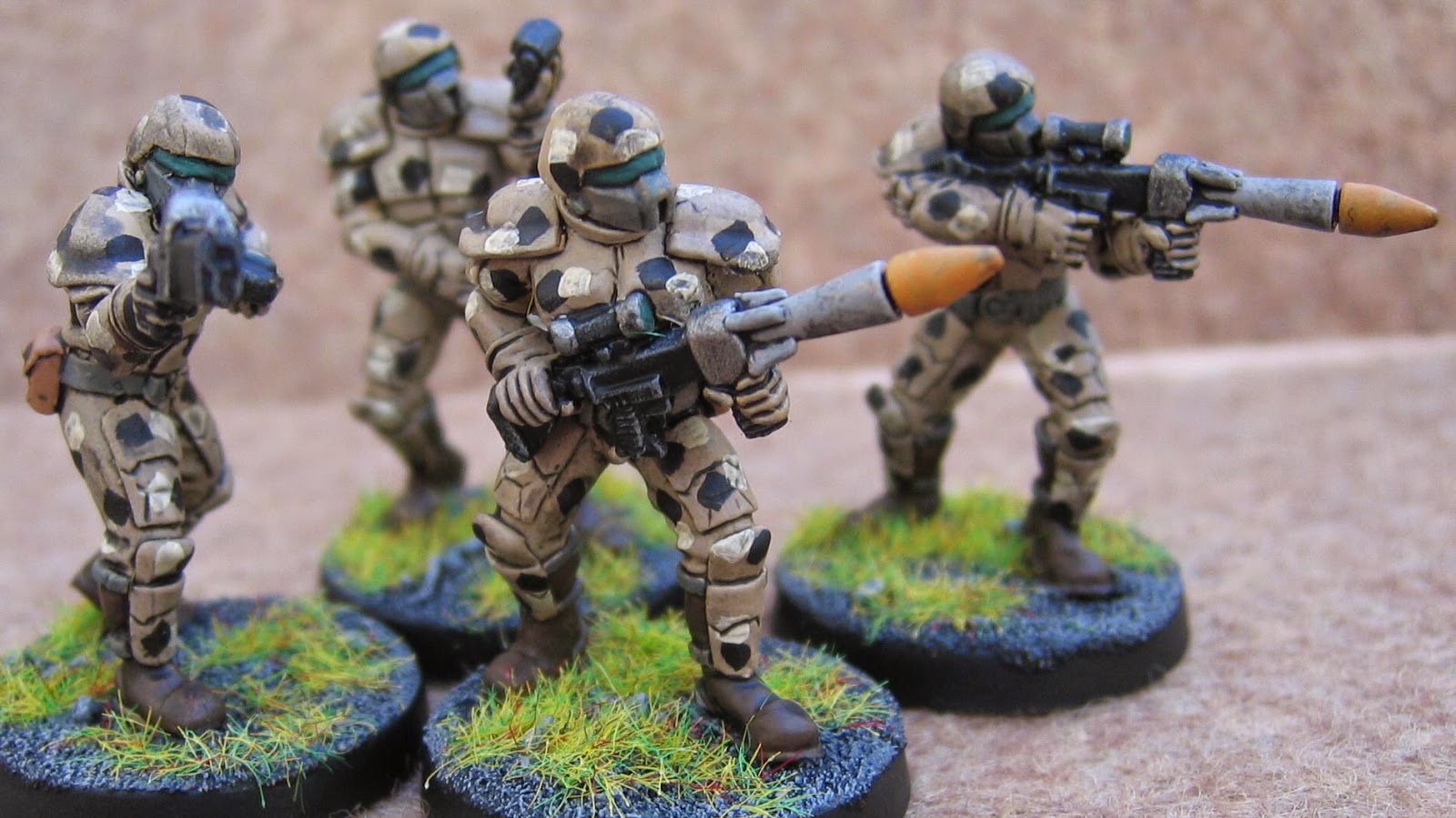 The remaining quartet consists of a pair of rocket launchers and also a couple of "targeteers".  Now, having forward observation officers (FOOs) isn't in itself a particularly radical concept.  It does make a refreshing change from the normal sci-fi infantry support weapons of machine guns, rockets and maybe a flamethrower, though.

For me, the things that make the targeteers rather more interesting are that firstly they are part of the regular squad, as opposed to being a rare, attached asset from a different branch of the service, so they're very common.  Secondly, once they have "painted" a target, the massively parallel communications network in the Syntha army allows anyone or anything with smart weaponry to fire at that target immediately, whether they can see it or not, without any indirect-fire penalties.  That capability could lead to some very interesting tactics!
Posted by Colgar6 at 20:31