As a boy and a young man, I was very fond of the works of H. Rider Haggard.  Most people in the English-speaking world (and maybe beyond?) will be familiar with "King Solomon's Mines" and "She", but he wrote many other books as well.  A few of his books have other settings, but the majority of the stories occur in central or southern Africa during the colonial period.

H. Rider Haggard's books are probably best described as adventures with a touch of the supernatural.  Are the curses of a witch doctor real, or was it just bad luck that her enemies became trapped?  Do ghosts roam the ancient ruins, or is it just a cold draft and a sense of claustrophobia?  Is the beautiful white girl really able to see the future, or is she just exceptionally observant?

I also like the fact that in a number of Haggard's books, (black) natives are the heroes or heroines.  Indeed, white Europeans don't always play more than the most passing role; there are noble and villainous members of all races.

So, why does any of this matter now?  Well, when you add in similar types of stories such as Conan Doyle's "The Lost World" and Jules Verne's "A Journey to the Centre of the Earth", not to mention the huge number of Tarzan books and films, there is an excellent genre of stories which inspire me to create games of exploration and adventure.

Which is all a very long-winded way of saying "have a look at my 28mm African expedition miniatures"...

Like all of my explorers, these models are from Foundry.  Indeed, most of these models come from a pack of well-known real life explorers, but I have my own names and characters for them.

I'm somewhat dismayed to notice that many of these models have chipped and scratched paint.  Maybe their box was shaken about some time, or perhaps they're just packed too tightly?  Either way, here is another set of models: 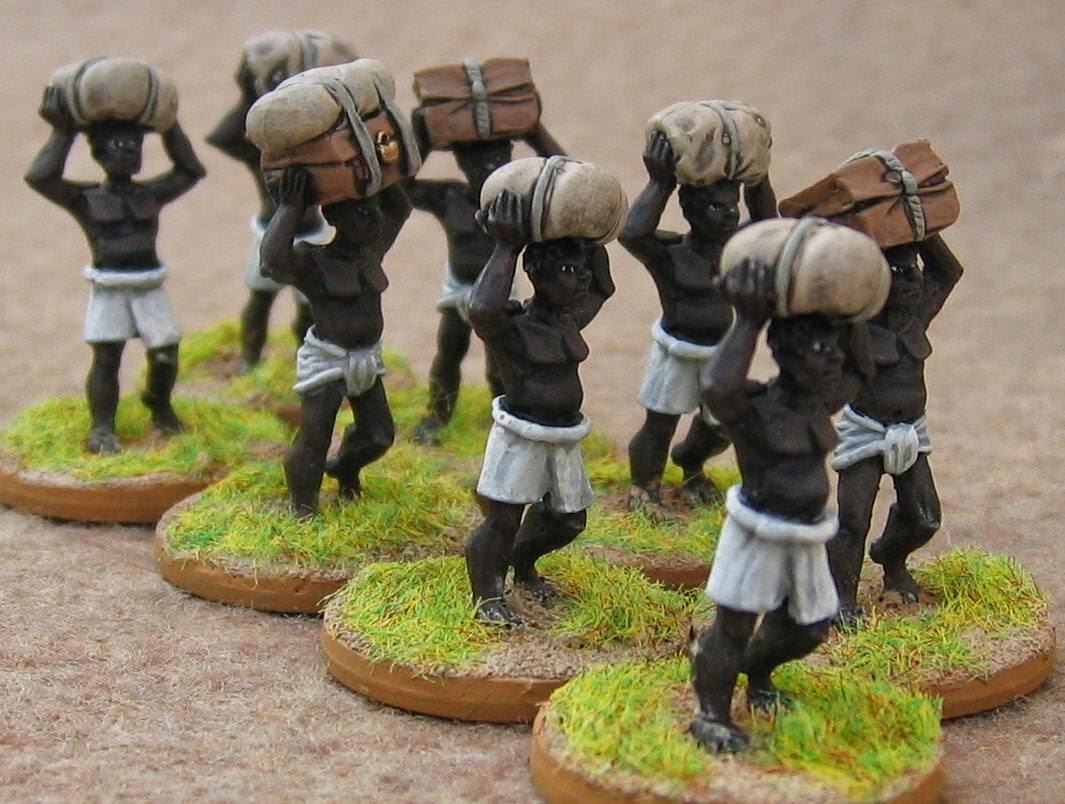 Of course, any expedition needs a large collection of porters to carry all their tents, spare Holland & Holland elephant guns, cases of gin, journals and so on.  These figures are from Dixon miniatures, from the Dahomey Wars section.  They're a lot cheaper than the Foundry bearers and just as useful!

Usually these models have fought against my prehistoric mammals (some of the large beasts are here: megafauna, though I have a lot of smaller critters as well).  What I'm lacking at the moment is much in the way of human opposition, though I do have some Neanderthals and a few figures that I could use as semi-fantasy slavers.  To get properly into the pulp adventure spirit, games should also include plenty of traps such as quicksand, man-eating plants, hornet's nests and improvised bridges over ravines.

Oh, I do also have a not-Tarzan model, though he's only part-painted at the moment...